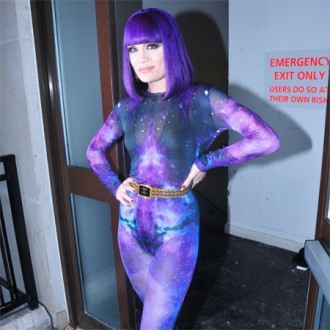 Jessie J was named Best Female Artist, Best Newcomer and Best Song, but wasn’t able to make the show – held at London’s Roundhouse venue – to collect her trophies as she was filming a video with James Morrison.

She instead tweeted her fans – whom she refers to as Heartbeats – writing: “Wow wow wow! Im dancing around! Btdma ive just won #bestnewcomer amd #bestfemale im so happpyyyy!!!! Thank you #heartbeats for your support (sic).”

‘Heart Skips A Beat’ singer Olly Murs took home the trophy for Best Male at the awards, and appeared extremely pleased to win.

He told the crowd: “I’ve never really won anything, so do get this is really incredible, thank you.”

Kaiser Chiefs also took home a trophy for artist promotion for their fourth album, ‘The Future is Medieval’, which was originally released over the internet with fans able to chose which tracks from 20 they wanted to include on the album.

Ahead of receiving the award, singer Ricky Wilson told BANG Showbiz: “I think that at the end of the day, even though we’re very proud of the idea and all that, we’ve most proud of this body of work than anything we’ve ever been proud of before.

“[Keyboard player] Peanut always says he’s not proud of anything, but I don’t believe him.”

For more information please visit www.btdma.com or watch the show on ITV2 on Monday October 3 at 10pm and Friday October 7 at 7pm.

Full list of winners at the BT Digital Music Awards 2011:

Best Independent Artist or Group in association with I Like Music Winner: Adele

Artist of the Year in association with Digital Spy Winner: The Streets