Jason Derulo has fractured his neck rehearsing for his tour. 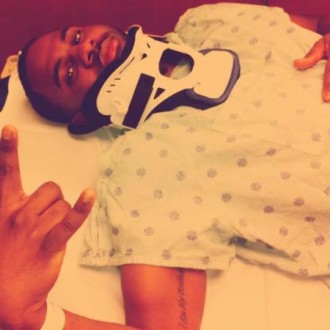 Jason Derulo has fractured his neck.

The ‘Don’t Wanna Go Home’ singer hurt his neck while preparing for his forthcoming tour, and posted a picture of himself in a neck brace on twitter.

Alongside the picture he wrote: “I fractured my neck doing tumbling & acrobatics 4 tour! Always tryin 2 push boundaries 4 YOU! Like my new chain? 😉 (sic)”

The singer is not thought to be too badly injured and isn’t expected to cancel any dates in his European tour, which starts in Glasgow, Scotland, on February 23.

Jason recently tweeted how great he feels about his success over the last year with the release of his ‘Future History’ album, writing: “2011=AMAZING! 2 more top 10 singles, Future History release, 1 of people magazine’s sexiest men alive, BMI sng writer of the year… Crazy!”

Jason, 22, has always worked hard at his career and previously admitted he doesn’t get enough sleep, and is hard to wake up.

He said: “I sleep about four hours per night and I cannot wake myself up. Someone has to wake me up by either banging on my door or physically shaking me.”