Hurts 'wrote songs on a doormat'

Hurts' Theo Hutchcraft revealed the duo used to write all their tracks ''on a doormat'' when they were aspiring musicians. 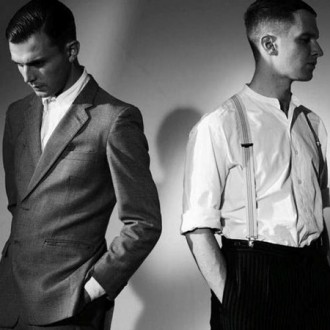 Hurts wrote all their tracks “on a doormat” when they were aspiring musicians.

The synth pop duo wowed the crowd at London’s Somerset House last night (14.07.11) with a highly-charged set, and admitted playing in such an iconic venue was an honour.

Addressing fans, singer Theo Hutchcraft said: “We’re just two boys from Manchester who wrote all our songs on a doormat. We never thought we’d get to play in a place like this.”

Accompanied by a male tenor and full band, Theo and bandmate Adam Anderson stormed through an emotional set, which even saw the 24-year-old singer collapse onto the floor on a number of occasions.

Tracks included ‘Wonderful Life’, ‘Sunday’ and ‘Illuminated’, while the duo’s penultimate song ‘Stay’ was accompanied by masses of red ticker tape being fired into the crowd.

After finishing the evening with a rendition of debut single ‘Better Than Love’, Theo explained the gig – which was part of this year’s Summer Series – meant a great deal to him.

He exclusively told BANG Showbiz: “Playing here tonight meant so much to both of us and I’m just so glad everyone enjoyed it as much as we did.”

For more information on the Somerset House Summer Series, go to www.somersethouse.org.uk/music.

For the latest news, information and exclusive offers from American Express – who are the headline sponsors for the Summer Series – or to sign up to the events newsletter that will put you in the know, please visit amex.co.uk/music.