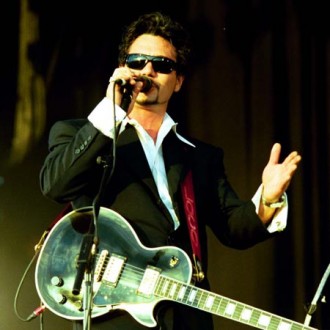 Huey Morgan thinks record companies are “the past”.

The Fun Lovin’ Criminals frontman made the decision for his band to release their recent live album ‘Fun, Live, and Criminal’ through website Pledge.com because he doesn’t think official releases by record companies use the internet in the right way.

He said: “Record companies are the past. When we released our album ‘Loco’ in 2001 we were like, ‘OK, how are people going to hear it?’ And the record company were like ‘Well, look we’ll have some billboards.’ And I said,’ But yes, how will they hear it? People don’t buy CDs any more, there’s a thing called the internet now and Napster and downloads and things like that.

“With pledge.com, people can get the record if they want it, and if they don’t, they’re not having to see my ugly face on a billboard or a TV advert. People don’t want to be force fed.”

Though the live album features two new tracks from the group, Huey admits he is unsure if they will release any more new material, although he insists the band will never split.

He said: “There’s two new tracks on the album but I don’t know when there’ll be full new album.

“We’ll always still be in the band but we’re all family men now. Being a rock ‘n’ roll star is fun – when you’re 27, but you don’t want to be the grey haired guy sitting there in the corner.”

Huey Morgan is presenting from the red carpet for Barclaycard Unwind at the 2011 Barclaycard Mercury Prize Albums of the Year. Fans can leave questions for him to ask at facebook.com/Barclaycard