On screaming as an act of radical reclamation. 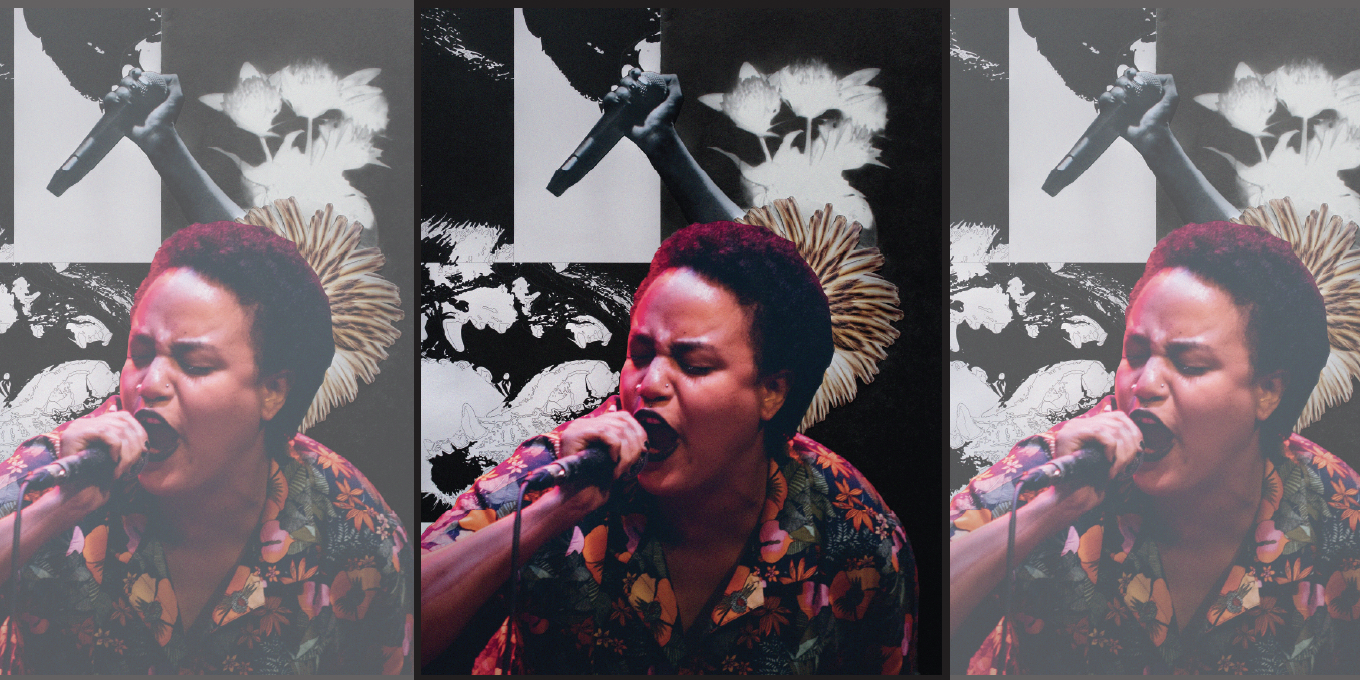 When I watch an artist perform live, I typically wait expectantly for a certain definitive moment that jolts the rhythm of a set. With Janelle Monáe, it came up during the final chorus of “Cold War,” when she released a scream just outside of her control, ending the song with an exhaling outcry. With Inuk artist Tanya Tagaq, it happened at a moment when the melody sped up: She came face to face with one of her vocalists and through the colossal range of her throat singing, a hard-fought legacy of protest could be heard. The best of the best—the Ninas and Whitneys of the world—have built their careers on these moments: when they somehow manage to inflate a song to be bigger than its arrangement, launching their voice into the abyss and landing it with perfection.

Recently, I saw Lido Pimienta perform at Festival de Musique Émergente in Rouyn-Noranda, a former mining town in rural northwestern Quebec. It was the first time in more than 18 months that I’d attended a festival where I was watching a show on an outdoor stage surrounded by hundreds of people. Toward the end of a set rich in intricate traditional Indigenous Colombian folk melodies, her clear pitched falsetto dropped a few octaves. Then, for just a few beats, Pimienta, who played in death metal bands growing up, released a guttural growl overtop an ambient loop, coordinating her lyrical intent with the sound of someone making a soul-baring statement. That time, like every other time before it, when I heard the unmistakable sound of surrender, a line of goosebumps charted a path from my jaw to the back of my neck. I felt my heart rate lull and steady.

For as long as I can remember, I’ve been unable to look away from moments of unrestrained extremity in music, whether they’re intentional or not. I’m a fan of heavy music in all its iterations. The best way I can describe it is that I’m like an insatiable mole peeling away at an onion, tearing through layer upon layer as I look for a wellspring of a sound more jarring, more heart-stopping, more capable of making me abandon all of my long-held tastes and preferences. When it comes to extreme metal, describing what it “sounds like” is straightforward enough—it usually involves distorted, low-tuned guitars, rapid-fire blast beats and relentless bellowing vocals. But few elements of heavy music are more identifiable and beloved than the voice and its capacity to transform into an instrument with power and potential.

Metal isn’t unique in its devotion to stretching the limits of vocalization. On the long list of things that are said to help with mindfulness, there are plenty of methods that call on elevated uses of breath and voice to foster feelings of tranquility. Last year, a Vogue writer described her experience with the Pyramid Breath Method, a form of sound-release therapy that involves breath work akin to screaming and crying. Nicole Kelly, host and producer of “Divesting From People Pleasing,” a series on The Heart podcast, talked about a group workshop she attended in which, to confront internalized shame, she got on all fours and then flailed and screamed to connect with her inner beast. And an iconic 2005 training video by legendary metal vocal coach Melissa Cross, who has trained vocalists in bands like Slayer, Lamb of God and Arch Enemy, is aptly titled The Zen of Screaming.

In her groundbreaking book, What Are You Doing Here? A Black Woman’s Life and Liberation in Heavy Metal, cultural critic and ethnomusicologist Laina Dawes credits the genre with freeing her from a pervasive social restraint that’s specific to Black women. “The music let me scream and vent my frustration at times when no one wanted to listen to how I felt,” she wrote. “Heavy music helped [Black women] through periods of personal strife, even when we secretly wondered how we didn’t lose our sanity.”

Black people are all too familiar with the fact that to ensure safety and protection for ourselves, we often have to be hyper-vigilant when we dialogue with the world around us. This means adjusting the volume of our voice or, once we read the room, adjusting our tone and anecdotes as a form of code-switching. It involves constant tongue-biting and concealing winces behind a tight smile. It involves contorting, curating and shrinking ourselves. There are few places where we can be loud and let our big emotions run wild and even fewer that are hospitable to screaming.

“You will stop. And you will listen to us. And you will respect the fact that there is someone onstage who [is] a minority talking about systemic oppression”

Sometimes freedom occurs in the kind of setting that the late literary scholar bell hooks (a.k.a. Gloria Jean Watkins) described, in her 1990 essay “Homeplace: A Site of Resistance,” as a site unbound by the restrictions typical of a white-supremacist society—a place where we can “restore to ourselves the dignity denied us on the outside in the public world.” I’ve seen this happen in my own circles when heavy music has nourished Black healing: when an album is recommended in a long message chain because words alone are insufficient, for example, or when my friends feel safe enough to headbang together at a show. Finding a space to not only identify rage but also loosen its tight-fitting lid and let it bubble up past its boiling point can be a radical act.

The first time Kayla Fernandes screamed onstage, they surprised themself. It was at a gig in 2018, and, in keeping with a long-held tradition, Canadian hardcore punk group Cancer Bats had asked if someone from the audience would sing a part of one of their songs. Fernandes didn’t hesitate—they raised their hand and took to the stage. “I had screamed at shows before when I was in a crowd, but I literally spent my time protesting and working at a non-profit—this was not in my realm,” they say. “But the more I was pushed and [the more] it felt like I needed to push myself to do it, the more I realized that being onstage was exactly [what] I needed to be doing.”

Now, Fernandes is the vocalist and songwriter for Winnipeg sludge-doom metal outfit Vagina Witchcraft, and they howl poems about the never-ending process of confronting the black hole of your psyche. When sung over pummelling sun-scorched riffs reminiscent of tracks by Black Sabbath and Sleep, their lyrics morph into powerful affirmations of resilience. “We like to get up onstage [when] no one knows what we’re going to do,” they explain. “Then when I ring out, like, a couple of screams, people just stop right in their place. And I’m like: ‘That’s fucking right. You will stop. And you will listen to us. And you will respect the fact that there is someone onstage who [is] a minority talking about systemic oppression.’”

To access that level of rage, Fernandes had to learn the contours of their voice. Early on, they would get weary and sore after screaming, often finishing a set exhausted. But once they started
working with a vocal coach, they took an active role in figuring out how they wanted to sound. It required developing a self-care ritual that includes napping in the middle of the day, drinking lots of water and going on walks before a show to get their blood flowing. It also involved learning to think about vocals as a total physical experience—one where they become attuned to their whole body, noticing where their arms are positioned, how they’re using their tongue and teeth, which direction their head is facing and how they’re tilting their chin. “I wanted to learn how to control my instrument in a way that [doesn’t] hurt me,” they say. “Now, I just feel so confident about it. I’m able to have power throughout the entire song without feeling like my vocal cords are going to jump out of my throat.” Ensuring they can scream and not injure themself is crucial because there are some things that need to be belted from the top of their lungs.

“[I’m] someone who has survived drug addiction, domestic violence, rape and abuse, [so screaming] feels different [for me],” says Fernandes. “It’s something I’ve never felt before: a sense of catharsis, a sense of respect and a sense of power.” The first time I listened to “Intro,” the opening track on Vagina Witchcraft’s self-titled debut album, each word resonated with me as if it were touching a nerve ending. Fernandes shrieks a monologue that name-checks Maya Angelou, Angela Davis and Sojourner Truth, their voice becoming more emphatic and blood-curdling with every line: “I write this for those who, like me, spent three hours flattening every bump, every kink and every shred of their dignity to subscribe to a facade. I will no longer shut my mouth.”

That sense of power felt communal, raw and uncompromising. It also helped clarify something for me: To bear witness to someone shedding that kind of weight requires you to be a listener who’s equally involved in their journey; to see someone hack away at their innermost self means you’re seeing their true self. It’s giving them permission and holding space for them to scream at you, because only then can it feel like they’re screaming on your behalf, revealing to the world what can sometimes feel impossible to say out loud.