How BTS Reinvented The Boy Band

The reinvention of the boy band. 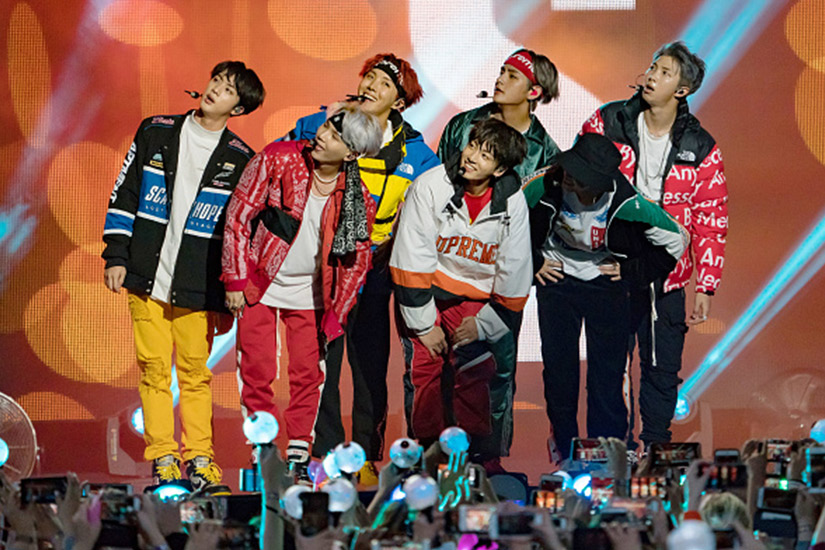 Every generation has them. Come of age in the ’80s? You probably slow danced at prom to New Kids on the Block’s “I’ll Be Loving You (Forever).” Were you a tween in the ’90s? For you, there were only two types of people: NSYNC fans and Backstreet Boys fans. Were you anywhere near a radio circa 2011? One Direction told us what makes us beautiful, and Gucci campaigns were never the same again.

Yep, a bunch of attractive dudes making sweet harmony has been a musical trope since groups like the Beatles and the Jackson 5 hit the charts. The latest to set hearts aquiver? BTS. Made up of seven under-26 heartthrobs, the South Korean group has gone global faster than you used to drop your allowance in HMV back in the day. It’s the first K-pop (a music genre characterized by a blending of R&B, hip hop and pop, sung mostly in Korean with the occasional English lyric thrown in) band to win a Billboard Award, perform at the American Music Awards, go gold and have an album debut at number one. The video for the single “Fake Love” netted 35.9 million YouTube views in 24 hours, and the group’s third album, Love Yourself: Tear, was number one on the iTunes chart in 73 countries when it was released this past May. The band is also getting a ton of press—they were on the cover of Time magazine’s “Next Generation Leaders” issue and have appeared on U.S. talk shows like Good Morning America and The Tonight Show.

How has BTS single-handedly ushered in the fourth wave of the modern boy band? The short answer is: the internet. As Georgina Gregory, pop-culture expert and author of A Million Love Songs: Boy Bands and the Performance of Pop Masculinity, explains, the success of boy bands—and the way they’re marketed—tends to reflect the times in which they are formed. “Before vocal processing and music videos, young men were recruited for their ability to sing well,” she says. “Since the appearance of music television, there is more emphasis on looking good and being able to dance. [Think Beach Boys versus BSB.] Where boy bands like Backstreet Boys primarily used teen magazines, radio, TV and live appearances to connect with fans, boy bands today use sharing platforms and social media to promote their visual identity and distribute their music.” Consider the American boy band Why Don’t We, which partnered with YouTube star Logan Paul to create viral videos that bypassed traditional musical channels. Or the bandmates of the Simon CowellTM creation PrettyMuch, who seem to spend as much time on Insta stories as they do making actual music.

BTS in particular has turned social media into an art form. It was the first K-pop band to join Twitter in 2012 and in doing so tapped into a worldwide fan base and passionate following known collectively as the “BTS Army.” It even got a Guinness World Record for most retweets of a musical group (152,112, if you’re wondering) and is constantly updating fans on this medium and others. It’s a lifeline for fans—and a brilliant tool for building up the “brand.” Because, let’s be real, boy bands have always been a booming business, both for the stars and the wizard-behind-the-curtain types who essentially curate talented and attractive young men to then hawk them as a musical product. See: 1D, formed on The X-Factor; NSYNC and BSB, both brought together by the problematic pop-Svengali Lou Pearlman; and NKOTB and New Edition, the brainchildren of music mastermind Maurice Starr.

BTS is no exception: It’s a product of one of the smaller “idol pop” companies—essentially talent agencies for would-be pop stars—and, yes, is a “manufactured” group in the sense that the boys were recruited via auditions in 2010 and 2011 and grouped and groomed for stardom. They’re conventionally attractive, well spoken, likeable young men. But Michelle Cho, an assistant professor of East Asian studies at McGill University who is currently studying the band, says that the underrated key to BTS’ global success—and what makes it different from boy bands before it—is the one thing we haven’t discussed yet: its actual music. Pre-BTS, if you heard one boy-band song, you heard them all. The musical styles have changed over the years, but the subject of the boy-band canon has not. Boyz II Men’s “I’ll Make Love to You” could (lyrically, at least—no one could ever replicate Wanya Morris’ dulcet tones) stand in for any boy-band song over the decades.

The members of BTS, on the other hand, frequently write their own lyrics and songs—and sometimes things get heavy. “They’re writing about quote-unquote ‘the travails of youth,’” explains Cho. “They’re addressing a post-recession generation and saying a lot about how hard it is to get established or move in the world as an adult when you can’t find a job.” They have also spoken up about the need for more openness about mental-health struggles. It’s not your classic boy-band fodder, and it’s not the only way they are rewriting the narrative. “They’re affectionate toward one another, which is not something you see men do a lot in pop culture,” says Cho, who thinks this depiction of intimate male friendship is a draw for fans, whether they see it as homoerotic or not. “It’s the opposite of this toxic masculinity that you find in a lot of online spaces.”

That’s something that appeals to Leo Tapel, a twentysomething Torontonian and devoted member of the BTS Army. Tapel also appreciates the band’s decision to make some of their songs gender neutral. “It gives me—as someone in the LGBTQ+ community—a sense of belonging,” he says, adding that even the band’s fashion is subversive. “Have you seen the makeup, chokers and earrings that they wear? Talk about breaking gender stereotypes and redefining masculinity.”

All this begs the question: What will the next decade of boy bands bring? When the fifth wave comes (and BTS, we pray, are not singing out their days in a Vegas residency), one hopes that the changes they’ve heralded—inclusivity, vulnerability—will no longer be newsworthy. One thing that hasn’t changed from the boy-band days of yore? Tickets for BTS’ tour this fall instantly sold out…and you’re the only one of your friends not going, just like with NKOTB in 1990.

This article originally appeared the in the Winter 2019 issue of ELLE Canada.