Heaven 17 headlined the Nokia stage to close the first day of the Tramlines festival last night (22.07.11). 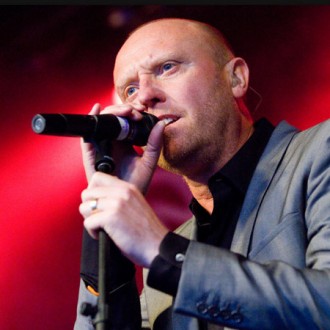 The ‘Temptation’ synth pop group played a nostalgic set, packed with their hits in the main square of their home city in Northern England.

Despite a little light drizzle over the open-air Nokia stage, spirits were high as Martyn Ware and Glenn Gregory took to the stage.

Addressing the crowd singer Glenn said: “Keep smiling and the weather will start shining, thank you for coming out, sorry we’re a little bit late, this is ‘Fascist Groove Thing’.”

After the track, he said: “That song was written in Sheffield in 1980. This is where these songs live.”

A little later in the set Glenn further reminisced about how the city has played a major part in the electronic group’s history.

He told the crowd: “It’s great to be playing in our home town, and it’s in the building next to the stage that we saw so many of our heroes; Marc Bolan, David Bowie, we saw everybody there.

The set was hit with a slight technical hitch, as the band had a false start going into ‘Let’s Make A Bomb’, instead of ‘Come Live With Me’, but they continued, building up to their biggest hit, ‘Temptation’.

After the band’s set DJs and MCs kept the party going in the Nokia Unannounced Tent until the early morning. The tent is due to see a number of prolific artists from the city join together for a series of collaborations of the course of the next two days of the festival.

Other acts to play at the Tramlines festival – which is free to the public – include Ash, The Duke Spirit, Nerina Pallot and Ms Dynamite.