Hanging out with the Haim sisters at TIFF

The coolest sisters in music came to TIFF to play a one-night-only private show. 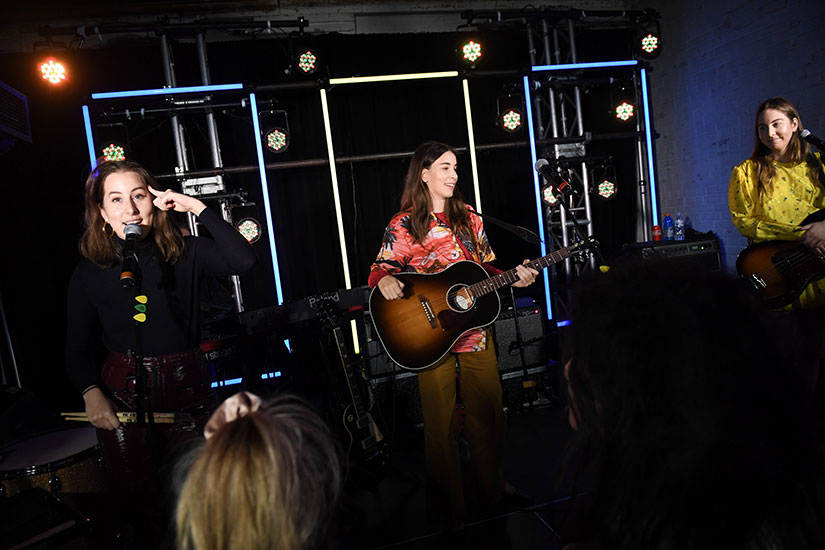 With their Cali cool girl sound and style, the Haim sisters never fail to impress. Just a few months off of their second tour where they sold out venues like Massey Hall and Radio City Music Hall, the trio came back to Toronto for a private performance at the RBCxMusic party to kick off the Toronto International Film Festival. Held at the RBC House–the arts and film and celeb hub which is the place to be during TIFF– sisters Este, Danielle and Alana were psyched to be back on Canadian soil and in the middle of the festival action.

“This is actually our second time playing at TIFF—we played here in 2014 with Ellie Goulding,” eldest sis Este  told us. “It was like a lot of girl power in the room. And obviously, we love Toronto so any excuse to come here, we’re like yes, absolutely, send me your way.”

We caught up with the sisters before the show to chat about everything from their favourite spot in the city (Kensington Market) to what kind of film soundtrack they would do (Este loves horror movies). Here are five highlights from that conversation.

On the joy of solo movie watching

Este: “It’s my favourite thing to do.”

Este: “I love the movies. That’s my happy place.”

Este: “We did a show at the Greek Theatre in LA. I snuck in to see Radiohead there when I was in high school and to play there was such a big moment for us. Paul was like, ‘Can I film it?’ and we’re like…”

Este: “One of our favourite moments of that show was when we played ‘Night So Long’ and everyone brought their lighters out. Paul, obviously because he’s a genius, just captured it so magnificently and so beautifully. I still think of that moment and I’m like it doesn’t feel real.”

On touring with rapper and singer Lizzo

Alana: “We got really lucky because she got to come on our U.S. tour with us and she’s just the best vibe. We never really party on tour because a) we don’t know how and b) no one ever invites us to anything and she was like, every night we’ve got to go out, we gotta do things. Her and her dancers and her band were so nice and so fun. I didn’t want it to end.”

On their must-have fall piece

Este: “I think we’re just obsessed with fall. I want it to get cold. It doesn’t really get that cold in LA which is kind of a bummer because we love outerwear so much and bundling up. It doesn’t really get cold enough to illicit that, however we do it anyway. But yeah, I think just like big coats and stuff that’s going to make me feel like I’m in a womb, is what I’m waiting for.”

On their  favourite designers

Este: “And Chloé obviously. They basically outfitted our tour which was such a dream.”