Gruff Rhys named his new album 'Hotel Shampoo' after a model he created from complementary toiletries. 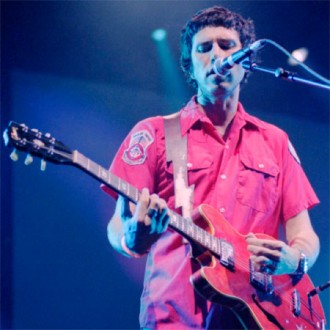 Gruff Rhys’ new album is named after a model he built from shampoo bottles.

The Super Furry Animals frontman has just released his latest LP, ‘Hotel Shampoo’, which he says was inspired by a collection of miniature toiletries he amassed while on the road with the band.

He said: “When I started touring it was such a dramatic change in my life.

“I couldn’t believe they were giving this stuff away. I decided to keep them as souvenirs, because I didn’t know how long it would go on. Then I decided to build a hotel out of them. It’s about the size of a dog kennel.

“Because I had written these melancholy songs over the same period, I ended up stealing the name of the hotel for the album, because they were connected in my mind.”

The ‘Demons’ hitmaker also claimed he feels “blessed” by his relative lack of mainstream success as it has made song writing easier.

He explained: “I enjoy writing but considering I don’t have to do anything apart from music, I don’t feel particularly pushed.

“An album takes three weeks to record, so I don’t know what I’m expected to do for the rest of the year.

“Some bands become victims of their success in that they have to tour for maybe three years after the album, which is not particularly conductive to writing. I think the key to writing is having the time to do it, so in that sense I’m blessed by my lack of success.”