Florence Welch is scared to bare her soul

Florence Welch finds it ''frightening'' to bare her soul in her songs because she is quintessentially British. 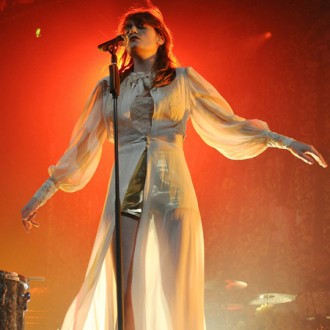 Florence Welch is scared about baring her soul on her albums.

The Florence + the Machine singer admits her British upbringing makes it hard for her to write about her feelings in her songs.

She said: “Like a lot of British people, I prefer sarcasm and irreverence. Wearing my heart on my sleeve – very frightening.”

Florence admires songwriters who are honest in their lyrics or put messages into their songs, but it is something she finds difficult to do when creating her own tracks.

However, she did include two songs on her acclaimed LP ‘Ceremonials’ which have positive messages for her fans.

She said: “For someone so conflicted, who am I to give advice to anybody? It’s such a funny, grandiose idea.

“I was thinking about positive messages on the record because I knew there would be kids listening. Like putting something in there that wasn’t just for me, like ‘Heartlines’ and ‘Spectrum’, they’re really earnest, saying don’t be afraid of who you are and follow your heart.”