Fergie named Woman of the Year

Fergie, Lea Michele and Jazmine Sullivan were honoured at Billboard magaine's Women of the Year lunch in New York yesterday (02.12.10). 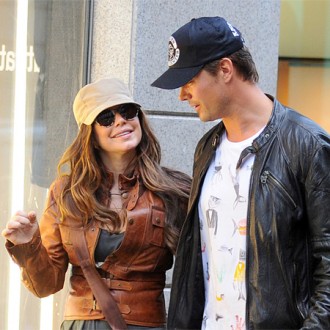 Fergie felt “humbled” to be named Woman of the Year by Billboard magazine.

The Black Eyed Peas singer was thrilled to be recognised for her musical achievements at New York’s Pierre Hotel yesterday (02.12.10), particularly as so many other females have achieved chart success in the last 12 months.

She said: “Congratulations to all the women of the year. I’m so humbled to be in a category with so many strong females in the business. For what used to be just a boys’ club, us b***hes are coming up.”

Paying tribute; the ‘My Humps’ hitmaker’s bandmates, Taboo and Apl.de.ap, praised their “sister” for the dimension she brings to the group.

Taboo said: “In 2002 we met Fergie at a studio. We were looking for someone to sing on a song called ‘Shut Up.’ When she came on, she blew us away. She was a professional, so on point and we wanted to put her on more songs. To make a long story short, thank God we put her on a lot more songs. We can attribute so many things to our success, and Fergie’s been a part of that. I’m so grateful to have her as a sister.”

Apl.de.ap added: “Not only is she a strong, talented woman with a beautiful voice, I can also talk to her about women and get girl advice from her. Congratulations Fergie – you’re my sis and my best friend. Thank you for being in my life.”

‘Glee’ star Lea Michelle was the magazine’s winner of the first Triple Threat award for her success in acting, dancing and singing, and she thanked the show for allowing her the chance to showcase her talents.

She said: I was always told I wouldn’t make it as a recording artist because I had a musical theatre voice and I wouldn’t be able to branch out into other fields and Thankfully ‘Glee’ came along.”

Also honoured at the lunch was Jazmine Sullivan, the publication’s 2010 Rising Star, who performed at the event.