Everything That Happened at the 2019 Grammys

What everyone will be talking about from music's biggest night. 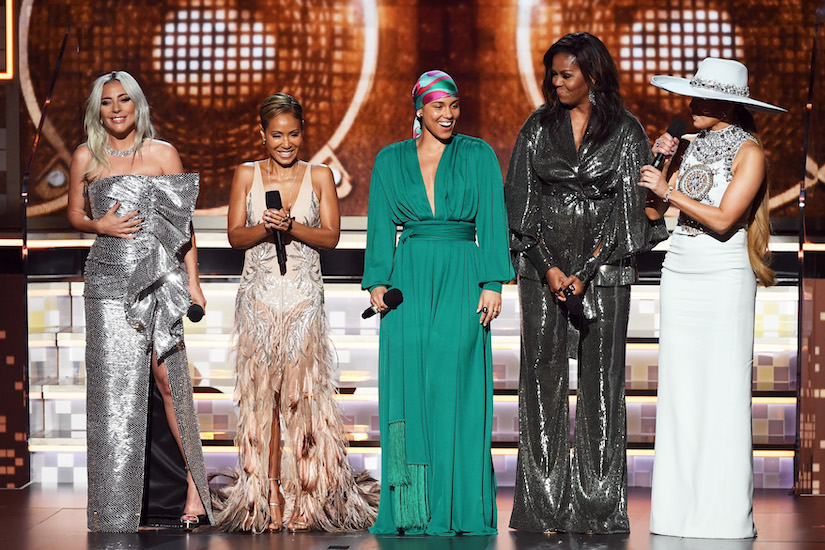 Camila Cabello kicked off the night’s celebrations with a lively performance of her hit “Havana.” The two-time nominee shared the stage with Ricky Martin, rapper Young Thug, and Latin artists Arturo Sandoval and J Balvin. Add the elaborate choreography, and this is one that definitely deserves another watch.

Who Run the World?

First-time host (but 15 time Grammy winner) Alicia Keys made sure her opening monologue set an extremely high bar for the rest of the evening by bringing out Lady Gaga, Jennifer Lopez, Jada Pinkett Smith and Michelle Obama (yes, you read that right) to talk about the power of music. “Music has always helped me tell my story,” the former first lady—who, by the way, got the loudest cheers of all the stars on stage—said. “Music helps us hear ourselves, our dignity and sorrows, our hopes and joys. It allows us to hear one another, to invite one another in. Music shows us that all of it matters.”

Lady Gaga won the first televised award of the night—for Best Pop Duo/Group Performance for A Star Is Born anthem “Shallow.” (By this point, Gaga had also already won two other Grammys during the non-televised portion of the evening.) The star was clearly very emotional as she accepted the honour, shouting out her co-star/director and leaving with a heartfelt message. “I wish Bradley was here with me right now … Bradley, I loved singing this song with you,” she said. “And if I don’t get another chance to say this, I just want to say that I’m so proud to be part of a movie that addresses mental health issues. They’re so important. A lot of artists deal with that. And we’ve got to take care of each other. So if you see somebody who is hurting, don’t look away. And if you are hurting, even though it might be hard, try to find that bravery within yourself to dive deep and go tell somebody.”

“I wish Bradley was here right now!” @LadyGaga picks up the first #GRAMMY award of the night for Best Pop Duo/Group Performance for “Shallow” with #BradleyCooper #CitytvGRAMMYs pic.twitter.com/AFSLSX6C5P

The artists really brought their A-game to the awards show, with a ton of standout performances. Best Country Album winner Kacey Musgraves performed a lovely rendition of “Rainbow,” Janelle Monáe had everyone on their feet with “Make Me Feel,” and H.E.R. wowed with “Hard Place”—and that’s just to name a few. There was also a Dolly Parton tribute—featuring the likes of Miley Cyrus, Katy Perry and the Queen of Country herself—and tbh, maybe there should just be one every year.

For those that missed Janelle Monae’s full performance at the Grammys, here you go. pic.twitter.com/Zz4iZ3icmj

Korean group BTS the first K-Pop act to present on stage at the Grammys, awarding H.E.R. with the Best R&B Album honour. “Growing up in South Korea, we always dreamed of being on the Grammys stage,” said band member RM. “Thank you to all our fans for making this dream come true and we’ll be back.”

At the end of the night, country superstar Kacey Musgraves won Album of the Year for Golden Hour, while Childish Gambino’s “This Is America” made Grammys history when it became the first-ever hip-hop song to win Song of the Year and Record of the Year. Some of the night’s other wins include British pop star Dua Lipa for Best New Artist; Cardi B became the first solo woman to take home the award for Best Rap Album; and off-air, Ariana Grande won Best Pop Vocal Album—although she wasn’t there to receive the trophy. Drake even surprised fans by appearing on stage to accept his Grammy for Best Rap Song for “God’s Plan.”