Ellie Goulding has admitted she knew she would be performing at the wedding of Prince William and Princess Catherine months in advance but kept it a secret. 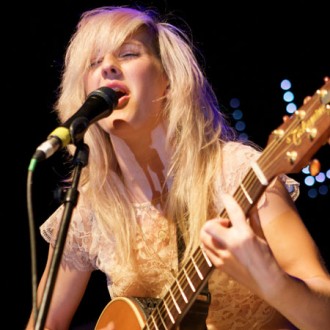 Ellie Goulding kept her royal wedding gig a secret from friends and family.

The ‘Starry Eyed’ hitmaker – who provided the entertainment at Prince William and Princess Catherine’s nuptials on April 29 – revealed she knew she would be performing at the royal wedding “months prior” to the big day, but was forced to keep the news under wraps.

She told Star magazine: “I met William at a festival about a year ago, and they asked me to perform months prior to the wedding.

“So I knew about it for a while, but couldn’t tell anybody!”

Ellie – who won the Critics’ Choice BRIT Award in 2010 – also explained while there was a “great atmosphere” at the post-wedding party, she was very “overwhelmed”.

She said: “It was an amazing honour to be asked by Kate and William. I never thought I’d feel that honoured. The atmosphere was incredible and it’s something I will never forget.

“I was nervous and overwhelmed. But it was just a fun night, a really great atmosphere. Afterwards, I didn’t believe that I’d actually done it.”