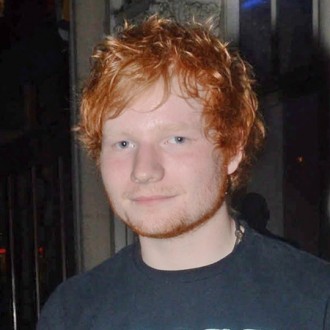 The ‘Rocket Man’ singer called his young protege to wish him well after it was revealed he leads this year’s awards with four nods last Thursday (12.01.12).

Ed told The Sun newspaper: “I speak to Elton on a weekly basis. He’s very involved. I got a talk from him after the BRITs nominations.

“He’s overseas at the moment but left me an answer phone message. He said I’ve smashed it so hard and good luck.

“It’s always good to hear from Elton. He’s a lovely guy and is very passionate about the music. He wants me to be huge all over the world, and I’m up for that too.”

‘A Team’ singer Ed is very driven when it comes to his career, and didn’t even stop for long over Christmas, instead opting to fly to the US to record tracks with a top rapper.

He added: “I got home for Christmas and it was lovely to see my friends and family. Then I got the email from this rapper so I went. I get restless when I’m not creating.

“I’m 20 and have a lot of steam to burn off so I keep going. I don’t have much time for a love life though. I had a relationship from school but I realised that didn’t work and that I’d have to be married to my job for a few years.”

Ed is nominated for Best Male Solo Act and Best Breakthrough Act at the BRITs, while his debut album, ‘+’, is up for Mastercard British Album of the Year and his single ‘A Team’ is one of the nominees for Best British Single. The awards will take place on February 21 at The O2 venue in London.