Coldplay have narrowed their next album down to 15 songs and according to singer Chris Martin are ''trying some risky things'' with them. 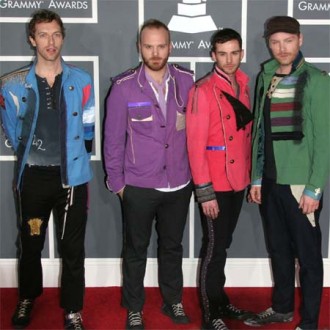 Coldplay have narrowed their next album down to 15 songs and are trying “risky things” with them.

‘The Scientist’ rockers have narrowed the potential tracks for their fifth album down, but lead singer Chris Martin has imposed some strange rules on himself for how he plans to name them.

He told Q Magazine: “We’re down to 15.I’m trying to make sure there are three songs that start with the same letter. On the last album it was ‘L’. It might be ‘U’ this time.

“One of them is ‘Up With The Birds’. It might be a duet, but we don’t know who with yet. The other two might change.”

Aside from song titles beginning with the letter U, Chris revealed there are tracks slated for inclusion on the album including ‘Hurts Like Heaven’ and ‘Every Teardrop Is A Waterfall’, which will likely be the album closer.

Describing the sound, Chris added that guitarist Jonny Buckland is coming into his own.

He said: “‘Hurts Like Heaven’ is all Jonny. It only has two chords. The songs are group-y, its guitar-y. Johnny is coming out of his cocoon. We’re just trying some risky things.”

The singer is keen for the group to push themselves, as he feels they’re battling against time to complete their best work.

He added: “We’re hungry and very fired up. In five years we’ll be in our late 30s. You have to have your best work done my then.”

Coldplay also announced this morning (25.11.10) they will release a festive track, ‘Christmas Lights’, on December 1.