Dave 1, one half of Canada’s princes of cheeky pop, Chromeo, talks to ELLE Canada about making a fourth album, dueting with Solange and jealousy. 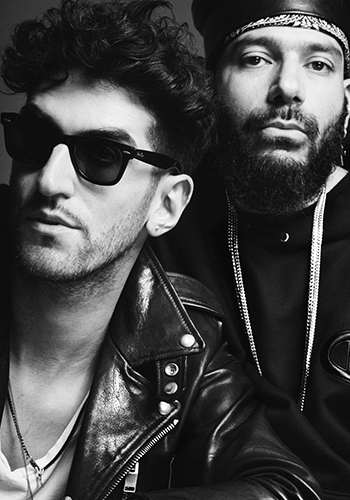 For shiny, synthy pop connoisseurs (or anyone unable to resist an appallingly catchy hook), a new Chromeo album is very good news. White Women, the Canadian band’s fourth release, (more on that album title later), is out this week. We chatted with Dave 1, one half of the Montreal-bred duo, for a surprisingly philosophical, peek at the making of the record.

What the ELLE editors are listening to right now

We need to talk about the album title. A fairly controversial choice, right?

“It’s the title of Helmut Newton’s first book. I was at the retrospective of his work in Paris, and they had all his books of photos and the titles were amazing. There’s another one called World Without Men which we probably should have chosen. We explain White Women and we take it out of context. It’s a bit of a challenge, but it’s a cool pretext for us to talk about anything from photography to gender and racial politics. So we thought about it, and we thought, ‘let’s run with it.’”

You and your bandmate, P-Thugg, are both from Montreal. Is being Canadian something you feel strongly about it?

“Not at all. I don’t even know what Canadian is. Canadian specificity beyond a funny accent and ketchup chips—you’re not going to get a lot out of me. Tim Hortons is cool.”

It took you two years to make this album. Anything new and different for fans?

“It’s a little bit poppier, it’s a little bit happier, it’s got a bit more shimmer to it. That’s why we took two years to do this—we wanted to challenge ourselves, spend more time writing and put out a record that feels exciting, which is something very rare when you’re on album number four. People are excited about a new band, or a comeback album from someone who’s been gone for ten years, but album number four is usually not really the peak of your career. We actually tried to make that.”

The ELLE guide to male grooming

There’s a duet, “Love On the Way Home” with Solange Knowles on the album. Tell me about that experience.

“We had worked with Solange on the last record, but she only did a chorus. In the meantime, she put out her own album and she became even more hugely successful as a solo artist so we were like we should do something where she’s way more involved. She’s immensely talented. She writes really fast. We had to schlep all the way to Long Island and sit with her somewhere until six in the morning while she finished recording, so that was a little gruelling, but well worth it.”

What’s the one track you think listeners need to hear on this album?

“‘Jealous,’ I think. It’s a great representation of where we’re at, in terms of the Chromeo 2.0 sound we wanted to get on this album—all our signature elements are still intact but you’ve got this kind of hi-octane, catchy popular feel to it, and at the same time the lyrics are still as funny and schmucky and quirky as ever, and it deals with an emotion that most people will never sing about in this way.”