Black Eyed Peas ''check out the scene'' in every city they visit to help inspire them and the sound of their next album. 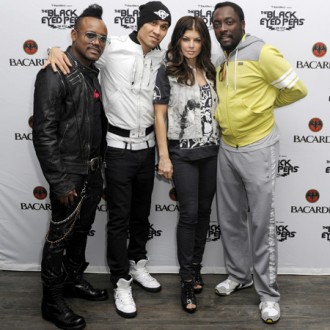 Black Eyed Peas “check out the scene” in every city they visit for inspiration.

‘The Time (Dirty Bit)’ group are about to release their latest album, ‘The Beginning’ – which was largely recorded while they were on tour across the world – and rapper Apl.de.ap said their travels have greatly influenced the record’s sound.

He said: “Going out, we try and check out the scene, the city and be inspired by other producers or other DJs, what kind of stuff they’re playing. So that’s how we keep fresh.”

His bandmate, Taboo – who also stars in the band along with producer and vocalist will.i.am and singer Fergie – added the band are keen to “stay hungry”, in order to retain their position as a top charting act.

Taboo added to MTV: “We have to stay hungry and keep wanting to push the envelope. Don’t be comfortable and settle. Will says once you start slacking off, there’s someone that’s hungrier than you.”

Will.i.am has previously talked about how ‘The Beginning’ was made on the road, meaning he sometimes had to improvise in order to hear some of the tracks he was making while recording them.

He said: “We had no speakers so I had to hijack the hotel television set and plug my computer into it. Some songs are 120 beats per minute and others are, like, 320.”