Billie Eilish Is Your Next Musical Obsession 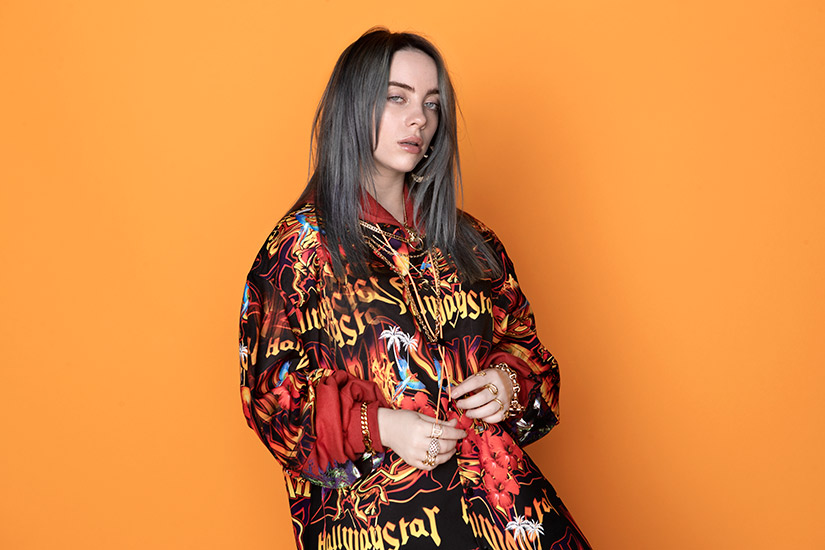 We almost feel guilty when we reach singer-songwriter Billie Eilish by phone from Los Angeles earlier this week. Why? “I’m in bed,” Eilish admits with a laugh, even though it’s around noon in her native L.A. on a Monday. “I’m sorry, I just woke up.” We can’t blame the 17-year-old though—it’s well documented that teens need more sleep. Though Eilish is hardly your typical teen. Her career was jumpstarted after her song “ocean eyes” (written by her brother Finneas O’Connell) went viral when she was just 13. Her star has been on the rise ever since, releasing track after track (including “lovely,” a collab with Khalid that appeared on the soundtrack for hit teen drama 13 Reasons Why) and amassing over 15 million Insta followers in the process.

Eilish’s music is haunting and often frightening (seriously, watch her “bury a friend” video with the lights on). It’s also genre-defying, with each song sounding completely different from the last, which may also explain why she’s found fans in passionate teens and an older music-obsessed crowd. Her debut LP When We All Fall Asleep, Where Do We Go? drops today—finally—after much anticipation. We caught up with the artist to talk music, her quick ascent into fame and why she likes being judged.

How are you feeling this close to the release date?

It’s so exciting. I’ve been working on this album longer than I can even imagine. I literally did not think I would ever finish it. It just felt like it would go on and on, so now having created a body of work that I’m very proud of and happy about is very satisfying and relieving and nerve-wracking.

How did all of this come about—were you one of those kids who grew up always wanting to be a musician?

Not at all. I’ve always loved music—it’s the biggest part of my life and has always underlined everything. I’d become interested in other things, but music was always there without [me] really realizing it. I started making it because I felt the need. I needed to get my brain onto a piece of paper and look at it instead of having it just be stuck in my head.

Where do you get your song ideas from?

Inspiration is literally everywhere you look. If you just open your eyes and ears and let yourself be inspired by things, it will happen in a second. Anything can inspire you to do crazy things like create something you never even thought about—even just a pattern on the floor. That’s how it works for me, at least.

What’s the most unexpected place you’ve gotten an idea then?

I don’t know if this is unexpected, but I get a lot of my ideas from dreams—for videos too. I have a lot of really intense dreams that are pretty messed up and the only way I can describe them is by writing about them. I like writing from other people’s points of view too.

You’ve said that you like being judged. Can you explain that?

[Laughs] I’ve always been a person that wanted to be seen—whether it’s about who I am, how I act, what I’m wearing, my talent, whatever. I’ve just always liked the feeling of eyes on me, like the rush of it. If I walk into a room and everyone looks up and half the people are thinking, “Wow, she looks sick as hell,” and the other half are thinking, “Ew, she looks f***ing dumb,” that still means everyone is thinking about me, so I’m good. I don’t care if it’s a positive or negative thought. If I’m in your brain, I’m taking over your thoughts.

Obviously so much has happened since “ocean eyes” first became a hit. What’s the most important thing you’ve learned throughout it all?

Probably just to remember not to let it all happen without you realizing. That’s a big thing that’s hard not do do—all I’m trying to do is get through everything, like, “Let’s survive this,” or “Let’s finish this part,” instead of really being there. Then when you’re sitting and it’s over, you’re like, “What the hell just happened?”

You’ve talked a lot about how you’ve struggled with the intense fame and constant attention. Do you ever wish your music career had started a little bit later to give you time to get through your teenage years?

I don’t even know. I never thought this is what my life would be now. When you’re a little kid, everyone’s like, “Yeah, I want to be famous.” I didn’t want to, but I wanted to be known or appreciated for something. I wanted to be seen and heard for the things I thought I was good at. But fame isn’t really what you think it is, and everything around it is kind of gross. It’s really weird.

And there’s literally no way to prepare for it.

No, not at all, oh my god. There’s also no right way to do it. Nobody’s mastered fame—you can’t.

How would you describe your sense of style?

I don’t know—I’ve never really known. I’ve always loved clothes and fashion and getting random shirts and cutting them up and making them into another shirt. I always want to wear something you can’t go out and buy.

Do you have any brands or items you’re obsessed with at the moment?

Growing up, I never really shopped, except for at Salvation Army or Goodwill, because I couldn’t afford to go anywhere else. It’s weird now getting clothes I could have never afforded when I was younger. I wear anything I’m interested in. There are a lot of really dope brands right now. Skoot is really sick and does all these weird custom pieces you’d never expect. Dude, there’s so many underground-ish brands that are coming up through Instagram.

What’s one thing you always need to have with you on tour?

I need Aquaphor. It’s an ointment that’s good for when you get new tattoos, but I just use it on my lips. I have a whole thing about having very nicely treated lips. I cannot even have a wisp of chapped lips—literally I just can’t take it.