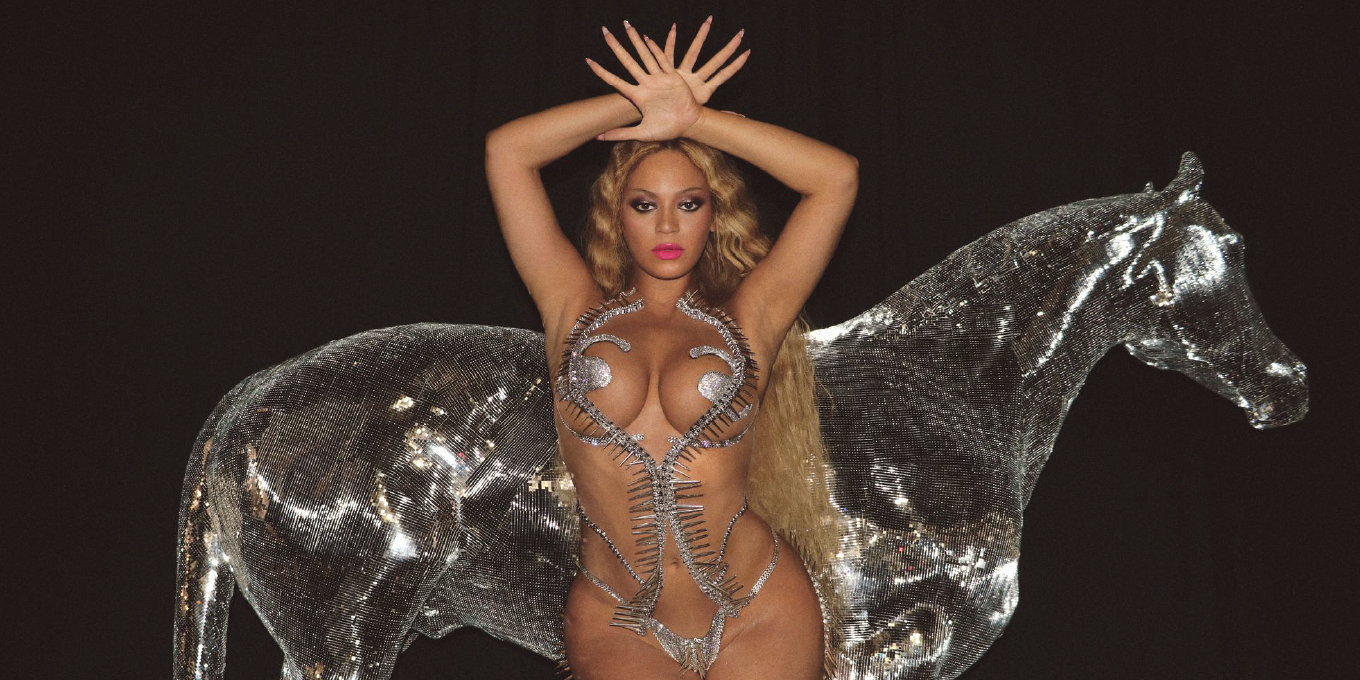 Beyoncé’s insatiable appetite for understanding Black music history and its copious, traditionally overlooked impact widens with every release. She’s both a student and master of the craft. Her pivotal album I Am…Sasha Fierce made her a transcendent force with a collection of pop hits and soul-baring ballads that took a page out of the Whitney Houston and Mariah Carey book of vocal regalia. On 2011’s 4, Beyoncé aced exercises of combining the retro flair of 1980s R&B with the lovey-dovey tracks of the ’90s, the genre’s golden age. Lemonade relied on Black southern and religious iconography to fuel a lush display of genre-bending music that became her most political work. The Gift, inspired by 2019’s remake of The Lion King, found the singer taking a backseat to uplift the foundation of Afrobeats and the most in-demand artists that are defining its sound. Throughout her career, Beyoncé has promoted the sounds of Black people in this country and beyond. Renaissance, the Houston-bred icon’s latest behemoth, furthers that lineage by honouring the dance music pioneered by Black women and Black queer people while subverting the burden of gentility that far too often plagues Black women superstars. She sounds freer than ever.

A significant component of Beyoncé’s larger-than-life persona and universal adoration, especially by straight Black women, is that she reached pop music dominance without succumbing to the pressures of fame. For over two decades, she’s become synonymous with how society frames a flawless Black woman, providing a dream for other Black women to harp on and live vicariously through. Though she’s both disrupted and redefined the music industry’s rules, she still always followed the rules in her personal life. She did what was expected of her: Beyoncé Giselle Knowles-Carter emerged via a God-fearing, middle class Black family from the South. With the help of her father’s business acumen, she catapulted her childhood vocal talent into girl-group success and eventual superstardom. She’s been romantically linked to only one person—an equally famous superstar whom she’d eventually marry. Then she had their children. Beyoncé has embodied personal and professional excellence while maintaining a cookie-cutter image.

“Throughout her career, Beyoncé has promoted the sounds of Black people in this country and beyond.”

In a 2021 Harper’s BAZAAR interview, she talks about producing this sterilized version of herself at a young age: “I was the most careful, professional teenager and I grew up fast. I wanted to break all of the stereotypes of the Black superstar, whether falling victim to drugs or alcohol or the absurd misconception that Black women were angry.” It’s likely that a young Beyoncé saw what happened to her forebears (Tina Turner, Whitney Houston, Janet Jackson) when they operated outside of the strict boundaries of what Black women superstars could be. But later in the same article, the multi-hyphenate expresses her desire to no longer cede to society’s expectations: “I have paid my dues and followed every rule for decades, so now I can break the rules that need to be broken. My wish for the future is to continue to do everything everyone thinks I can’t do.” Renaissance is Beyoncé’s sonically grand foray into asserting that power. 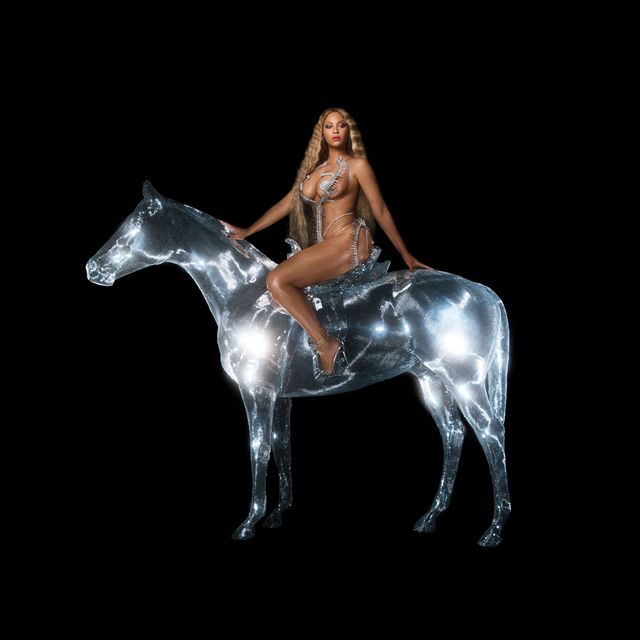 Beyoncé heavily explores subgenres of dance music and its roots across the album’s 16 tracks. “Alien Superstar,” the Right Said Fred-sampling track backed by monstrous, techno synths that sound like you’re entering an intergalactic atmosphere, is an ode to ballroom culture. Beyoncé alternates between first and second person to empower listeners with the same confidence in themselves as she does for herself (“Unique/That’s what you are/Stilеttos kicking vintage crystal off the bar/Category: bad bitch, I’m thе bar,” she exalts). The dancehall-tinged “Energy,” featuring Jamaican rapper BEAM, shines for its hard-hitting bars about enjoying the fruits of your labor and a supple transition to “Break My Soul” that’ll make any DJ envious. (The track is also the most controversial as it features a Kelis sample that the cultural innovator admitted she didn’t approve of—a glaring misstep from Beyoncé and her team.) “Cozy,” produced by Chicago-born DJ Honey Dijon, is a groovy house track on which Beyoncé reminds Black people of their inner power.

The song pairs well with a snippet of a Ts Madison video, “Bitch, I’m Black” which evokes the same message underlined in “Cozy”—being Black is absolutely, positively something to be proud about. But in the original 12-minute-long video, the Miami native and television personality admits that even though she’s happy to be Black, being Black and trans isn’t often met with warmth. Madison’s frustration with not being accepted for who she is punctuates “Cozy”’s thesis: Black queer people are deserving of immense love, care, and support. It’s one of Renaissance’s many themes. Beyoncé dedicated the album to her late godmother Uncle Jonny, who helped shape her formative years and introduced her to the music that inspired the album before dying of complications from HIV. As the singer delves deeper into her quest of dance music, she brings the artists who developed its sound and scene along with her. Renaissance boasts features, samples, and production from Big Freedia, Moi Renee, Kevin Aviance, Honey Dijon, and more. On Renaissance, Black queer people can feel seen and accepted.

Renaissance’s strength doesn’t solely reside in its exploration of dance music but its embrace of the genre’s liberatory ethos. Beyoncé’s smoldering, expansive vocal stylings invoke that emancipation. “Church Girl” is a triumphant bounce-infused single that features the singer toying with playful jargon (“drop it like a thotty,” “tig ol’bitties”) while calling on the saints and sinners to “shake that ass” over a blurry vocal loop from The Clark Sisters. It’s a sample of the Detroit gospel giants’ “Center of Thy Will” from their seminal 1981 album You Brought the Sunshine, which shows off the group’s innovative vocal runs and intricate harmonies. Beyoncé imitates the practice with soulful vocal stacking at the beginning of the track before the song swiftly shifts to a twerk anthem, eliminating the binary of holy and secular. The down-tempo “Heated” ends with a ballroom-influenced outro where she employs onomatopoeia, shouts, and taunting lines to express both fury and sass (“Uncle Jonny made my dress/That cheap Spandex/She looks a mess”). It’s a messy but thrilling part of the song where the greatest living entertainer is fully subsumed by the exhilarating spirit of the club (The song received backlash for its ableist lyrics, but Beyoncé agreed to change them.)

Beyoncé’s dazzling vocal performance reaches a peak on “Virgo’s Groove.” Throughout the six-minute ethereal funk jam, her voice floats so perfectly as if she’s actually skating on the dance floor. Her effortless ability to rise to crescendo anchors the track. The Syd-produced “Plastic Off the Sofa” is a sultry disco-funk number that ends with piercing ad libs, showcasing the depths of Beyoncé’s masterful vocal range. 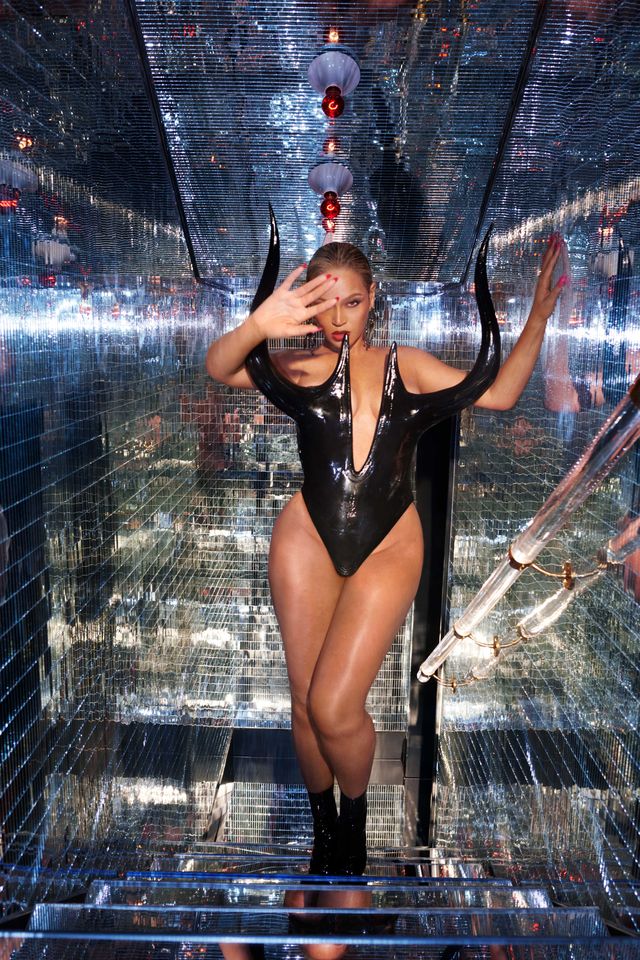 The least interesting moment of the album arrives at “Cuff It.” The breezy groove, laced in ‘80s pop bass lines, doesn’t build on the strength of its notable collaborators—Chic’s Nile Rodgers on guitar, and Sheila E on percussion. Their brilliant instrumentation is secluded in the background instead of punctuated in the song’s core. Elsewhere, the distinctive, cherished voices of Jamaican polymath Grace Jones and budding Afrobeats crooner Tems are reduced to fuzzy verses on the audacious “Move” that almost sound unrecognizable. But, without those songs, the too-smooth-to-be-true sequencing on Renaissance would be tainted. And on an album created on the tenet of imperfection, blunders can happen. Still, the fun tracks fit into the album’s narrative arc of letting go and feeling free.

Renaissance ends gracefully with “Summer Renaissance.” One of the longer tracks on the album, the song is Beyoncé’s glorious spin on Donna Summer’s consummate 1977 hit “I Feel Love.” She not only mirrors the classic vocal arrangement on the chorus from the original, but also ends the song with a searing, gospel-infused call-and-response session that underlines Beyoncé’s formative musical training in the Black church. “Summer Renaissance” isn’t the first time she’s interpolated a track from the Queen of Disco. On 2003’s “Naughty Girl,” she also mimicked the same vocal patterns of “Love to Love You Baby” while embodying its sensual flair. Beyoncé wasn’t born yet when the original was released in 1975 and was only 21 when she sampled it, but she approached the song with such authority that her sampling is still considered one of the sexiest jams in her catalogue.

“The album celebrates and preserves the forgotten history and contributions of the salient voices that have been reserved to the background.”

Both of the original recordings, along with several other songs, cemented Donna Summer’s legacy as not just the doyenne of the disco floor, but a pioneering figure in the history of popular music. However, the future of disco—a genre whose leading faces were Black artists—was altered when angry white rock fans rioted against its popularity in 1979. Though disco didn’t see the same commercial success again, it never died. It just re-emerged in underground ballroom scenes and as house music. Herein lies the beauty of Renaissance. The album celebrates and preserves the forgotten history and contributions of the salient voices that have been reserved to the background. On Renaissance, they’re the main characters. They are the moment. And by embracing that free spirit, Beyoncé welcomes her own emancipation and understands that she, too, will always be the moment.