Beyonce Knowles and Jay-Z could be the first artists to record a music video in space. 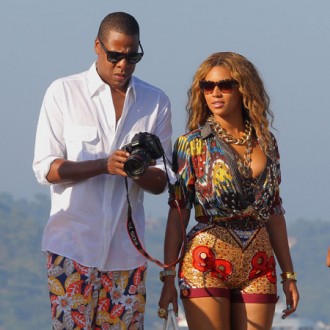 Beyonce Knowles and Jay-Z could record a music video in space.

Music executives have reportedly been discussing the possibility of filming on one of Sir Richard Branson’s Virgin Galactic spaceships – due to launch later this year – and the couple are seen as the perfect choice to set a global first.

The video would be shot at the time when the crafts – which seat six people and blast 70,000ft into the earth’s atmosphere – reach a point that allows passengers six minutes of weightlessness.

A source told The Sun newspaper: “The label people have been talking about making a music video in space.

“Beyonce and Jay-Z seemed the obvious option. Everything is being done to make it happen.”

A number of celebrities – believed to include dance artist Moby, ‘Star Trek’ star William Shatner and ‘Alien’ actress Sigourney Weaver – are rumoured to have bought tickets for Virgin Galactic.

However, one star who won’t be going into space is Salma Hayek, who has admitted to buying a ticket but later decided the expedition would be “inappropriate” because she is a mother.

She previously said: “I reserved my place with the Virgin Galactic expedition. And then I got pregnant. And now I’m a mother. So, I’m not going to go.”

Virgin Galactic have previously turned down a request from a film company to film sex scenes in zero gravity.