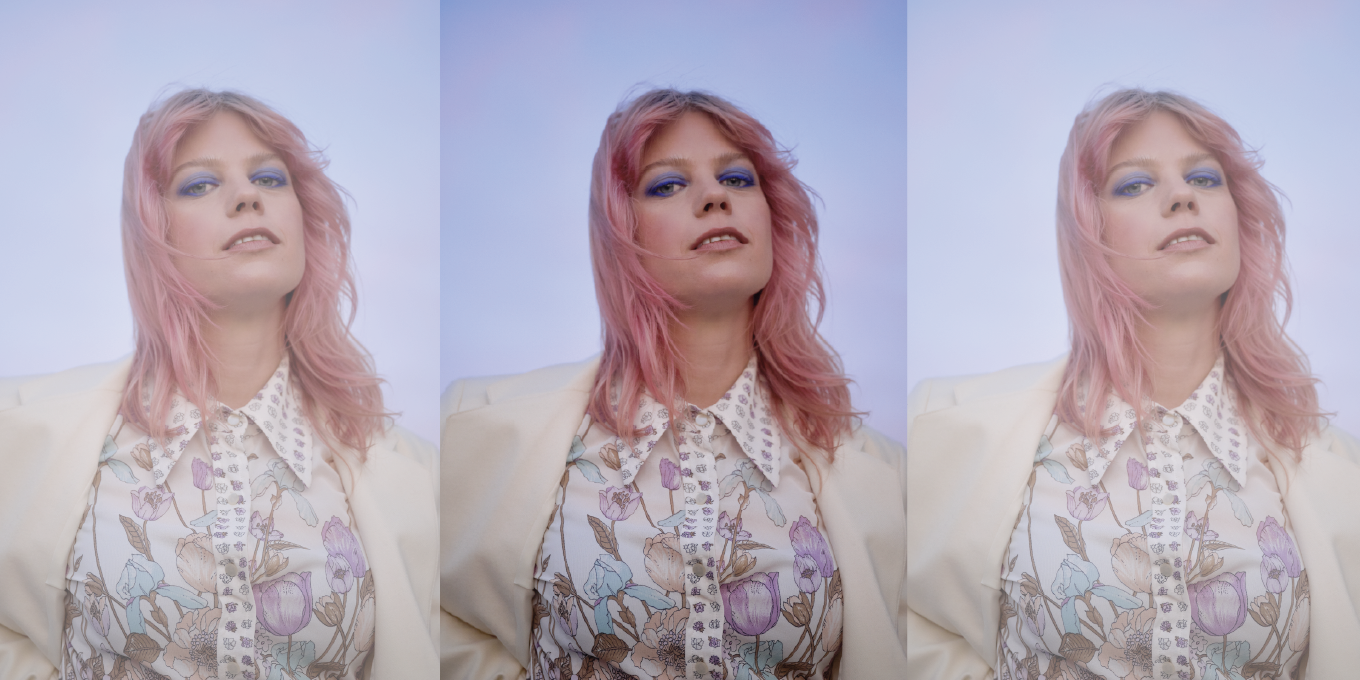 Basia Bulat’s voice is different. You hear it right away on “The Garden,” the opening title track for her forthcoming album which breathes new life into songs across her entire body of work to string quartet arrangements. Her distinct power is still there, the same that carries the raw emotion of the original 2016 version that appears on the Polaris Prize-shortlisted Good Advice, but her delivery is lighter—carefree, almost. She seems to float in the air, whirling around violin and cello that sound like they’re blooming.

Bulat’s voice is different on all 16 tracks on The Garden. She’s different. Recorded in Montreal where she lives, the album is an exercise in self-reflection, an exploration of the realization that the songs Bulat wrote over the past 15 years have changed meaning, changed shape, grown new shoots for her now. Strings help illuminate this journey, lighting the way through a vast and rich sonic landscape. These arrangements have always had a presence in Bulat’s work—a prolific multi-instrumentalist, she’s known for playing autoharp on her records—and she performs live with quartets and orchestras, but they’ve never taken centre stage before. For The Garden, produced by herself and Mark Lawson (Arcade Fire), Bulat handpicked collaborators and friends Owen Pallett, Paul Frith and Zou Zou Robidoux to arrange the compositions. She trusts their instincts completely, Bulat says, speaking from her home, “and it was very freeing to say, okay, whichever one you want to transcribe almost identically or play with and turn upside down, let’s go for it. I feel like that’s the fun part of reinterpretation. I know it’s still going to sound like me and I know that I’m going to be able to bring myself through whatever ends up happening.”

There’s Pallett’s “I Was a Daughter,” on which Bulat plays the celesta, that moves from darkness into sweet light filtered through a new lens now that Bulat is a mother too. Robidoux’s “Are You in Love?” that takes the soft rock of the 2020 original by the hand and leads it towards the innocence of a 1950’s prom. Firth’s “Infamous,” featuring backing vocals from The Weather Station, that softens the sharp edge of a breakup with an aching openness. And then, of course, there’s Pallett’s “The Garden.” “On the original recording, it was almost like paradise lost,” Bulat says. “For this new recording, it becomes paradise found.”

The Garden is out February 25, 2022. Ahead of the release, Bulat spoke with us about time and perspective, the creative and emotional process of working with string arrangements, and what certain lyrics mean to her now.

How did the project start? Was there a distinct moment when you realized a lot of the songs you’d written had shifted meaning for you?

I was promoting a record that came out in March 2020 called Are You in Love? and I was touring with a string quartet, so I had some arrangements of songs from previous performances I had done with philharmonic orchestras reduced for a quartet. And we were having so much fun with it until, like, the whole world stopped. Then when I found out I was pregnant, time still had no meaning and everything was changing and I just thought now would be a fun time to go through some of those songs that do feel really different, that we have some arrangements for, and just see what happens. I thought maybe we’d only end up liking a few of them. I was very, very happy, super pleased that all of them turned out really well.

It makes me think about Joni Mitchell with “Both Sides, Now,” how she wrote it in her early twenties and then recorded it again at 56 when she could really reflect on life from both sides.

Yeah, I mean, that song, ugh. And the later version I adore. I actually think I might prefer it. It’s a really cool impulse that you don’t know until you get there. And then I realized, actually, this is a very natural and interesting creative impulse. Yeah, Joni I love. In poetry, there’s some famous instances: Walt Whitman’s Leaves of Grass. There’s a lot of country songwriters that I love, like Dolly [Parton] or Willie Nelson, that release multiple versions of songs again in different ways. And I think that’s one of the gifts of being a musician, and maybe that’s why I love having “The Garden” become the title track—it was one of those songs that changed meaning for me, realizing what I do is a lot like gardening. We tend to see these cycles of rebirth and these new variations of these plants that come back every year in a different form. Some years they’ll be really strong—you know, when people say, oh, the roses were really good this year. You never know how they’re going to turn out. You have a bit of your own impact as a gardener, nurturing everything, but you also have to let go of control.

That’s something I wanted to talk to you about as well, actually—gardens as a metaphor for the seasons of life, how you have to be patient and sort of surrender to the ever-changing nature of it all.

Yeah, and that’s something that I really struggled with when I was younger, was that feeling of letting go or surrendering. And it felt so much more liberating this time around, being a part of a process. As much as I want to say ‘I’m a songwriter, these are my songs,’ I’m a little speck in the universe. I get to be a little radio receiver, picking up these songs as a frequency somehow and channeling them through and having that freedom, like, okay, what kind of flowers come up if we pollinate it this way, without forcing which way the wind is going to blow? And realizing each season, even when something seems quiet in wintertime, there’s still so much life happening every day. I didn’t used to take as much advantage of those quiet moments that I really appreciate now.

How has time offered a different perspective to your songs? Especially ones like “I Was a Daughter,” which was on your 2007 debut, Oh My Darling?

That song is so special to me. When I wrote Oh My Darling, I really was making a document of a moment in time. And I was trying to write songs that felt like an audible memory. I had a very, I would say, complex childhood, because my father was someone who had a lot of problems and really struggled with a lot of things, and it had a very negative impact on our childhood, my brother and I, in our family life. And my mom did everything to try and make things as normal and as peaceful and fun as possible as she could for us, despite all that—and really doing it on her own. And she had me when she was very young, she was basically still a kid. So, I wrote the song kind of joyfully thanking her for that. And to sing that now with all these different emotions, I really have a different appreciation of everything she went through to give me the life that I had and that I have. And to have my own little girl, it definitely feels like a very psychedelic and surreal thing.

“I Was a Daughter” feels like one of the greatest musical departures, too. It’s beautifully evocative and feels like it moves through darkness into light.

Thank you. I love that arrangement so much. I feel like a lot of these songs, and that one in particular, I sing a lot better now. I definitely empathize with Joni—I know the feeling of, like, I could definitely sing this better now than I could at the start!

You have always played with string accompaniments, but this is your first all-strings album. What really resonates, emotionally, about those kinds of arrangements for you?

It really comes from when I was in school in music programs. I wanted to play in every ensemble I possibly could. I just loved music. And I ended up sneaking my way into a chamber ensemble as the bass player—upright bass—and there’s a piece called Béla Bartók’s Romanian Folk Dances that was the first time that I really felt… I really fell in love with this piece, and I felt my heritage, coming from Eastern Europe, being celebrated in the moment. My background’s from Poland—I’m born in Toronto—but those melodies and those rhythms felt very familiar to me, probably because I heard them so much from my mom and my grandmother. And I guess it’s just trying to get that feeling back a little bit that I had when I was younger, when I was a kid, learning to play these pieces for the first time.

“The Garden” has this beautiful line: ‘We won’t look back, and if we don’t, we won’t be lost.’ What does that mean to you now?

It’s interesting, because it is looking back, but it’s also looking at the present. I think that’s what I love about the idea of the reprise. When I wrote it, it was almost like a meditation to myself in a time of heartbreak or a serious breakdown where I just kept saying to myself, as long as I stay in the moment or look ahead of me and I don’t spend too much time looking back, I’m going to find my way to where I’m going. And now, singing that meditation to myself, I realize how much it had become a breakthrough. And I couldn’t have known it at the time. So, I hope it becomes a reminder. It’s kind of a mantra of, like, remember everything you went through and where you were in that moment, and now there’s even more to come.

In that sense, I love how the album ends with “Good Advice.” Why did you choose to have that as the last track?

It has to come from yourself. The chorus is like, Your good advice, I didn’t ask and I didn’t want it, because it can’t come from the outside. And I get a lot of really good advice from girlfriends, but I have to ask for it. And sometimes when you’re asking for it you already know the answer and your friends are kind of already pointing out the truth that you don’t really want to accept. At least for me, that’s my story. And that’s what I love about going out into nature or being really present in the moment—that’s when the answers usually come to me, when I’m really quiet and present with myself. That moment at the end of the record is another reminder that it’s always going to come from within.

This interview has been condensed and edited for clarity.