Awkwafina can't wait to host the iHeartRadio MMVAs this weekend

The actress, rapper and this year's breakout star is set to host the 2018 iHeartRadio MMVAs in Toronto on August 26. 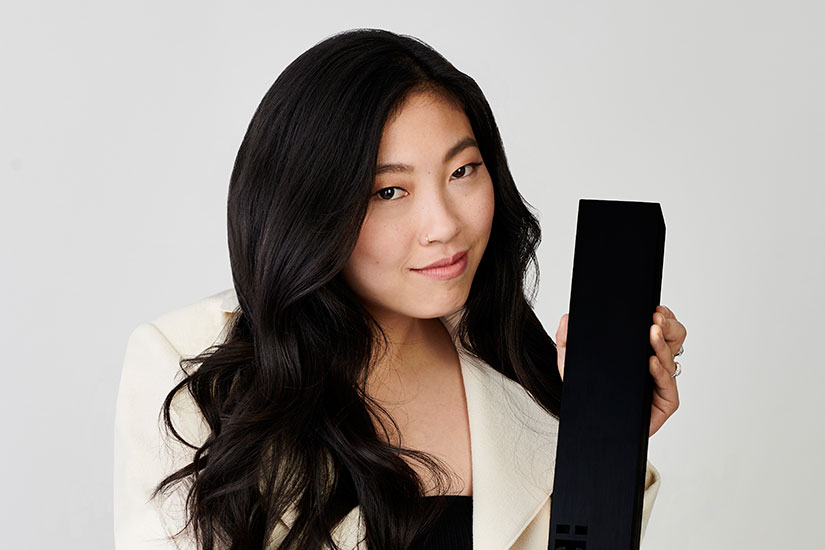 Awkwafina can do it all.

This year alone, she’s been in two major blockbusters (Ocean’s 8 and Crazy Rich Asians), released her hip-hop EP, In Fina We Trust, and recently wrapped up filming two more movies, one of which in her first leading role.

Now, the rapper, actress and writer—born Nora Lum—will take on the role as host of the 2018 iHeartRadio MMVAs in Toronto this coming Sunday (August 26). The Canadian awards show, which celebrates the year’s top music videos and artists, feels more like the city’s biggest summer block party. (They literally shut down the street to bring fans close to performances from favourites like Shawn Mendes, Alessia Cara, The Beaches and more.)

And although Awkwafina is no stranger to the stage — she’s been performing since she was in high school — she admits she still gets nervous, but those jitters can be a good thing. “I’ve learned as a performer that the stage fright and nervousness — that’s adrenaline and it completely drives you to be that much more crazy and excited,” she says. “I really want to have a good night and I plan on doing some crazy stuff so it’s going to be fun.”

We caught up with Awkwafina to talk about who she’s excited to see perform, the importance of pursuing what you love and the perfect pair of sneakers.

How do you feel about hosting the 2018 iHeartRadio MMVAs? “I’m so excited. I love Toronto. When I came through for the release of Crazy Rich Asians, I noticed that the city seemed so alive. It’s incredibly diverse and the food is amazing. I was able to see the stage [setup], and I really like that it’s like an outdoor show because I feel like you need to run off the energy of fans to really get that hype.”

How do you feel about the response to Crazy Rich Asians? “It’s really a game-changer in my career. It’s something that I’m so honoured to be part of. When I look back on what Awkwafina was and who she is in the movie, that connection is pretty emotional for me, for someone that’s been in the movie as an actress and also as an Asian-American who was looking for a movie like that growing up.”

The movie has brought up a lot of conversation about representation — what does this mean to you? “Very often, minorities will take underrepresentation as kind of a sign from the universe and from society that they aren’t allowed or that it’s not possible to pursue what they love doing. I think that everything, first of all, is possible. Second of all, it’s very important that you do it because for me, it took one. It took seeing Margaret Cho once for me to understand that maybe this is possible. It’s not a matter of us catching up. It’s a matter of the world catching up to us.”

Switching gears a bit, how would you describe your style, both on and off the red carpet? “Target is amazing — I shop there usually when I’m normal. When I go to those red carpets, I’ve been in some looks that probably cost more than my apartment so that’s awesome. I’ve worn Reema Acra to both Ocean’s 8 and Crazy Rich Asians premieres and what they’re doing is amazing. My personal style is pretty much Target pants and a white T-shirt. I wish I could be more fashionable but I know my stylist Avo Yermagyan won’t let me down.”

What’s the must-have item in your closet? “It’s always important to have a sneaker that can be both posh and casual — something you can go to the deli in but that you can also dress up.”

What’s your go-to beauty routine? “Always bring some eye strips with you when you’re travelling a lot because they’ll take away the circles. I love the skyn ICELAND under-eye gel patches. I also love Joanna Vargas skincare products. You’ve got to take care of your skin.”

What’s next for you? “I just came off of two movies that I shot abroad. One is called Paradise Hills with Emma Roberts. We shot it in Spain. Right after that, I did my first leading role ever that shot in China. It was written and directed by Lulu Wang, an Asian-American director. My album came out in June and I shot my pilot for Comedy Central so I’m going to take a little break. It’s been a really busy year.”