Ash have their ''eyes peeled'' for a new guitarist to replace Bloc Party's Russell Lissack, who has been standing in for them. 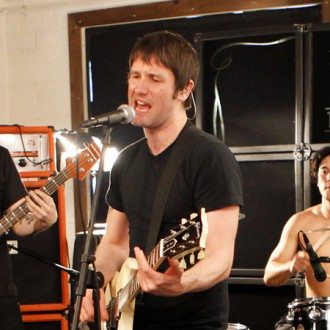 Ash have their “eyes peeled” for a new guitarist.

The ‘Girl From Mars’ rockers will soon lose their second guitar player, Russell Lissack, when he rejoins his main band, Bloc Party, and frontman Tim Wheeler says he’s on the lookout for someone new.

He told BANG Showbiz: “We’ll have Russell until the summer – we’ll have him for the festivals hopefully – then I guess we’ll have to start thinking what to do next, but I really do enjoy having the second guitarist. We’ll have our eyes peeled.”

Tim – who is joined in the band by drummer Rick McMurray and bass player Mark Hamilton – added anyone hoping for the role in the hard partying band will have big shoes to fill, both on and offstage.

He said: “Russell was absolutely perfect he can really play and he’s such an easygoing guy, he’s brilliant.

“You think he’s a retiring guy, but he was also one of the most crazy, he’s got some great stories. The thing about him is he’s quiet, but it’s the quiet ones you have to watch. He’s got some brilliant stories.”

Ash started as a three piece before adding second guitarist Charlotte Hatherley in 1997, although she left in 2006 to pursue a solo career.

Tim will perform a special set covering sings by US band Pixies as part of The JD Set, sponsored by Jack Daniel’s whiskey, at London’s XOYO club in London this Thursday (24.03.11). For more information please visit www.thejdset.co.uk.