Arctic Monkeys thought of obscure names for their fourth album while recording in Los Angeles, including 'The Blondo-Sonic Rape Alarm' and 'The Thunder-Suckle Fuss Canyon'. 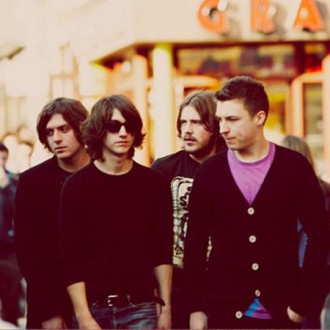 The ‘Cornerstone’ rockers said although people might think their final decision, ‘Suck it and See’, unusual, they would have been even more surprised by other names they considered, including ‘The Rain-Shaped Shimmer Trap’ and ‘The Thunder-Suckle Fuss Canyon’.

Singer and guitarist Alex Turner told NME magazine: “We were trying to think of album titles all the time when we were in Los Angeles, as a sort of exercise to try and stumble across something we thought we’d try and name something else and then steal that as our album title.

“So you know fuzz pedals for guitars? Hey usually have quite colourful names. So we were trying to think of fuzz pedal names in the hope it would lead us to an album title.”

However, despite the band – which also includes Jamie Cook, Nick O’Malley and Matt Helders – not using one their more obscure titles for the album, the potential names appear in its song lyrics.

Alex added: “We got a load of them like ‘The Thunder-Suckle Fuss Canyon’, which is a lyric that did finally get in there, on ‘Library Pictures’.

“It goes, ‘We’re going riding through the thunder-suckle fuss canyon’ and then does a countdown to lift-off.”