Arcade Fire have picked up the 2011 Polaris Music Prize for their third album 'The Suburbs', beating the likes of Destroyer, Hey Rosetta! and Colin Stetson to bag the coveted award. 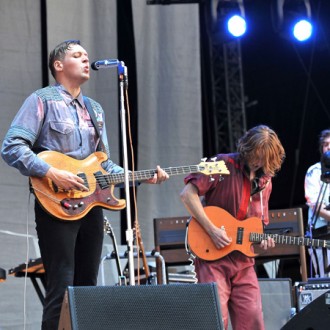 Arcade Fire have won the 2011 Polaris Music Prize for their third album ‘The Suburbs’.

The group beat off stiff competition from the likes of Destroyer, Hey Rosetta! and Colin Stetson to bag the coveted award, which recognises Canada’s best album of the last 12 months and is the equivalent of Britain’s Barclaycard Mercury Prize.

Taking home a $30,000 cheque from the ceremony in Toronto last night (19.09.11), drummer Jeremy Gara and multi-instrumentalist Richard Parry thanked the judging panel of industry experts for the honour.

Jeremy said: “Anyone who is under 18 and playing music and everyone who has ever been on stage and had the opportunity to play music and have someone hear it, just stick with it, because in 20 years you could be up here and have an album much better than this.”

Previous years have seen the likes of Caribou, F****d Up and Final Fantasy take home the accolade.