AC/DC have no limit on props 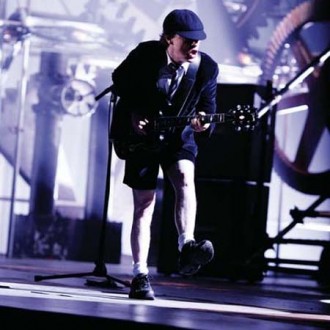 AC/DC have no limits when it comes to designing their elaborate stage props.

The ‘Back in Black’ rockers have had huge pieces built for their tours, including a giant inflatable woman, an on stage wrecking ball for their ‘Ballbreaker’ tour and, most recently, a huge derailed train to accompany the song ‘Rock ‘n’ Roll Train’ on their ‘Black Ice’ world tour from 2008 to 2010, and claim they never accept a limit to the size or scale of what they have onstage.

Singer Brian Johnson said: “This is rock and roll, there’s no such word as `no’. It was [guitarists] Malcolm and Angus [Young’s] idea about the train, initially just trying to think of a train, and just say to somebody `Right, we want a train’, and to convert that into the real thing.”

Angus added to Britain’s Absolute Radio DJ Ben Jones: “Yeah, I mean, you can dream what you want, but something’s got to be practical, because sometimes you can come up with great ideas and you put them into practice and you go `Oh s**t, that looks naff.’”

Brian added: “Yeah, but we did do it and it really was sensational, that train, and it never screwed up, it was always bang on.”

Despite being together for 38 years and having crossed the world many times with their shows, the group – which also includes Cliff Williams and Phil Rudd -never get bored of touring and playing live for people.

Brian added: “The travelling is tedious, you know, but the on stage bit, getting on the stage, that’s the fun bit, you know, that’s what you’re getting out for.

“I would welcome another tour, just to get out there. I mean, if they said, `Another two years’ I might blanch a bit, but I think everybody in the band is fit, well prepared, and they’ve still got it.”

The full interview with Brian and Angus can be seen at www.absoluteradio.co.uk.