The best tunes for your summertime playlists. 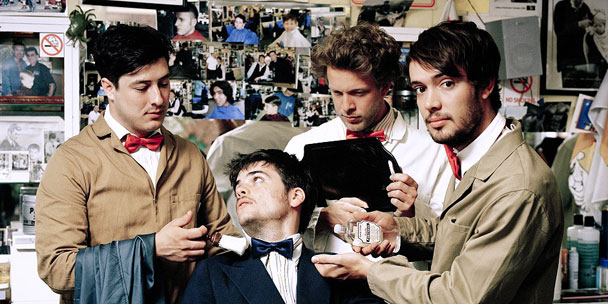 You may already have heard the jaunty folk-Celtic rock sounds of Mumford and Sons on your local new music radio station. The UK band’s hit single “Little Lion Man” is getting increasing airplay across the country and it’s about time. Already a well-known band back home and in Australia, Mumford and Sons make the kind of uniquely simple music that we sometimes crave. Sure, it’s great to listen to the complexity of Radiohead or the genius of Broken Social Scene from time to time, but Mumford and Sons provides easy listening without being annoying. You’ll hear all Celtic folk with their first single “Little Lion Man” while “Thistle and Weeds” brings the rock into the fold.

The band belongs to Marcus Mumford, Country Winston, Ben Lovett, and Ted Dwane. Mumford takes lead vocals and provides a raspy, almost weathered sound while Country, Ben and Ted provide layered harmonies on most tracks. Have a listen to “Dustbowl Dance” and you’ll have a perfect example of what I mean. Not to be dismissed is the band’s lyric writing abilities: “After the Storm”, the story of a man afraid of his past, ends the album triumphantly. While title track “Sigh No More” is a thoughtful ballad as they sing "Love it will not betray you, dismay or enslave you/It will set you free/Be more like the man you were made to be." All of this over quickly strum banjo.

As a woman, I can safely say that hearing a young man sing these words, with that music in the background brings one word to mind: sexy. There’s no doubt in my mind that these handsome 20-something’s don’t have a hard time with the ladies. The album came out in February but it may be your go-to summer album this season.

Self-proclaimed “noise-pop” vocalists Derek El Miller and Alexis Krauss meld soft melodies and hard electronic beats in their latest, Treats. Signed to M.I.A’s record label N.E.E.T Recordings, the catchiest songs by far are: “Rill Rill” and “Crown on the Ground.” Dig deeper into the offering and you will hit surprisingly heavier tunes like “A/B Machines” where Miller’s over-strung guitars and distorted bass lines explode behind Krauss, who manages to sound incredibly poised amidst the chaos.

The Drums and The New Pornographers on the next page…

The Drums: The Drums
Moshi Moshi

After releasing a critically acclaimed EP in 2009, The Drums have released an equally as impressive debut album on Moshe Moshi records. It’s no surprise that band co-founders and BFF’s Jonathan Pierce and Jacob Graham name The Smiths, Joy Division and The Shangri-la’s as influences; their sound definitely exhibits hint traces of each.

They also exhibit symptoms of that now-cliché American-band-that-sound-like-they’re-British (The Strokes suffer from it, too.) Fake accents aside, The Drums are still creative, clever and melodic, taking you from the bouncy “I’ll Never Drop my Sword” and “The Future” to dark Smiths-esque “We Tried.” If you’re getting married this summer, honestly consider the love song “Down By the Water”. It’s anthemic, sweet and original; unlike Celine, Shania or U2.

The New Pornographers: Together
Matador

As Canadians we have a lot to be proud of, even if we are too modest to admit it. Part of our national pride is our constant contribution to Indie rock. Look back to Neil Young (yes, he was once considered indie) to the meteoric rise of Arcade Fire and Metric. But, it doesn’t stop there. The New Pornographers have been at it since 1997 and they’re right on the cusp of mainstream fame, not that lead man A.C Newman is looking for it.

I had a chance to chat to him about their latest release Together and I asked him what his advice would be to a single lady looking to score a rock star. His response: “I don’t know. Does that mean I’m a rock star?” A charming humility, no doubt, but after listening to their latest effort, Together, one would think he most certainly is. Partially recorded at Newman’s Woodstock N.Y home he shares with his wife, Together features collaborations with Annie Clark (St. Vincent), Zach Condon (Beirut), Will Sheff (Okkervil River), and the Dap-Kings Horns, among other talents. Are the Pornographers riffing off Broken Social Scene in their spate of big collabs? “The story isn’t really all that interesting,” he says. “Will Sheff has been a good friend for a long time and it just seemed natural to have him sing with us. Same goes with Zach and Annie. It’s cool to have such talented friends.”

Together sees The New Pornographers making the kind of power pop that won hearts back in 2000 with Mass Romantic. Peppered with a smattering of strings, Newman says he wanted “cello’s played like guitars” which adds a certain whimsy to very singable music.

So what is A.C Newman listening to right now? “I’m getting into old vinyl again. Old garage stuff like The Prisoners and The Stingrays. And there are a lot of new bands that I love. I like Frightened Rabbit and I’ve really been getting into the Dirty Projectors. They’re one of those bands who I think are working on another level, it feels like their pushing music forward.”

Wale and Kate Nash on the next page…

Granted, this album came out last November, but my job is to introduce you to amazing tunes, so regardless of how “old” this album is, I promise you it will be on heavy rotation for you today. The band is Olubowale Victor Folarin a.k.a Wale (pronounced Wall-ay). Produced by high profile producer Mark Ronson (yep, the potential brother-in-law to Lindsay Lohan), Attention Deficit is one of those rare hip hop gems that only needs one listen to know that you’re into it.

Single “Chillin’” (feat. Lady Gaga) might be your favorite, boasting funky beats over classic Steam sample ‘Na, na, na, hey, hey, goodbye.’ Not far behind comes “T.V. in the Radio”, featuring Toronto’s own K’Naan and “Pretty Girls,” which brings in Weensey of D.C outfit Backyard Band. With an ode to the celebrity-obsessed young female in “90201” and a personal account of acceptance in “Shades”, Wale proves he’s a hip hop artist capable of rapping about subjects other than his ride and his girlfriends thick booty.

Maybe you’ve already heard his breakout hit with Lily Allen “Nike Boots” or you were privy to 2008’s Mixtape About Nothing. Expectations for this debut album were high, especially considering the heavyweight production team consisting of the Neptunes, Cool & Dre, 9th Wonder and TV on The Radio’s Dave Sitek.

Thankfully, Attention Deficit lives up to the hype and no one thinks so more than Wale himself. With a Kanye-in-training ego, this rapper has been known to boast of his abilities more than a pageant Mom boasts of her daughter’s baton twirling talents. He’s a few steps away from stealing the mic from Taylor Swift on Grammy night, but there’s no telling where this up and comer will end up, both musically and in celebrity. Whatever the future holds for Wale there’s no doubt that the journey will be entertaining.

Kate Nash: My Best Friend Is You
Fiction, Moshi Moshi

Kate Nash made it into ELLECanada.com’s September 2008 reviews with her debut album Made of Bricks. If I recall correctly I gushed about this young English chanteuse. Often times I cringe when I’ve gone over the top about a new artist as more often than not, the follow up is a real stinker. I’m happy to report that Nash’s follow up album My Best Friend is You is anything but cringe-worthy.

With her trademark London lilt and cutesy, honest lyrics, Nash doesn’t stray too much from what she did on Made of Bricks, but as it’s only her second album, we’re not quite sick of what she’s serving. After this one though, she might want to take a few more risks otherwise she may fall prey to the Coldplay syndrome: all-songs-sound-the same-itis. It’s a common disease but one that is generally avoidable with a little effort and creativity.

“Don’t You want To Share the Guilt” impresses with Nash interjecting spoken word about some of her memories and feelings. Backed by a myriad of strings and building drums it’s like a powerful diary entry Nash has given us permission to read. “Mansion Song” also incorporates spoken word with a crazy rant by Nash at the beginning of the track. Honestly? This one should have stayed on the editing room floor.

Her relationship with The Cribs’ Ryan Jarman may have contributed to the shape of this album, as there’s more heart than hurt on it. Do you think the album title has anything to do with him? Hmmmmm, curiously obvious. “Love you More” is fairly punk for Nash and “Do Wah Do” seems to be this albums “Foundations”.

It should also be noted that My Best Friend is You was produced by Bernard Butler, the same producer behind fellow English rose, Duffy. This album is definite evidence that Butler and Nash should remain teamed up in future efforts as it seems the pair are just scratching the surface. The future remains to be unseen but based on My Best Friend is You; it’s safe to assume that Kate Nash will continue to discover herself as an artist: the outcome promises to be riveting.