One-on-one with the star on Workin’ Moms season three. 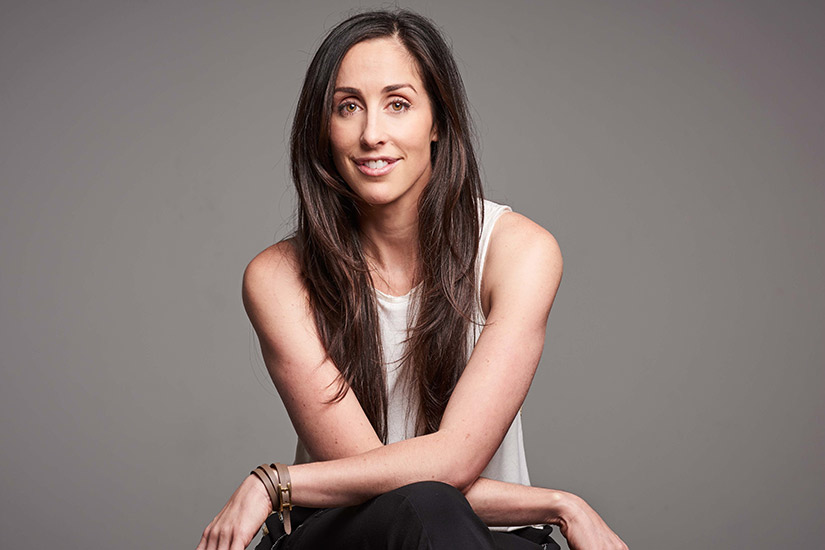 I’ve barely sat down across from Catherine Reitman, the creator and star—oh, and executive producer, writer and sometimes director—of CBC’s hit sitcom Workin’ Moms, when she comments on my nail polish. It’s an electric blue shade I opted for because we’re in the middle of a Canadian winter and it felt like I hadn’t seen the sun in literal days. Reitman understands my logic, but worries she’d quickly grow tired of a hue so vibrant. “Right now, I love lavender,” she says, wiggling her fingers. “It’s like what you’re saying with the dreariness outside. I look down and it makes me feel feminine and happy.”

We’ve met up to talk about season three of the 37-year-old’s comedy, premiering on CBC on Jan. 10, so it might seem weird to spend so much time discussing nail polish. But it’s not, really. Reitman (who’s also a mom to two boys) loves a good manicure, but she goes sans polish while filming the show, which is about, well, working mothers. This is partly because it’s easier for continuity, but there’s a bigger reason too: “It’s not the most relatable thing for working moms to have freshly painted claws all the time. There’s no way they can make their way to a manicurist [that often],” she says. “So I keep them bare as a statement.”

That’s Workin’ Moms in a nutshell: hilarious, but also so very on-the-nose about the non-stop lives of women who have 9-to-5s and have children to care for. Its third season finds a pregnant Kate (Reitman)—spoiler!—trying to rebuild her life after discovering her husband Nathan (Reitman’s IRL husband and co-executive producer Philip Sternberg)’s affair. We caught up with Reitman to talk about loving her job and being a working mom IRL.

After you have kids and you return to work, if you choose to, most people undergo a pretty severe identity crisis, because all of the sudden it’s nearly impossible to be the person you were in university. That was all really fresh grounds for us to explore in the first season, and then go deeper into the relationships in season two. Now, the identity crisis comes from Kate having to reinvent herself after learning her husband has been unfaithful. Unfortunately, it’s the new normal to get divorced—and divorced with children is its own soil rich with land mines. There’s a lot of comedy but a lot of heartache too.

How does it feel now that the show has such a great fan base behind it?

I don’t want to let them down. When people on the street stop me for [my roles on] Black-ish or It’s Always Sunny in Philadelphia, they’re like, “Oh my God, your character is so funny!” When people stop me to say they love Workin’ Moms, it’s not just that the show makes them laugh or is a great escape—they tell me my, or another, character’s story is their story. They connect to it in such a profound way that it’s created incredible pressure on me and the writers to make sure that each season we’re continuing not only to push the bar and tap into sometimes taboo and polarizing subject matter, but also speaking to it in a way that feels relatable so we don’t lose our audience.

You’ve talked a lot about the guilt that comes with being a working mom, and of course the show deals with that too. Has doing the series helped with that at all?

It hasn’t. It’s gotten worse. Look, I have a very good therapist, a very good job, I also have a very good set of children and a very good partner. I’m equipped with what most women don’t have, and I recognize that. Operating from a place of gratitude puts the whining and complaining in perspective pretty quickly. Not to say those complaints aren’t valid—we have to be able to bitch, it lets off steam. But the guilt doesn’t go way. If anything, as kids get older, it becomes a lot more complicated because they’re not just blobs who cry and smile when they see you.

It helps that you ultimately love your job.

And my kids witness that. I’ve tried to make it a priority that I talk about how much I love what I do so that they know when I leave them, though I feel guilty, I’m going to do something I love. And hopefully they’ll want to mimic that.

What are some of your working-mom essentials?

Exercise to keep my brain sharp—I can definitely operate at a higher level after. I go to SoulCycle and my husband just bought a Peloton bike. I’ve embraced comfortable, but still chic, footwear. I don’t know who I was wearing heels for—as much as I love the way they make my legs look and the power I feel when I choose to wear them—but I can do a longer and more pressing day if I’m in a shoe I can walk in. I wear a lot of high-top sneakers, Air Jordans, boots. Also water, water, water and less caffeine. I don’t crash as much and I sleep better. And I read from a Kindle a lot. It gives me a nice escape and I find it very stimulating.