Why this feminist loves to watch costume dramas 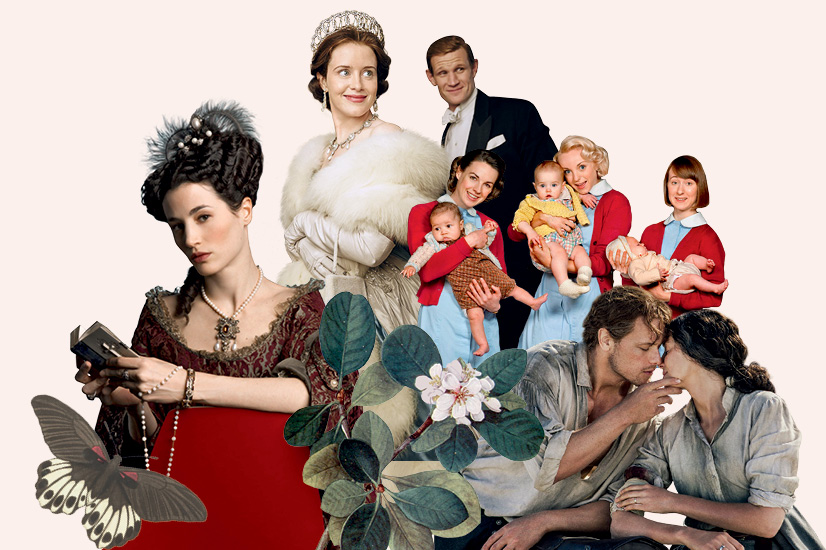 “Olden days again?” my seven-year-old sighs as he catches me curled up on the couch. “You were watching that yesterday.”

“This is totally different!” I protest. “That was 19th-century England. This is 17th-century France. Look at those dresses! How could you mistake this for working-class London?!”

Hello, my name is Leah, and I have a problem: I’m obsessed with costume dramas. If it takes place before the 1970s, I’ve watched it—nay, devoured it. Downton Abbey may have started a casual love affair with empire-waist gowns and white gloves for many, but I’ve been in way deeper and for way longer.

I remember raging furiously against the dying of the light (i.e., bedtime) when I was eight because I wasn’t able to catch the end of some movie-of-the-week about the Salem witch trials. I gobbled up North and South, a 1980s series set during the American Civil War. And, yes, I count myself among the legions of crazed Outlander fans who call the dark days between its seasons “Droughtlander.” Blessedly, that drought will be over next month with the start of season four. But I’m also counting the days (Too. Many. Days!) until the return of The Crown, Victoria and Call the Midwife, among others.

Do I need a life? Like, one that takes place in 2018? Why am I—and many other fair ladies of my acquaintance on the Internet—so fixated on these shows? To wit, dear readers, my theories.

And, oh, what men. Tom Hardy’s James Delaney is a glowering, grimy tower of sex on the London-set drama Taboo. Cillian Murphy shreds hearts with his gangsta acumen (plus, cheekbones!) as Tommy on Peaky Blinders, Matt Smith dashes about in sexy retro cars as the young Prince Philip in The Crown. They have accents and snappy vintage wardrobes, and they are Very. Bad. Boys. GET IN.

RELATED TO THE MEN: THE SEX

Now, I’m not a girl who needs a PBS-approved drama to watch a sex scene—that’s what Google is for. But it certainly doesn’t hurt that some of these historical dramas are famous for their titillating bits. Outlander in particular is known for this—many a meme has been made about Jamie’s O-face, but, personally, I rather enjoy it when time-travelling nurse Claire gets hers. When you watch a beautiful woman have what looks like a very convincing climax in the context of a loving relationship, you suddenly realize you’ve rarely seen that before on TV (or rarely seen it done well). And if you’re in the mood for some beautifully-art-directed, all-orientations debauchery, you should watch Versailles. Apparently there wasn’t much to keep the Sun King’s bored nobles oc­cupied other than a lot of naughty, naughty French things, with a splash of macarons and murder on the side.

Let’s be real: We come for the drama, but we stay for the dresses and the decor. Would The Crown be half as delicious without the hundreds of note-perfect historical costumes? The Marvelous Mrs. Maisel, about a 1950s housewife who goes into stand-up, is a virtual catalogue of the New Look perfection. And how do they get out of all those fantastic frocks on Versailles and Outlander so quickly? The painstakingly executed sets are also key for any respectable decor-magazine-loving viewer. Who didn’t covet those mid-century-modern offices in Mad Men? And I could stare at the gorgeous royal interiors in Victoria all day long. Then again, I’ve been known to caress the door of an objets shop in Paris, exclaiming to completely uninterested passersby: “Did you know this used to be a monastery in the 1300s?” You don’t get a lot of that kind of architectural history in Canada, so I have to live vicariously through my good friends in the TV box.

I feel virtuous when I watch these shows because I’m not just mindlessly consuming soap operas—I’m learning about history. I’ve actually absorbed a fair amount of information from TV, and my stories have sent me running to the Internet many times to fact-check hotly debated issues, like “Did poor Prince Ernest ever find love even though he had syphilis?” (sort of), “Did Prince Philip really have an affair?” (probably) and “Did Prince Bertie really have a specially made threesome chair?” (yes). I’m also now a veritable encyclopedia on Western religions, wars, philosophical movements and, my favourite, hideous medical treatments. But, of course, all these things are just the backdrop to the juicy stories of the characters’ lives, which brings me to the final reason I love the costume dramas.

The best thing about these shows is how they treat women’s personal stories—and the myriad ways women had to man­oeuvre within the constraints of their era—as the main dish. There’s Victoria (queen), Harlots (prostitutes), The Crown (queen again for the win!) and Outlander (time-travelling feminist), but the best example of this is Call the Midwife, my favourite show of life. Call the Midwife is about a badass gang of progressive nuns and no-nonsense midwives who deliver babies and dispense free health care in an impoverished area of 1950s and ’60s London. Sort of a Downton Abbey meets Degrassi Junior High, each episode features our trusty band encountering social issues vis-à-vis the patients who come into their lives each sob-stained hour. Storylines have been built around alcoholism, racism, PTSD, domestic abuse, incest, sex workers’ rights, disabilities, life before access to birth control (spoiler alert—it wasn’t good), adoption, teen pregnancy, life before legal abortion (spoiler alert—it wasn’t good!), stillbirth and the radical justice that universal access to health care can foster, to name but a few. The most interesting thing about all of these series is the way the culture of a time dictates the intimate corners of women’s day to day, and there’s nothing more intimate than a show that always features at least one dramatic birth.

The takeaway? These wildly popular “chick shows,” often derided as gauzy bodice rippers— mostly by men who think comic books are much more worthy subjects—are some of the most political dramas around. Olden days, indeed.