What’s on Our Pop Culture Radar in July 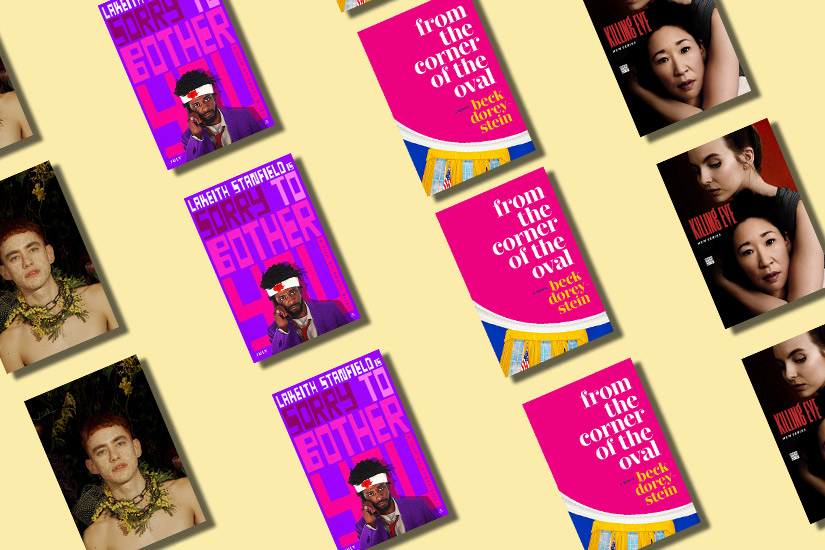 Warning: Eighth Grade will have you reliving some of your most awkward and embarrassing moments from middle school. The dramedy—which is the directorial debut of YouTuber turned comedian Bo Burnham—follows eighth-grader Kayla (Elsie Fisher) as she deals with her last week of middle school, struggling with the typical issues (puberty, anxiety, cliques), all with the added pressure of social media. You’ll laugh, you’ll cringe, but most of all, you’ll leave the theatre wondering how exactly 27-year-old Burnham managed to perfectly capture the mindset of a 13-year-old girl.

Channel your inner Tessa Virtue Technogym’s Skillrun treadmill. The Olympian-approved fitness equipment brand’s newest exercise tool is the first-ever treadmill that combines cardio and power training in one machine. The Skillrun comes pre-programmed with a wide range of workouts so you’re ready to go (we recommend parachute training, which recreates the feeling of running outside with a parachute on). You’ll reach the podium in no time.

SKILLRUN sets a new standard in performance running, meeting the needs of all runners. Thanks to the innovative MULTIDRIVE TECHNOLOGY, you can perform targeted and counter-resistance training, for a full workout on cardio and power components. ⠀⠀⠀⠀⠀⠀⠀⠀⠀ ⠀⠀⠀⠀⠀⠀⠀⠀⠀ #Technogym #SKILLRUN #performancerunning #running #wellness #workout #gym #treadmill #indorrunning #design #speed #training #gym

Come for Tessa Thompson’s statement earrings, stay for first-time director Boots Riley (of hip-hop-punk group The Coup)’s radical surrealist satire Sorry to Bother You. Lakeith Stanfield (Atlanta, Get Out) stars as Cassius Green, a struggling millennial living with his activist-artist girlfriend Detroit (Thompson) in his uncle’s garage, who finds success at his telemarketing job when he discovers his “white voice.”

A stenographer sounds like it could be the world’s most boring job, but not when it requires you to work in the Oval Office transcribing for the president. That’s exactly the position Beck Dorey-Stein found herself in when she left behind five part-time jobs to work for Barack Obama. Now, in her memoir From the Corner of the Oval, Dorey-Stein offers unprecedented, behind-the-scenes access to that era in the West Wing, navigating protocol, romance and political drama along the way, serving up one addictive read.

What if you lived out the drama of your twenties on Air Force One? Find out in @beckdoreystein’s FROM THE CORNER OF THE OVAL, a behind-the-scenes memoir that takes readers inside the Obama White House, through the eyes of a young staffer learning the ropes, falling in love, and finding her place in the world. On sale July 10th! #FromTheCornerOfTheOval #BeckDoreyStein #bookstagram #newrelease #igbooks #igreads #summerreading #memoir #obama #whitehouse #behindthescenes

Nothing says summer vibes like sitting back outside enjoying live music at the Beaches International Jazz Festival in Toronto. Celebrating its 30th anniversary from July 6-29, the fest hosts a bunch of events around the city featuring up-and-coming acts and Canadian favourites, like Jully Black. Best of all? Admission to every event is completely free, so take advantage while you can.

What’s better than a gin and tonic on a sunny summer afternoon? Gin that starts purple and then turns pink when you add mixer. You’re definitely going to want to try the gorgeous (and delicious) made-in-B.C. Empress 1908 gin ASAP. ($49.95 at lcbo.com)

“Beneath it all are some amazing conceptual historic underpinnings and the small distillery ethos of collaboration.” ✏️ by @ginfoundry #empress1908 #sundayvibes

If you don’t already know Phoebe Waller-Bridge, the brains behind/star of comedy-drama Fleabag, her latest show will put her on your radar. The debut season of Killing Eve finally arrives on this side of the border (July 22 on Bravo) after already completing its highly-acclaimed run stateside, earning plenty of Emmy buzz along the way. If that’s not enough to convince you: Sandra Oh returns to TV as the titular Eve, an MI5 officer who’s tracking down psychopathic assassin Villanelle (Jodie Comer), with both women becoming dangerously obsessed with each other in the process.

English synthpop trio Years & Years introduced an intriguing visual concept for its upcoming sophomore LP Palo Santo: a Westworld-like dystopian world with more androids than humans. And if “Sanctify,” the album’s lead single and accompanying music video, are any indication, it’s the perfect pairing for the smooth pop-stylings of frontman Olly Alexander and co.

Gone are the days of watching a movie at home and longing for a bucket of buttery theatre popcorn to hold in your lap. Cineplex has partnered with Uber Eats to deliver its famous popcorn (or concession stand snack of your choosing) right to your door from select theatres in B.C., Alberta, Ontario and Quebec. How much popcorn is too much popcorn?

Don’t freak out if you’re walking around Toronto and happen to come across a sculpture of a…brain? The Brain Project has installed 50 brain-shaped sculptures around the city—including at sites like Nathan Phillips Square and Union Station—for the summer to increase awareness of and fundraise for the health of our grey matter. Catch pieces by creatives like pop artist Hatecopy and Grammy-nominated producer/DJ Steve Aoki before they’re gone on August 31.

If it weren’t for the surrounding skyscrapers and Bay Street clientele, you’d think the new Drake Mini Bar was in the middle of a tropical paradise and not in the middle of Toronto’s financial district. (Cocktails like the tangy whiskey-meets-strawberry Ginger Rogers and the Eye of Calypso, a blend of rum, Aperol and toasted coconut certainly help.) We recommend sharing plates when you escape to this perfect summer oasis (the crispy squid and halibut cheeks are our personal faves), so be sure to grab some friends for company.

Hudson’s Bay and Canadian company Wear Your Label have teamed up in support of mental health awareness for The Future is Stigma Free Campaign. All sales from the exclusive cotton tee ($33 at thebay.com), meant to promote mental health and wellbeing, are being donated to the Centre for Addiction and Mental Health. Bonus: for every use of #TheFutureIsStigmaFree on Insta or Twitter in Canada and the HBC Foundation will donate another $5 to CAMH (up to $100,000).

In support of those affected by mental illness, we’re proud to partner with @wearyourlabel on an exclusive t-shirt with 100% of sales benefiting the Centre for Addiction and Mental Health (@camhnews). Join us in breaking the stigma and use the hashtag #TheFutureIsStigmaFree – For every post with the hashtag, the Canadian HBC foundation will donate $5 to the @camhfoundation (up to $100,000).

Canada’s Queen of Punk—a.k.a. Bif Naked—is taking the stage in Toronto at the inaugural Brave: The Festival of Risk and Failure on July 20. Apart from performing songs off her latest album, she will share her story of surviving addiction, abuse and cancer with honesty and optimism. If you can’t make it down to the Harbourfront Centre for the 20th, Brave fest is holding a wide array of events from July 12–29.

Blazing performances, spoken word and vibrant visuals have established @theoneandonlybifnaked as one of the most acclaimed performers to grace the rock stage. – On July 20, Bif Naked appears live at Harbourfront Centre to share her remarkable story with humour, honesty and outrageous optimism, and to perform songs from her most recent acoustics album. Presented as part of BRAVE: The Festival of Risk and Failure. For details and tickets, visit the link in bio. … #HarbourfrontCentre #BraveToronto #BifNaked

A post shared by Harbourfront Centre (@harbourfrontcentre) on Jul 4, 2018 at 6:33am PDT