Diggstown returns for a second season complete with intense court drama and some romance. 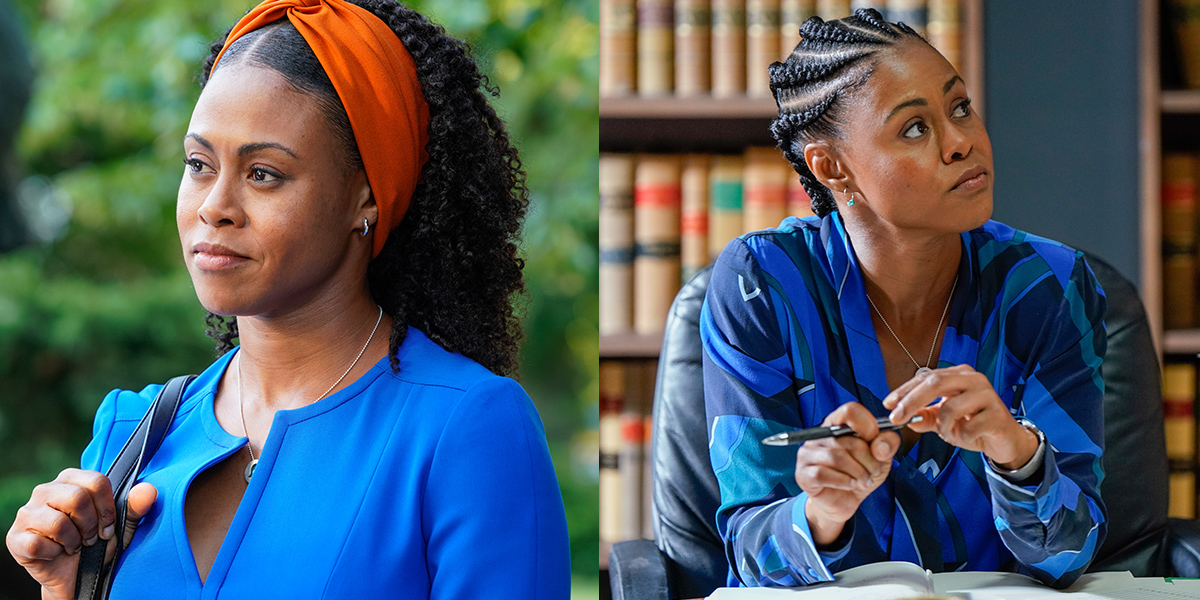 The show centres around Antoine’s character Marcie Diggs, a corporate lawyer-turned-legal aid attorney and surfer in North Preston, Nova Scotia. The series touches on themes of social justice and family issues as Diggs tries to navigate both personal and professional challenges.

We caught up with Antoine ahead of the season two premiere of Diggstown to chat about her relationship to the show’s sensitive subject matter, her creative goals and what she’s been listening to lately. (Spoiler: a fellow Canadian features prominently on her playlist.)

Congrats on the second season of Diggstown! What have reactions been like to the first season?

So far so good; people seem to like the role and the story. I think they also like to see their own country highlighted versus it being shot for an American city.

Are there any big changes in the second season with regards to tone or character development?

People will see that Marcie has found herself wrapped up in some cases that are higher stakes and we’ve got some murder happening. We’re going to see a shift in her relationship to the community she comes from as well. There’s more family stuff and a little bit of her dating life will be exposed as well.

What kind of prep did you do when you got the role of Marcie? Did you watch or read anything involving law beforehand?

When I spoke to Floyd [Kane, executive producer of Diggstown], in terms of the law stuff, he had me watch some TV that sort of mirrors what he likes. I went to court a few times in Halifax and saw how that works, which is very different from real TV. Real court is so boring, so the court that we see on TV is a lot more exciting. Other than that, I did a lot of surfing. I trained in that so I could actually get in the water and not die. [Laughs]

Do you like to surf in California now since you live in L.A.?

I took a break because it did get pretty cold. I’m a bit of a baby when it comes to the cold. Even though Nova Scotia was cold in the summer for me, in L.A. I didn’t have the right wetsuit. But as soon as I get back – this week actually – I’m going to go back in the water because it’s warm now.

A lot of the cases you work on as Marcie in the show are quite intense and deal with sensitive subjects. I’m curious how you go about immersing yourself in the scenes. Is it easy to switch off heavy emotions you may feel while shooting and leave them on set afterwards?

No – I’ve tried to switch it on and off but I found the best way I can deal with it is to just stay in it. As we get further and further into shooting, I just am Marcie Diggs. It affects me very deeply. Each case I become connected to not only the character but the actor or actress playing that character, because we end up spending so much time together. That then opens up another door, which is the actual issue at hand that we’re really dealing with. In this case, with the indigenous episode, I got really close to the actress playing that role and then the whole issue started unfolding from there like an onion. When I go home [after we’re completed filming for the season], that’s when I do a bunch of reiki and yoga and shake it out of my system.

When you go home, are you still interested in cases happening in the world that are similar to what’s happening in your scripts, or do you prefer taking a break from the news cycle?

I totally prefer taking a break. I don’t watch TV – it’s been hard living in the States, obviously, with everything going on. I got to a point where – to be perfectly honest and open – I deal with anxiety, so that kind of stuff sort of triggers it. I have to make a point to say “enough is enough” when it comes to some social issues, so I’ll take breaks.

I feel like I’m wasting time if I’m just sitting and binge-watching when I could take eight hours and learn something on the guitar. Or I could do something artistically – I’m trying to learn how to do photography right now. I just try to dive into another art form that I can at least say, “Hey, six weeks passed and I learned how to paint.”

That’s a much more productive way to go about having downtime.

I think so! Listen: There’s so much great TV out there and there are so many movies to watch so I want to support everything. But again, my anxiety kicks in and I’m like, “Oh my god, six months has passed, you know what I could have done in six months? Written a script, learned how to play the guitar…” I want to do everything.

Speaking of doing everything, I know you’re a trained dancer and have pursued theatre. Is there anything else you want to try, like directing or producing?

Directing is definitely where I would like to go next. I think photography is an interesting sort of segue into it. It’s helped me in putting pictures together in my head and having that come to life after just looking through lens and telling a story through a picture. I really love that, so hopefully it will manifest into directing an episode or a short movie.

Are there any spots in Halifax that have become favourites for you?

There’s a place called Little Oak, it’s close to where I lived.  It’s a tapas and wine bar and they play hip-hop. They have really great, knowledgeable bartenders who know their wine and they pair it with food really wonderfully. I’ll just sit in there and read my script and have my wine and have a small bite to eat. There’s another place called aFrite and they have great brunch and breakfast. The owner is really sweet.

Tell me a bit about the “Diggstown Sessions” that have been going on.

It’s the music that you’ll see and hear in the show. The artists have been wonderful and they did a live concert for everyone to check out, so all you have to do is register and you can see the performances. It’s an interesting way to watch TV, to see the music being performed live.

What music have you been listening to lately?

The new Justin Bieber album is fire. I don’t care what anyone else says, he’s amazing to me. He’s so talented. I’ve listened to the full album, that’s what I wake up with. When I’m super emo and super sad or in my feelings, I will listen to Jhené Aiko, all her stuff is great. Summer Walker has also been amazing. My son put me onto some hip-hop that I love, like Joey Bada$. He has much more of an east coast vibe and I’m much more of an east coast girl, living in New York for so many years. It feels like a bit of a throwback.

What’s next for you?

I literally just talked about this last night with Floyd, he was like “Where’s your script?! You’re focusing on these boys too much!” I get a little wrapped up with boys and dating. I was like, “I know, I know.” [Floyd] wants me to direct an episode if we get season three, but he’s like “I want to see a script first…” So I’ve been working on a short and I’ve just gotta finish writing the damn thing. I’m also working on a television show that I’m writing and producing with my partner Paula Brancati, which hopefully will be taking place in another year or so. But I’ve gotta get my short going.