TIFF 2018: Coffee with the Cast of The Death and Life of John F. Donovan 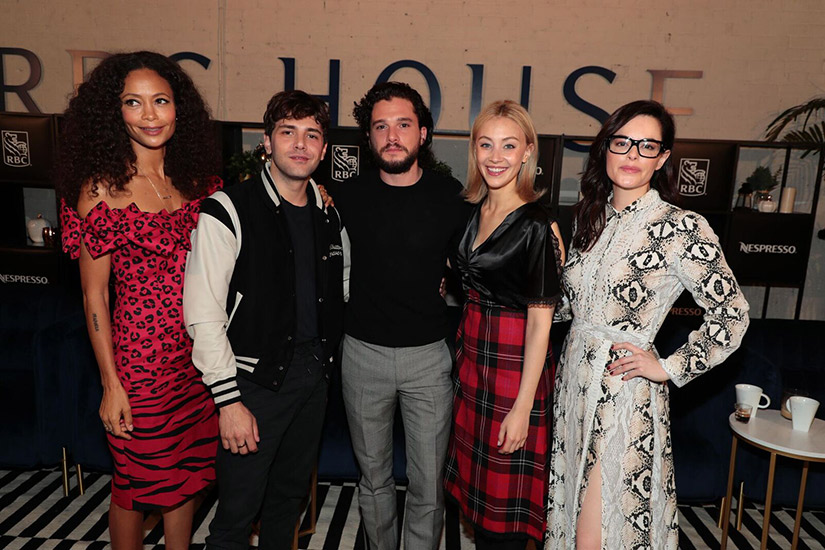 Coffee on the Monday morning following the first weekend of TIFF is an absolute must—it just doesn’t usually happen with the star-studded cast of one of the fest’s buzziest titles. But that’s exactly what we were doing earlier this week at RBC and Nespresso’s Coffee with Creators panel for The Death and Life of John F. Donovan, the latest film from Canadian auteur Xavier Dolan.

The 29-year-old actor/writer/director, who’s from Montreal, was on hand at RBC House along with stars Kit Harington, Thandie Newton and fellow Canadians Sarah Gadon and Emily Hampshire to chat about John F. Donovan, Dolan’s English-language debut. The movie—which also stars Natalie Portman, Jacob Tremblay and Susan Sarandon—tells the story, through flashbacks, of an American television star struggling with his sexuality (Harington) who exchanges letters with a young fan (Tremblay). It’s not a spoiler to say the actor, John F. Donovan, dies early on in the movie—it’s in the title, after all.

The inspiration for the film came from Dolan’s own childhood spent as young boy obsessed with television and movies. He often wrote letters to the actors he loved. “Back then, I felt like all I had were these shows on the WB: Roswell, Charmed, Buffy and Smallville. I felt that there was something soothing about these characters who had these powers and could sort of escape from reality,” the director explained. “The thing I notice now is that as much as I dreamt of actually identifying and relating to these characters, I couldn’t because they were all straight. I was craving for a figure, a model, and I was never given that.”

And while none of the actors never wrote back to Dolan IRL (“That’s just life.”), later that night at the film’s world premiere, the filmmaker—who also has a role in another TIFF film, Boy Erased—shared one of the super endearing letters he wrote to Leonardo DiCaprio as a child.

Xavier Dolan introduced THE DEATH AND LIFE OF JOHN F. DONOVAN at #TIFF18 by reading a letter he wrote at the age of 9 to Leonardo DiCaprio.

Eat your heart out, internet: pic.twitter.com/SoLmyK8wge

Here’s what else the stars had to say about the movie over coffee.

“[With John F. Donovan], there was a desire to address the situation in the industry about what place we give and what opportunities we give to the LGBTQ community, and what it is to try and be yourself and live your life with integrity. I think it’s very brave that [more artists are coming out], but does it reshape and redefine their career and their opportunities? I think so. That is what the movie is trying to address.”

Thandie Newton on the vibe on set

“It didn’t feel like a job, really. Xavier’s so invested and enthusiastic that you’re whipped up into that enthusiasm and it’s a canvas that you all share. There’s no sense of Xavier’s superiority. What I’ve found in the three decades I’ve been acting is that there’s a real hierarchy that tends to be set up in a film and there’s a kind of subservience that one feels to the director. With Xavier, there was just an equilibrium of everybody and there was no hierarchy at all.”

Sarah Gadon on working with Dolan

“Some people think that when you work with an auteur, there’s going to be this tyrannical relationship between you and them. There was just so much love that [Xavier] brought to his relationship with each person, that he really just injected you with a level of confidence to be autonomous in your own work. It was really special.”

“It was an interesting part to play, because he’s a young lad, a TV star from a popular TV show. It wasn’t far from…me. The bits that I really loved are moments of loneliness, like when he’s back in the hotel room looking out the window. It’s about his private life. When he’s left alone, who is he? I don’t think he knows, and that’s something I can definitely relate to in my own life.”

“Xavier is an actor first, and so he’s right there with you doing the scene. Also, he gives you the world. He also designed the costumes, and when he sends you the script, he sends you a beautifully bound lookbook. You are placed in this world that was in his mind, and now he lets you play in it—but with him.”