The top 5 moments from the 2018 Cannes Film Festival

From a shoeless Kristen Stewart to the buzziest movies. 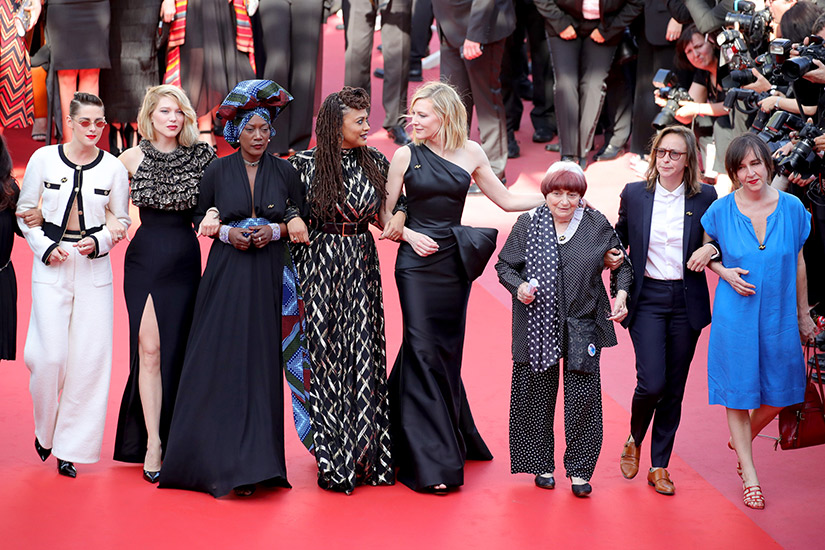 Stunning red carpets, the biggest celebs and almost two weeks of top-tier movies, all in the south of France. Here are the most talked-about moments from this year’s fest, which wraps this weekend.

A Stand for Representation

In a major rallying moment, Cannes jury president Cate Blanchett and Palme d’Or-winning director Agnès Varda joined arms with 80 other women at the top of the steps of the Lumière Theatre to demand more female representation at the festival. The reason there was 82 women in the group? Each represented one of the 82 female directors who have premiered a movie at Cannes in the festival’s 71-year history (yeah, you read that right). Together, the 82 women demanded equal pay, equity in the workplace and that Cannes achieve 50/50 gender parity across its entire lineup by 2020. A Wrinkle in Time director Ava DuVernay, Salma Hayek and Wonder Woman director Patty Jenkins were also part of the protest.

And if you’re curious: female directors makeup 24 percent of the entire lineup at this year’s fest.

The Return of Spike Lee

Not long after the premiere of BlacKkKlansman, critics were quick to hail the film as Spike Lee’s best in years. Starring John David Washington (Denzel Washington’s son and star of HBO’s Ballers), Adam Driver (Star Wars), and Topher Grace (That ‘70s Show), the movie is based on the true story of a black police officer infiltrating the group of infamous neo-Nazi David Duke. Afterwards at a press conference for the movie, Lee gave an impassioned speech about racism and the current U.S. administration, saying: “I hope this film shakes people from their slumber.”

Keep this one on your summer watch list—it’s slated to hit theatres August 10.

K-Stew is the Most Relatable

Imagine the pain you felt the last time you wore heels for a prolonged amount of time. Now imagine walking down a long red carpet and posing for photos while trying to ignore that pain—wouldn’t you rather take the shoes off? That’s exactly what Cannes competition jury member Kristen Stewart did. After stopping for a few photos at the BlacKkKlansman premiere, the actress defied the fest’s strict dress code, which requires women wear heels (insert eye roll emoji here) and kicked off her shoes.

Thandie Newton looked gorgeous in custom Vivienne Westwood, which also happened to be perfectly on theme. The actress hit the red carpet for her latest movie, Solo: A Star Wars Story, draped in a show-stopping dress decorated with black Star Wars characters from movies’ past. The look was the perfect celebration of the fact that Newton’s the first black woman to have a starring role in the franchise (outside, of course, of Lupita Nyong’o, who plays CGI character Maz Kanata in the latest sequels).

South Korean filmmaker Lee Chang-dong’s became an immediate favourite at the fest, earning rave reviews and plenty of online buzz. The slow-burning psychological thriller stars The Walking Dead’s Steven Yeun as a rich playboy who gets in the way of a young deliveryman’s (Korean actor Yoo Ah-in) crush on a woman he knew as a child. Burning—which earned the highest-ever score on film magazine Screen International‘s Cannes jury grid—is one of the movies competing for the festival’s top prize, the Palme d’Or, so it’s definitely one to keep an eye out for.