The Stars of The Marvelous Mrs. Maisel talk Season 2

The comedy is baaaaaack on Amazon Prime. 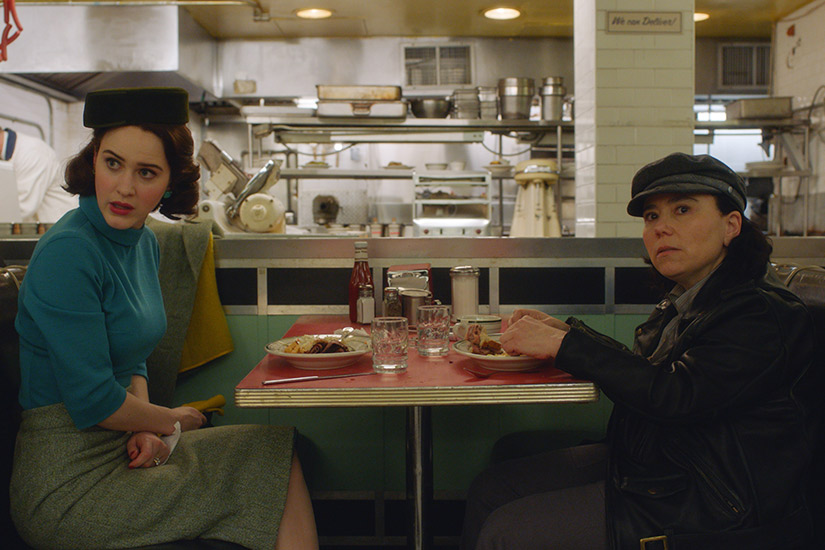 “I want to see fisticuffs,” Alex Borstein quips about her hopes for the future of The Marvelous Mrs. Maisel, in which she stars as no-nonsense comedy manager Susie Myerson. “I want to see them have it out. I think Susie could take Midge.”

“Yeah! Just punching each other in the face,” her co-star, the aforementioned Miriam “Midge” Maisel, Rachel Brosnahan replies. “But Midge would be a scrappy fighter. She’d scratch—she has long nails.”

The actors are, of course, doing what they do best together on screen: joking. They’re just as hilarious as they are duing their on-screen bits, in fact. One of the only differences between hearing them banter over the phone and watching them do it in character is that Amy Sherman-Palladino and Daniel Palladino (the wife-husband creative duo behind Maisel and Gilmore Girls) aren’t writing our conversation for them.

Brosnahan and Borstein are back in perfect, fast-talking form for season two of Amazon Prime Video’s award-winning comedy series (it won eight of the 14 Emmys it was nominated for just in its freshman season, tying SNL for second most wins out of any show at this year’s ceremony), about Midge’s journey to become a standup comic in 1950s NYC. But, of course, it’s not easy for the former housewife to break into the old boys club—even with comedy-club-booker-turned-manager Susie’s help. Oh, and she’s still hiding her newfound career her friends and family. We caught up with the stars to talk about season two (streaming now), Midge’s gorgeous outfits and working with the Palladinos.

Rachel, you’ve said season one was about a woman finding her voice. What’s this season about?

Rachel Brosnahan: It’s largely about the ripple effect of how that new discovery [of Midge’s voice] is affecting everyone around her. She’s worked very hard to keep her lives separate, to compartmentalize. Despite her best efforts, this season, all of her very distinct worlds begin to merge and collide and ricochet off each other.

Alex Borstein: Yeah, in season one she finds her voice, in season two we try to shut her up…no!

There’s a really funny moment early on in this season where Susie tells Midge they’re co-workers, not friends and Midge objects. How do you two view their relationship?

RB: I think that they are friends, it’s just that for Susie, she doesn’t really know what that means. She’s never had the luxury of having a friend, she’s mostly been focused on survival. And for Midge, that’s the only framework she has to understand a relationship with another woman.

AB: Yeah, it’s scary for Susie to have friends, to be vulnerable, to put herself out there. She wants to make a professional commitment and see if she can make it work, but doesn’t know if she can handle the responsibility of Midge and Susie still being nice together if this fails. For Midge, there’s just not as much weight on it.

Fashion is such a huge part of the show, especially when it comes to Midge’s stand-up performances, which sets her apart her male counterparts. What goes into those looks?

RB: At some point in season one, Midge’s mom says that [Midge] starts everything with an accessory. Her outward appearance is important to her; it reflects who she is and who she wants to be. Throughout season one, she’s trying to discover what her uniform is, what her name is, what that looks like. When she hones in on Mrs. Maisel, she finds this black dress and pearls that feel just right, so we’re experimenting with the black dress a lot this season. It’s become somewhat of her uniform.

AB: It’s interesting too because Midge is doing stream of consciousness comedy, she’s speaking the truth, but she’s smart enough to realize she’s presenting a character. The black dress is how she wants to present, it’s the shell for her material.

RB: Yeah, it’s what feels right. She also has a different kind of uniform when she’s working on material. That’s something we discussed a lot—is she still Mrs. Maisel when she’s testing out her jokes, when she’s not sure yet if they work? The evolution of Midge’s style is a journey I’ve been very excited to let [costume designer] Donna Zakowska take me on.

Alex, I know in terms of your costume, you actually told Amy Sherman-Palladino you wanted Susie to wear things like the suspenders and hat. Why was that?

AB: When I was auditioning, I looked online at what 1950s downtown village counterculture looked like. What I wore to my audition was not exactly what I saw, but what I had in my closet that felt similar enough. I wanted Susie to have armour. I wanted the suspenders because I felt like, literally and figuratively, she would never want to be caught with her pants down. I wanted the keys around her neck because everything precious to her is in eyesight and held close. And the hat was kind of just because…as a lazy actress, I didn’t want to spend that much time in hair and makeup.

And Alex, you’ve worked with Amy and Daniel before, on both Gilmore Girls and Bunheads. Did you have any advice for Rachel about working with them?

AB: Just get out of their way.

AB: [Laughs] I don’t think I verbalized it, like “Here’s my advice,” but I think Rachel saw me welcoming their direction and having a lot of confidence in what Amy sees and what she wants delivered. You feel pretty safe with them. It’s like putting yourself in a surgeon’s hands—you hired the best because they’re going to give the results you want. You can’t chicken out.

RB: It’s definitely an exercise in giving over. Alex and I worked a lot together early on in the series, and certainly watching her deal with them made me feel more confident about free falling into their arms.