The stars of the new sitcom also talk working with Amy Poehler. 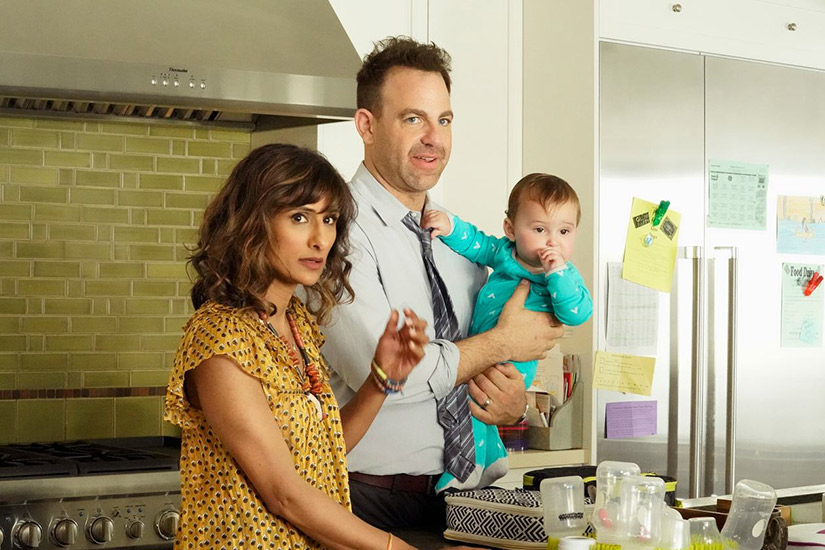 One very easy way to get actors interested in a comedy script? Put Amy Poehler’s name on the front page.

That’s exactly what happened to Sarayu Blue and Paul Adelstein, the stars of the new sitcom I Feel Bad. “I mean, [Amy’s] a comic genius. And she’s also incredibly kind,” Blue told us about working with Poehler, who’s an executive producer on the new show. “She’s really just interested in making sure everyone feels great and supported in their own work. You can’t ask for a better boss, really.”

In I Feel Bad—which is based on Orli Auslander’s book I Feel Bad. All Day. Everyday. About Everything.—Blue (Blockers, No Tomorrow) stars as Emet, a mom of three married to David (Prison Break’s Adelstein) who works as a storyboard artist at a video game company. Oh, and her very-involved parents live nearby. And like many women, Emet strives for perfection, tries to obtain the unachievable myth of the woman who has it all and—shocker—just comes up short.

We sat down with Blue and Adelstein while they were in Toronto earlier this summer to chat about their new show, which has a one-hour preview on Global on Wednesday.

What made you guys want to do this show?

Sarayu Blue: First of all, it just felt like me on a page. But it was also just very much this very human, very complex, very relatable woman, and about something that I think most of us feel. It’s exciting to see a role like that, that’s so fleshed out and hilarious.

Paul Adelstein: It was my favourite kind of comedy, which is real and relatable. It’s slightly elevated, but the characters also have a kind of self-awareness that sometimes you don’t see in comedies. When they’re bumbling, they know they’re bumbling, and I found that really charming. It felt like a really comedic take on that neurosis we all have.

Were either of you familiar with the book before the pilot?

SB: I wasn’t until the pilot. But it’s really funny.

PA: Orli sent us each a copy of it and she inscribed it.

Is this pressure to feel perfect all the time something you both related to?

SB: So much. I think all of us can. The thing people keep saying is, “Oh, this show is so relatable!” and it was everyone feeling that way. It was women, it was men, from all backgrounds. That kind of pressure to be perfect is debilitating for a lot of us, and so to get to see it and laugh about it, it’s kind of a relief.

Sarayu, as a woman of colour and the lead of the show, do you feel that pressure even more?

SB: If I’m going to be really honest…I’ve always felt that pressure. As a woman of colour, you feel that inherently you are representing. There’s no way around it. Every role you take is telling a story about this ethnicity. What’s really exciting to me is that I think this might be some of the most truthful and rounded storytelling of a South Asian family and interracial marriage that I’ve seen. This is the kind of thing I’ve been waiting to sink my teeth into and wondering if it would ever happen. So I’m happy to take it on.

And so how do you both handle this pressure?

PA: If you can find balance, you realize that you’re never going to actually feel perfect. That is an illusion—something I think is culturally driven into us. We don’t embrace our own foibles as much as we should. So it’s nice to get to play somebody with foibles who’s not an idiot.

SB: I lean on this guy, and my husband and my friends. I also feel like the older I’ve gotten and the more hits I’ve taken in life, I’ve realized you can only do what you can do. You’re going to f**k up. You just are. You’re going to let people down, you’re not going to nail it every step of the way. But as long as you’re doing your best and keeping your integrity and being a good human, you do what you do.

I Feel Bad airs a two-episode preview on Wednesday, September 19 at 10 p.m. on Global before airing in its regular spot on Thursdays at 9:30 p.m. starting on October 4.