The new season will premiere in April with at least one new cast member. 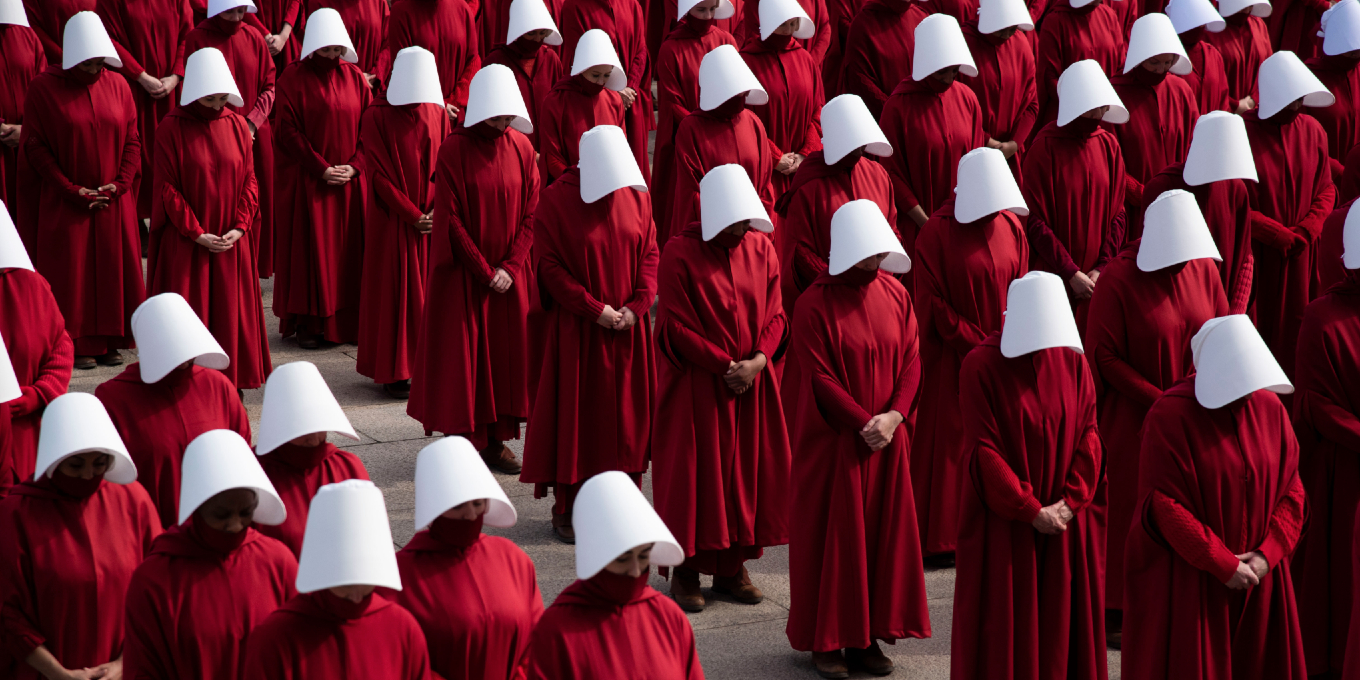 The first season of The Handmaid’s Tale memorably debuted just three months into Donald Trump’s presidency, making many of its dystopian themes—particularly the curtailing of reproductive rights—all the more resonant. After an almost two-year delay thanks to the pandemic, the show is finally returning for its fourth season on April 28, and will see June (Elisabeth Moss) leading a revolution against Gilead.

After successfully smuggling almost 100 children across the border to safety, June has found some measure of freedom herself, but per the official synopsis, “her desire for justice and revenge threaten to consume her and destroy her most cherished relationships.” And just like the political reality in the post-Trump era, many of the characters will find that their new, more hopeful existence has challenges of its own.

Moss and producers Bruce Miller and Warren Littlefield offered some teasers on what to expect at a virtual Television Critics Association Press Tour panel last week. So to tide you over through these last few weeks of Gilead withdrawal, here are their hints about what’s to come in season 4, plus everything else we’ve gleaned about the new season thus far.

“God, June versus Aunt Lydia,” Moss said with breathless excitement early in the panel, speaking for us all. After three seasons of understated tension, these two powerhouses will finally go head to head—because now that June is a wanted fugitive, Lydia’s fury knows no bounds.

“We’ve got Lydia in this season in a Javert kind of position,” Miller teased, referencing Les Mis, “where she is just obsessed with June and has so much of her personal worth tied up in what June is doing, and how much damage June is wreaking out in the world that she feels responsible for.” A big theme of the season is who bears responsibility for other people’s behavior, he added, and “although [June and Lydia] are kind of enemies in this story, they are inextricably linked. They spend a ton of time thinking about the other one and what the other one is doing. So it’s fascinating to have two people who really would like to be both rid of each other but who are tangled up with each other all the time.”

Moss added that power will be explored in a new way this season: “what real power means and who has it…power isn’t always what it looks like. Power can be dangerous. It can be something that is destructive. And I think, for both June and Lydia, they are both seeking power on their own journeys.”

Expect a lot of payoffs this season.

“This season, we are delivering,” Miller promised. “We are delivering on the things that we’ve set up, and I think that’s very satisfying.” Everybody involved in the show knows that it can be tough going, especially at times when there’s been no real end in sight to all the characters’ suffering, and this season, there is an end in sight. “This season, we weren’t waiting around. It was time for shit to happen. And I think that made me feel like ‘Wow, you can have shit happen, and you can still have a really interesting show,’” he said. ”It makes me think there’s a lot of life left in this story.”

Nick will be back—and in a brand new setting.

The absence of Max Minghella’s Nick in the back half of last season did not go unnoticed by fans, but rest assured, your favorite brooding Guardian will be back in the picture this season. In fact, he’ll be sent to Chicago, where an uprising is brewing.

“We’ve planted seeds for several years about this uprising and hot spot in Chicago and that the forces of Gilead really can’t keep it under control,” Warren Littlefield. “So Nick is going to be sent to Chicago, and now we leave our central universe around the greater Boston area, and, boom, we are in a completely different environment.”

Season 4 is a more “nomadic” season.

In previous seasons, there was one core Gilead setting around which the action revolved: in seasons 1 and 2 it was the Waterford house, and in season 3 it was Commander Lawrence’s house. There’s no equivalent in season 4, with June and many of the other Handmaids liberated. “In season four, we are nomadic,” Littlefield said. “We are following June’s passion, her drive, her relentless pursuit for change, and that takes us everywhere. We are out on the road. There is no home base.” Miller added that in contrast to previous seasons, which were often deliberately claustrophobic, season 4 is “exactly the opposite.”

COVID-19 didn’t impact the storytelling of season 4 much.

Production delays aside, the pandemic hasn’t impacted the content of the season in any major way, Moss and Miller said. Although some scenes in the first few episodes of season 4 do seem to have been shot in a way that allows for social distancing, Moss said that COVID-19 protocols didn’t force many changes. “Within the cast, within the sort of ‘Zone A bubble’ that we created with our very rigorous testing and quarantining and all of that, we were able to, thankfully, proceed with the performances as we would have wanted to even if we were restricted in numbers. At certain points, there were two people in the room. We were able to do what we wanted to do, and what we would have done anyway, which we were very grateful for.”

Season 4 will mirror the post-Trump era.

“A lot of the show this season is about waiting for things to snap back to normal, and expecting things to snap back to normal, and why aren’t they snapping back to normal?” Miller said. “That feeling of wondering when the world is going to settle down after things have changed is something we cover in small and large ways this season.” Although there’s no conscious effort to rip stories from the headlines any more than there was in previous seasons, parallels remain inevitable. “We are all people living through a political time, and a lot of our media is about big things that we really can’t relate to. But the show is more about a human being living through the time where the politics started affecting them, when the politics starts reaching into your bedroom or gets between you and your child.”

The Handmaid’s team may well reunite to adapt The Testaments.

Since Miller and co. have the rights to adapt The Testaments, Margaret Atwood’s follow-up novel, the trio were asked if they had discussed the future of the Handmaid’s world. “I certain am fascinated by what happens in The Testaments, and if that’s going to be part of our future, that’s a bigger question,” Miller demurred, before adding that he’s game to continue for as long as Miller and Littlefield were in it with him: “As long as Lizzie will do this with me, as long as these two are with me, I’ll keep going.” Moss’s response? “Right back at you, boys.” So while it’s far from a confirmation, it’s probably a safe bet that The Testaments is coming eventually.

June’s journey, more than ever before, is about rage.

Unsurprisingly, June isn’t able to simply adjust and move on now that she’s (potentially) free from Gilead—even when there’s a pressure for her to do so. “So much of June’s journey, especially in the back half of the season, is about a feeling of rage and anger, and about the desire to sweep things under the rug, the desire to say that everything is okay now…the desire to say that it’s all going to be fine and everything’s going to be all right and nothing was ever a problem and let’s just forget everything that just happened,” Moss said. “June’s journey is sort of screaming into the wind, ‘We will not forget,’ and I think that’s extremely relevant.”

The first footage of The Handmaid’s Tale season 4 emerged in June 2020, compiled from a few weeks’ worth of filming and shots from previous seasons. The promise of war between the government and those who seek to overthrow it looms. “I can’t rest. My daughter deserves better. We all deserve better. Change never comes easy,” June says in the teaser. “This war isn’t going to win itself.” Commander Joseph Lawrence (Bradley Whitford) similarly predicts, “What happens in the next few weeks will determine the future of this country.”

Miller spoke to this brewing revolution during a post-season 3 interview with The Hollywood Reporter. “She’s not going to leave without Hannah,” he said of June’s iron-clad motivation. He also addressed the severity of her actions at the end of the season: “As far as Gilead is concerned, those children are legally under their law. They’re in someone else’s family, they have parents. From their point of view, you’ve just taken adopted children and flown them out of the country, and some of them aren’t from people out of the country…So, I think that Gilead, from their point of view, under their set of codes, is going to be ready to go to war over this.”

On February 25, 2021, Hulu released a full trailer for season 4 along with a synopsis:

“In the 10-episode upcoming season, June (Elisabeth Moss) strikes back against Gilead as a fierce rebel leader, but the risks she takes bring unexpected and dangerous new challenges. Her quest for justice and revenge threatens to consume her and destroy her most cherished relationships.”

In January, Moss told Deadline that she directed episodes 3, 8, and 9 of season 4. “I guess it meant that I did a good job, which was exciting,” she said.

Season 4 will welcome at least one new cast member.

Several cast members have been confirmed to return for season 4. They include Moss, Alexis Bledel as Emily, Joseph Fiennes as Fred Waterford, Yvonne Strahovski as Serena Joy Waterford, Minghella, Whitford, Samira Wiley as Moira, Ann Dowd as Aunt Lydia, O-T Fagbenle as Luke, Madeline Brewer as Janine, and Amanda Brugel as Rita. After playing a pivotal role in the season 3 finale as American representative Mark Tuello, Sam Jaeger (The Politician, Parenthood) will be a series regular this season.

Mckenna Grace (The Haunting of Hill House, Gifted) has also joined the cast, Deadline reports. She’ll play Mrs. Keyes, the much-younger wife of a Commander, who “rules her farm and household with confidence,” per the outlet. Keyes is also described as having a “subversive streak” and ability to put on a calm front while chaos reigns inside.