The Cast of 'The Crown' Discuss All Things Season 4

Olivia Colman, Helena Bonham Carter and Tobias Menzies on what to expect from the new season and saying goodbye to Netflix's hit royal drama.

Can one ever really get better at playing the Queen? Apparently, in the case of The Crown, the answer is yes – even if you’re an Oscar-winning actor.

“I was at the second read-through and [series creator] Peter Morgan turned to me and said, ‘Oh, you’re all doing so much better this season,’” star Olivia Colman, who plays a middle-aged Queen Elizabeth II in season’s three and four Netflix’s hit royal drama, says during a press conference ahead of the show’s upcoming fourth season. “And I said, ‘Of course! We’ve had time to sit with it and stop [over-] thinking everything.’ This is our second time around, so we’ve lived with these characters. I think there was a compliment from Peter in there, but it was, perhaps, a double-edged one.”

Season four of The Crown, which debuts on November 15, covers the late ’70s to the early ’90s, exploring the tenure of Britain’s first female prime minister, Margaret Thatcher (played by Gillian Anderson), and the seemingly fairytale-romance that quickly sours between Prince Charles (Josh O’Connor) and a young Lady Diana Spencer (Emma Corrin). Colman joined her fellow costars Tobias Menzies (Prince Philip) and Helena Bonham Carter (Princess Margaret) for a virtual panel to chat about their final season in their royal roles. Here’s what we learned.

“Their main troubles have settled down and now they’re trying to help their adult children their own,” Colman says. “All parents have experienced their child going through a horrible time. It made for great drama and storytelling. There’s a lot of soul searching.”

“There are similarities between Philip and Diana. She’s an outsider – a position he has obviously been in,” Menzies says. “Maybe he has kind of an appreciation for the challenges she’s going through. But I think, on a very basic level, he just think she’s a good fit. In an old fashioned way, he likes her femininity, her beauty. He’s very seduced by her.”

“According to our version of the story, it becomes very, very clear – even before their marriage – that there are big problems [between Charles and Diana]. It’s already compromised,” Bonham Carter says. “I like to credit myself for this idea: At one point, Margaret pipes up and says, ‘Hang on, I’m not going to be part of this.’ She’s not going to interfere with a marriage after [her earlier relationship] was back when Vanessa Kirby [played her].

“I think she had a sympathy for Diana. She saw Diana being picked up by the press as a fashion template, but she also knew that there was going to be a honeymoon period and how quickly the press could turn. And marriage is a complicated thing, and then there’s the [royal] duty. There’s very little emotional life or understanding. She can see that Diana is too young. Humans have emotional reactions in their hearts, and if they’re not going to be happy, they’re going to be useless for the country.”

“It was quite scary,” Colman says. “So much of our job is done for us by the incredible hair and makeup teams, and wardrobe. We wouldn’t be as good without them. They outdid themselves with Margaret. Sitting opposite her, especially when the light was behind her, was a bit scary. And Gillian’s voice and walk were very funny. It was very difficult to keep a straight face. It was like having a ghost around.” 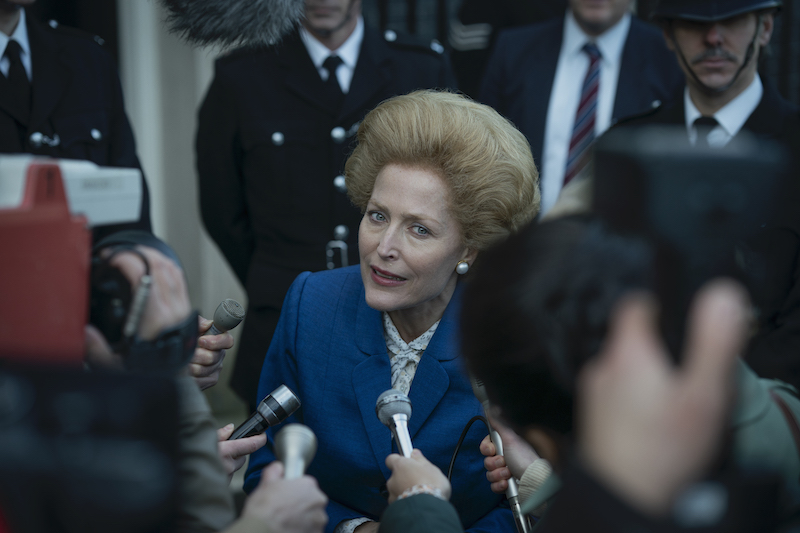 Gillian Anderson as Margaret Thatcher in season 4 of The Crown. Photography by Des Willie/Netflix

“There’s no doubt that if she had lived during a different era, she would have had an an entirely different life. Margaret would have fared much better now,” says Bonham Carter. “There’s much more tolerance now talking about mental health. She couldn’t have depression during her time, or in that family. She lived through a time that was very unforgiving of human emotional fragility.”

Big group scenes are fun for the cast, less so for the crew

“It’s hilarious. We play ridiculous games and have too much fun,” Bonham Carter says. “By the end of it, we weren’t really concentrating. We were just going in and having a giggle. [Filming] in Scotland was my favourite part of the whole thing.”

“It was brilliant because we had more kids come in,” Colman adds. “They just let the cameras run to see what happens. The kids would get the wrong camera and start bashing each other over the head and running around. And the dogs!”

Adds Bonham Carter with a laugh: “I had pockets full of biscuits!”

They hope to speak with the actors taking over the roles

“But only if she wants to,” explains Bonham Carter of Lesley Manville, who is taking over in the role of Princess Margaret. “Vanessa Kirby was so generous. It’s kind of like handing over a baton in a relay race, but it never comes back. I want to hand over my cigarette holder and say, ‘Good luck with this.’ But I could give a lot of tips if she wanted. I could set a whole Margaret school by now.”

As for if Imelda Staunton, the new Queen Elizabeth? Colman says: “If she calls me, I’d be so excited. I’d say, ‘Good luck. The wig is itchy. Work on your walk.’ She’s already got a much better walk than me though.”

Helena Bonham Carter as Princess Margaret in season 4 of The Crown. Photography by Netflix

“No, I think it’s just bitter,” Colman says, laughing. “I’m very sad that it’s over. But it’s time that she’s played by somebody else. [Being her] was a great gift, and it’s been really fun. I had a real sense that she was sitting with me, which you get sometimes as an actor. It’s like having a hotel and somebody comes to stay.

“And there’s also something about this job. It’s been over two years with all of us, and that never happens. I’ve never done something like this. There’s been an ease – it’s nice knowing what the hell you’re doing from one month to the next. It’s such an immaculately run ship. I’ve had such a great time and I can’t believe I’ve been paid to do it.”

The Crown Will Run for Six Seasons After All