The Cast of Netflix's 'Ratched' Discuss Their Buzzy New Show

Stars of the psychological-thriller include Sarah Paulson, Cynthia Nixon and Sharon Stone. 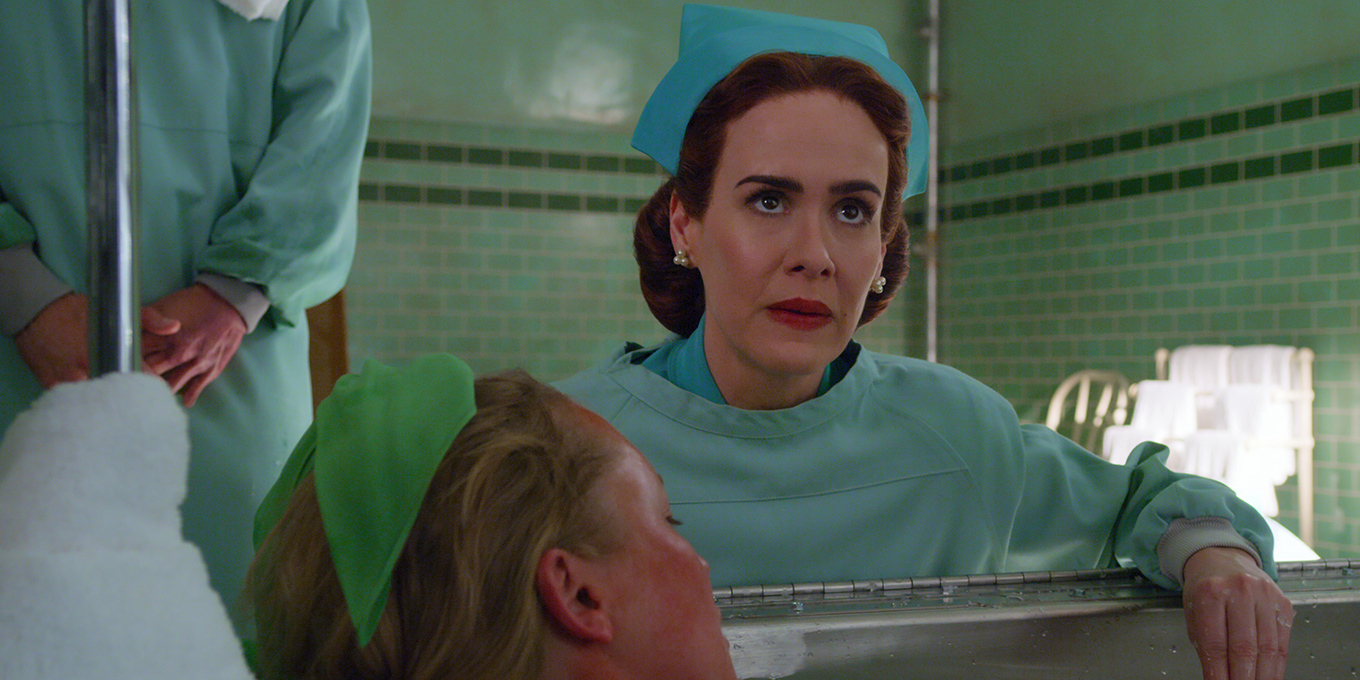 It’s like the old adage says: If Ryan Murphy makes a television show and Sarah Paulson isn’t in it, does it even exist? Okay, not really, but the point stands: with many, many collabs in their pockets (including eight different seasons of American Horror Story and The People vs. O. J. Simpson: American Crime Story), it’s no surprise when Paulson does show up in a Ryan Murphy-backed project. Something that is a bit more shocking? With psychological-thriller Ratched – the newest Netflix series from Murphy and co. – the 45-year-old actress is stepping into the starring role for the first time in their working relationship.

“This one was very different for me because Ryan was very, very interested in empowering me in a way that I had never experienced before,” Paulson says during a press conference of her experience working on the show, of which she is also an executive producer. “I’d never played a titular character before I had never owned a piece of a show before. I’d never been an executive producer of a show before. And this is all because of him.”

In Ratched, which debuts on Netflix on September 18, Paulson stars as Mildred Ratched. If that name sounds familiar, there’s a reason: the series is an origin story of the woman who goes on to become the authoritative asylum nurse in One Flew Over the Cuckoo’s Nest. The cast also includes Finn Wittrock (another frequent American Horror Story star), Cynthia Nixon, Jon Jon Briones (The Assassination of Gianni Versace: American Crime Story) and Sharon Stone. We joined a wide-ranging press conference with the star-studded group to find out everything we could about the show.

On working with Ryan Murphy on Ratched:

Sarah Paulson (Mildred Ratched):  “Part of the reason why I was so terrified to do [this show] was that I don’t have a ton of experience ‘stepping into my power,’ which is what Ryan would say to me over and over again. Thinking about it literally makes me want to take a hot shower and run screaming into the street because I don’t really know what that means. But he does. It was interesting to confront my hesitation. But he always has been my greatest champion. And it was an interesting experience to think beyond my own narrow view of just my own performance and think about the show with whole and what the story was.”

Finn Wittrock (Edmund Tolleson): “He was even more meticulous than he sometimes is and really cared about the nuances of the way [the show] looked and felt. He’s pretty hands-on in that way. It’s generally fun to be on a Ryan Murphy set. Even when it’s, like, the craziest, bloodiest, saddest scene, there’s kind of a party atmosphere that he can bring to it.”

Sharon Stone (Lenore Osgood): “Ryan took me out to lunch and offered me this part – he told me that he’d written it for me. I didn’t say anything, and he was like, ‘Well, aren’t you excited?’ And I said, ‘I don’t know yet.’ And I mean, of course, I was excited that Ryan Murphy wanted me to work with him. But you never know how big the cliff is that you’re going to have to jump off, and, of course, I’m not really used to working in television. When I first started working [in this industry], it was me and 300 men. Even [the stylists] were men. So to come to work on Ratched and have women behind the camera, as sound people and represented in every department was [different]. I don’t [usually] have this opportunity to work within these fine subtle, intimate, layered, tender lines alongside other women. It was so meaningful to me.”

On getting into character:

Paulson: “I think it’s safe to say that many people are familiar with the One Flew Over the Cuckoo’s Nest movie and the iconography of it. So, you know, no pressure, it’s totally fine. But it wouldn’t have been interesting to me to explore the parts of Mildred that aren’t porous. In the movie, there’s a hardness that ekes out of her – she’s absolutely evil. But when I rewatched it before we started [on the show], I saw her as a woman who’s sort of a victim of a patriarchal infrastructure in this hospital and it could possibly be considered that she didn’t have any choice about what’s happening at her work. Could she bring her womanhood to her job? Should we consider the idea that she’s not a villain but a person who could do nothing [other] than toe the line? And, obviously, the ramifications and consequences of [her actions] are devastating to many of the people under her care, but, to play this, I had to believe that she did everything because she thought she was adhering to some kind of rule and what she thought was most right. I had to find a way into her without just being like, ‘She’s so crazy.’ We effectively gave her some humanity that was missing from any other portrayal that we’ve seen of her before, whether in literature or in film.”

Cynthia Nixon (Gwendolyn Briggs): “Gwendolyn is a really interesting character and very different from the usual kind of things I’m asked to play. I would say particularly, as I’ve gotten older, like in the last 10 or 15 years, I’ve been asked to play a lot of what we would politely call ‘complicated people,’ but they’re sometimes bordering on malevolent. The thing about Gwendolyn is that she’s so wholehearted and she’s so pure and she’s so confident and she is up against so many odds, She’s a queer woman in 1947. She’s trying to make a life for herself in politics. She’s taking on all of these seemingly impossible tasks that she sets for herself. But she moves ahead seemingly without fear.”

Repost from @mrrpmurphy: Ratched got her peach back. Blood is shed…but not a drop of juice. New trailer drops tomorrow.

Jon Jon Briones (Dr. Richard Hanover): “He, just like all of the other characters, is really up against something, this undoing. He truly believes that he can help people and he’s doubling down on his capability. But, at the same time, his ego gets in the way gets him into trouble, which, [as an actor] in Ryan’s world, is wonderful because that’s when mayhem ensues.”

On exploring themes around queer identity and mental illness:

Nixon: “One of the overarching themes of Ratched is not only the brutal treatments that were used against people who were deemed mentally ill, but what fell under the umbrella of mental illness. We have characters who have turned to murder or develop multiple personalities because that was literally the only way they could survive. And, obviously, we have examples of characters who are persecuted for their gayness. [The show] is about these people who, for whatever reason, didn’t fit into the narrow version of the acceptable box in the ’40s and ’50s and what the medical establishment chose to do about it.”

Paulson: “Although this story has many elements that are queer-centric, I don’t think of it as a story about a woman who is on a journey of discovering that part of herself. At its heart, Ratched is about a woman who wants to absolve herself from this horrible guilt. The only place where this is joy in Mildred’s life is in her relationship with Gwendolyn. It’s the first time where she’s had any opportunity for happiness and I love that element of this story. The queer component is one of love and joy and an opportunity for Mildred to feel seen for the first time and explore these parts of herself.”

The Politician Was a ‘Dream Come True’ for Star Laura Dreyfuss