The Best Halloween-Themed Episodes of our Favourite TV Shows

Welcome to the witching season. 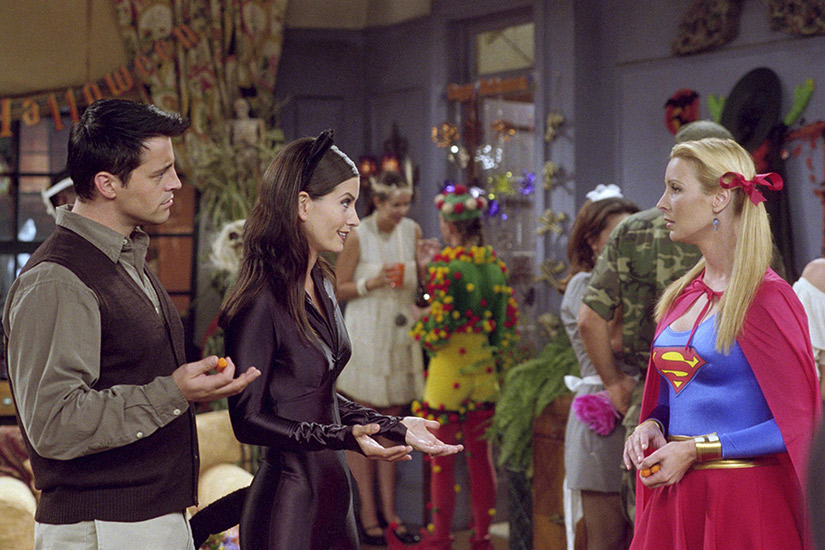 Halloween is fast approaching and if you’re not already pretending you’re in a Hocus Pocus situation or using Practical Magic as daily style inspo, we have just what you need. To help you get in the spooky mood, here are the best Halloween-themed episodes from our favourite shows.

This episode of the ultimate October binge show has it all: trick-or-treating, Ghostbusters costumes, Halloween parties and the Hawkins crew getting involved in eerie shenanigans. Plus, Eleven’s ghost “costume”—a.k.a. a plain white sheet with eyeholes—is nothing short of adorable.

Even on Halloween, This Is Us just had to make us cry. That’s okay, though—we still love “The 20’s” because we get glimpses of the Pearson family during different Halloweens in their lives. The best moment: everybody’s fave couple, Jack and Rebecca, taking the Big Three out trick-or-treating as Sonny and Cher.

We’ll admit this isn’t technically a Halloween episode, but that doesn’t mean it can’t get us in the Halloween spirit. A bunch of privileged Upper East Side teenagers decked out in extravagant outfits attend a glamorous October masquerade ball where seemingly everybody is into everybody and nobody’s identity is known. What could possibly go wrong? Well, this is Gossip Girl, so a lot. But couture costumes and over-the-top drama? We’re in.

How I Met Your Mother

We’ll blame the early 2000s for the not very woke title, but this episode is still a Halloween classic. There’s hopeless-romantic Ted waiting all night at a Halloween party to see a girl he met once years ago; codependent lovebirds Marshall and Lily hoping to win a costume contest at the bar; and ladies’ man Barney trying to get Ted to come hang with Victoria’s Secret models instead. So, you know, exactly what you’d expect from HIMYM.

Parenthood’s take on Halloween is the perfect amount of relatable and adorable. It’s hard not to feel bad for Zeek when he tries (and fails) to get his teenage grandkids into the Halloween spirit with him. And the way Crosby proposes to Jasmine­—with a spider ring while sneakily eating their son’s candy­—melts our hearts.

The Office has given us many great Halloween episodes, so it’s no easy task to choose just one. But “Costume Contest” has a special place in our hearts because it’s Michael Scott’s last Halloween at Dunder Mifflin. Our favourite paper-company employees don crazy costumes (see: Lady Gaga, the Scranton Strangler and Snooki) to win a coupon book. Ironically, it’s Oscar, contest and coupon-book boycotter, who ends up taking home the prize because nobody actually understood what he was trying to do.

All of the seasonal favourites—pumpkin carving, haunted houses and ridiculous costumes—are brought to life in “Halloween.” But it wouldn’t be an episode of New Girl without loftmate shenanigans, like Schmidt changing into a second costume for the drama of it all, Winston ending his relationship in the middle of a haunted house and Nick accidentally hitting Jess when she unintentionally scares him. Nothing out of the ordinary here, folks.

“Boo! Humbug” taught us that with a childlike love of Halloween comes a night of fun. For Karen and Jack, that means dressing up in barely recognizable costumes and making fast friends at a street party. And even the grumpiest of grumps (looking at you, Will and Grace) can rediscover the magic of Halloween with some silly string and candy.

Episode: “The One with the Halloween Party” (Season 8, Episode 6)

No holiday would be complete without a Friends episode to go along with it. The aptly named “The One with the Halloween Party” blessed us with gems that we remember every October 31—there’s the pink bunny costume Monica buys Chandler, pregnant Rachel giving all the candy to one kid who says she loves her and Ross’s goofy Spud-nik costume. It’s quintessential Friends.

The annual Halloween Heist is a Brooklyn Nine-Nine staple, with each hilarious episode worthy of a seasonal rewatch. But if we had to choose a favourite, first place would go to season five’s “HalloVeen,” because what can top Jake using the heist to elaborately propose to Amy? Nothing.

Stars Hollow is the quintessential fall town that we all want to escape to. But Gilmore Girls only delves into Halloween once. “Twenty-One is the Loneliest Number” finds the townspeople preparing for the festivities and even shaming Lorelai for not having scary enough decorations. Once Luke agrees to help make her new Halloween idea come to life, there’s gallows and mad scientists to scare the kids. Count us in!