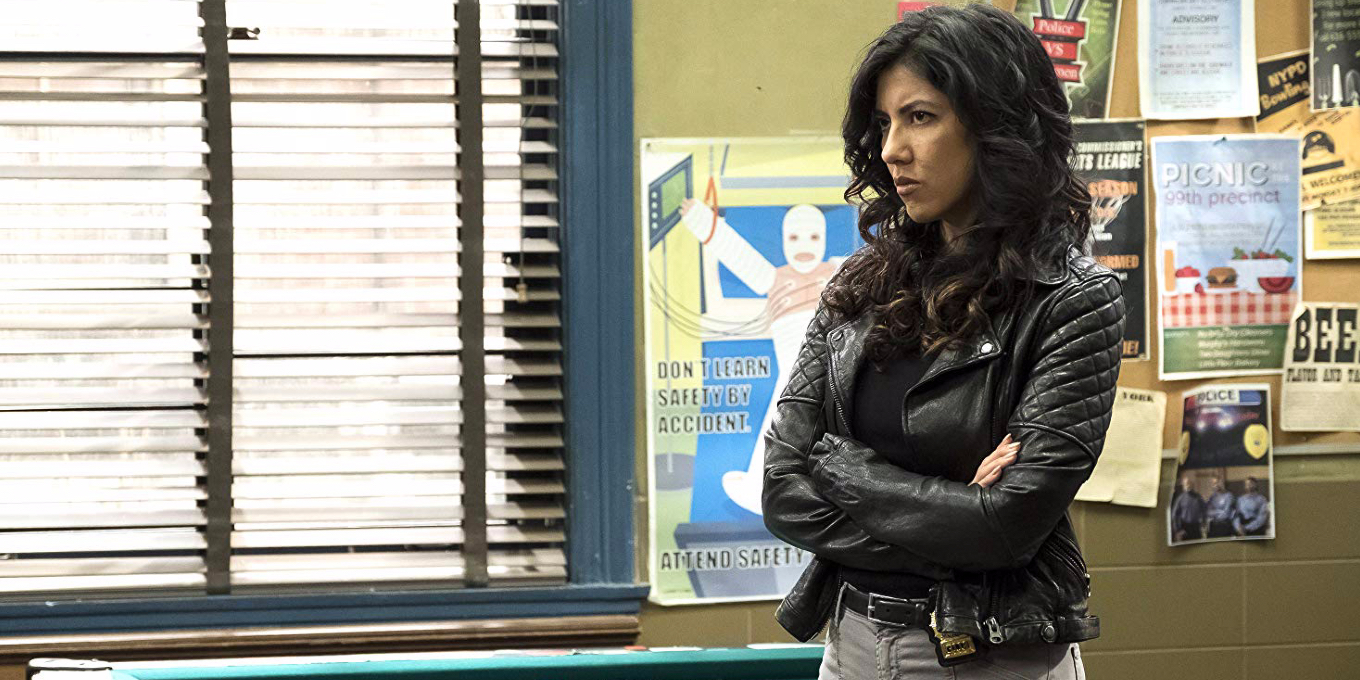 “You asked for it honey,” cautions Stephanie Beatriz, half joking. In the voice of Detective Rosa Diaz, her hard-edged, no-nonsense Brooklyn Nine-Nine character, the phrase might be intimidating. But in the actor’s natural, warm timbre, it’s yet another example of Beatriz’s open-hearted disposition. After all, the warning comes as she pads through her L.A. home to the stack of books on her bedside table, stopping to lovingly coo at her dog before answering our question with an impassioned, only slightly off-topic tangent about her love of reading. It’s an enthusiasm Beatriz brings to her work as well, whether in her breakout role in the indie fave Short Term 12 or while flexing her comedic chops in her roles on Modern Family and One Day at a Time. This summer, she’ll appear in the highly anticipated In the Heights, based on the musical by Hamilton scribe Lin-Manuel Miranda and directed by Crazy Rich Asians’ Jon M. Chu. But first Beatriz gets back into Rosa’s trademark leather jacket with Brooklyn Nine-Nine‘s return for season seven this winter.

“It’s like some kind of alchemy happened when Brooklyn Nine-Nine was put together. That’s what surprises me the most—ain’t nobody tired of it. I’m surprised by how funny and fresh the scripts are because that doesn’t always happen in comedy. Like, let’s be real: Sitcoms can get old. There’s still so much to be explored, and we all like each other a lot. I’m very grateful.”

“I feel really compelled in my life to help tell stories, whether that’s as an actor or a producer or a director. We’re realizing as a global community that we’re tired of [seeing] the same story over and over again, and that’s because the same kinds of people are telling that same story. There’s room for more voices, and I’m one of them.”

“When I got an audition for In the Heights, I was horrified. I thought: ‘This means I’m going to have to sing in front of a room full of people. I’m not good enough.’ But then [co-star] Melissa [Fumero] and my husband were like, ‘Are you crazy? Just go for it.’ So I went in and tried and was cast. It is an experience that I will never forget. I feel really strongly that it changed me deeply as a person and as an actor and a performer.”

“Sabrina & Corina by Kali Fajardo-Anstine. It’s an incredible book of short stories by an Indigenous Latina woman. I’m getting a copy for almost everyone I know because it’s so beautiful.”

“I love Cosmedix Purity Clean because it also doubles as a mask. And I’m obsessed with Masque Vivant from Biologique Recherche. It has really helped my skin a lot.”

“This is where Rosa and I are the same person—I have an embarrassing amount of leather jackets. I have a couple from vintage stores and a great one from Soia & Kyo.”

This article originally appeared in the March 2019 issue of ELLE Canada. Subscribe here.

Billie Eilish’s Oscar Reactions Reminded Us We Are Old