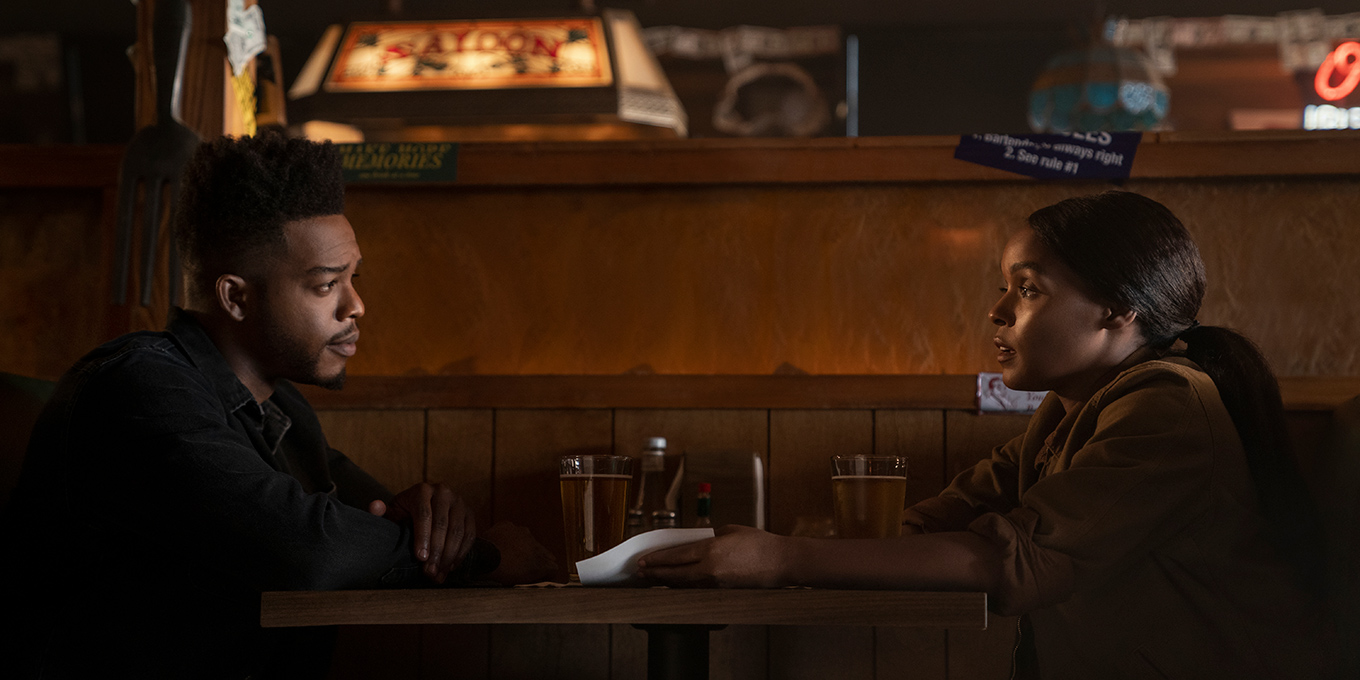 The last we saw of Walter Cruz, the main character in Amazon Prime Video’s acclaimed thriller series Homecoming, the American veteran was a little confused about his past. The Homecoming program, purported to help veterans ease back into civilian life, turned out to be more tumultuous than he had bargained for.

The last we saw of Stephan James, the beloved Torontonian actor, he was gracing ELLE Canada’s September 2019 cover alongside Winnie Harlow, discussing his roles in films like If Beale Street Could Talk and Selma.

It’s safe to say that things have changed drastically both on television and in reality: season two of Homecoming finds Walter encountering new challenges as he digs for information about his past alongside a new co-star, Janelle Monáe, whose story intertwines with his own. And instead of chatting with James at a bustling city establishment, we reached him via Zoom at home in Toronto.

James talked to us about working with Monáe, what he’s been watching while self-isolating and the first thing he wants to do in Toronto when quarantine is over.

How did you react when you first read the script for season two?

I loved the season two scripts. I think I was even more excited about some of the season two stuff than I was in season one. For me, it felt like an opportunity to make Walter whole. For so much of that first season he was literally losing himself by the day, so the second season was an opportunity to sort of work backwards and to just fill in all the missing pieces.

It was incredible. I had been a big fan of Janelle musically. We had met a few times and once I found out that she was going to be coming on to star on the show with us, we were just so excited. I don’t think anyone’s seen Janelle in a role quite like this – and she kills it. Her attention to detail and focus every day, it was maximum. It was a joy for me to witness as an actor and really cool and easy to work with her.

Do you have a favourite scene you did with her?

There’s a scene where Janelle and I are walking through the woods on this long walk-and-talk. Our conversation comes to a head at the end of our walk in the forest – we were up in the north side of L.A. somewhere. It was a really nice day and  it was really just the day that Janelle and I went in the confines of the of the studio and we just had time to sit in nature and enjoy each other’s company. I remember it being a great day with a lot of great conversation. The walk-and-talk was a little bit challenging, but we did a lot in real time to kind of make it work. There was a lot of team building that happened that day.

How did you relate to Walter when you first got involved with Homecoming? Has your relationship to the character changed with the new season?

I’ve always been intrigued by by Walter. It’s easy to be intrigued by someone who we know very little about and so that was sort of my doorway into to Walter – who is he? Where is he? Where is he from? What are the things he likes? What are the things that are important to him? So as a young man, I’m tapping into that from the from the perspective of a young veteran. All these things are just so compelling and so relevant to everyday life. I think that’s where it started for me. And I think the intrigue only grew this season, as I was able to sort of peel back the layers of the human being he is to give him a level of humanity that he probably didn’t even possess in that first season. That was what was really exciting for me going into this season – knowing that I was going to be able to make him whole, to answer some of those questions. He wasn’t going to be this naive character anymore that we had been taking advantage of. He was going to take back his power.

When you play Walter, do you find it easy to kind of separate that character from who you are in real life?

It’s very immersive. Obviously there’s a lot that I can relate with Walter on, us just being young men trying to figure out life.  I really see eye to eye with him in terms of being misunderstood, which I feel Walter really is – not knowing who you could trust. Those those are all things that relate to.

Since season one premiered, you have also starred in a film and a web series. How does your prep for projects differ based on the medium – and specifically, how did you prep for Homecoming this time around?

I think that the great thing about Homecoming is that it’s not like a lot of TV shows where you will shoot an episode and go to a read-through of the next episode. We kind of get to read everything beforehand so I don’t really differentiate the process from making a film. It just felt like I was making a long film, both in that first season and in the second season, because, we’re able to understand fully the characters arcs from episode one to Episode 10 or whatever it may be. As an artist, I’m able to build this whole character arc and measure my performance accordingly.

You must get tons of offers for roles. What draws you to a project these days?

At my core I just love stories. I’ve always loved stories. I think that’s what brought me into this business. I had a massive VHS collection when I was seven years old, of just different types of films. I’d stay in the house and me and my brothers would just go through films incessantly. So when I’m looking at what kind of characters to portray, ultimately, I look at the overall story. Is it something compelling? Is it something that excites me? Is it something that means something to the world and then an opportunity to play a character that challenges me? That allows me to learn something about myself and learn something about the world? Homecoming is really no different than that for me. It’s just an incredible opportunity to tell a story about veterans and their pasts. Then to be able to work with great artists, people have been watching my life – like the great Julia Robert, or in this season, Chris Cooper – it has afforded me the opportunity to work with a lot of special people.

I know you’ve mentioned wanting to direct before. What movies and directors were your favourite growing up?

One of the early films I remember watching was Reservoir Dogs. I was probably too young to be watching it at the time, but I’ve always loved Quentin [Tarantino]. I also love PT [Paul Thomas] Anderson, Steve McQueen and David O. Russell.  I have a long list of actors who have inspired me as well. When you look at Philip Seymour Hoffman, Denzel Washington, Leonardo DiCaprio; all these people have helped influence or shape the artist I am today.

What have you been watching in quarantine? Is there anything you’ve been diving into that you haven’t seen yet? Or rewatching old favourites?

Once we’re out of quarantine, what’s the first thing you want to do in Toronto?

I just want to go to Dundas Square with everybody else and pop fireworks. Just waiting on the day to celebrate like the Raptors won again.

What do you have coming up, projects-wise?

I have a ton of projects in the works, but the one that will be first up for me is a film called The Short and Tragic Life of Robert Peace, which Chiwetel Ejiofor is directing.

Winnie Harlow and Stephan James Are Our September 2019 Cover Stars!