Sofia Carson on Her New Netflix Movie 'Feel the Beat'

The actor-singer-dancer talks about being a role model and why she hates the phrase "strong female characters." 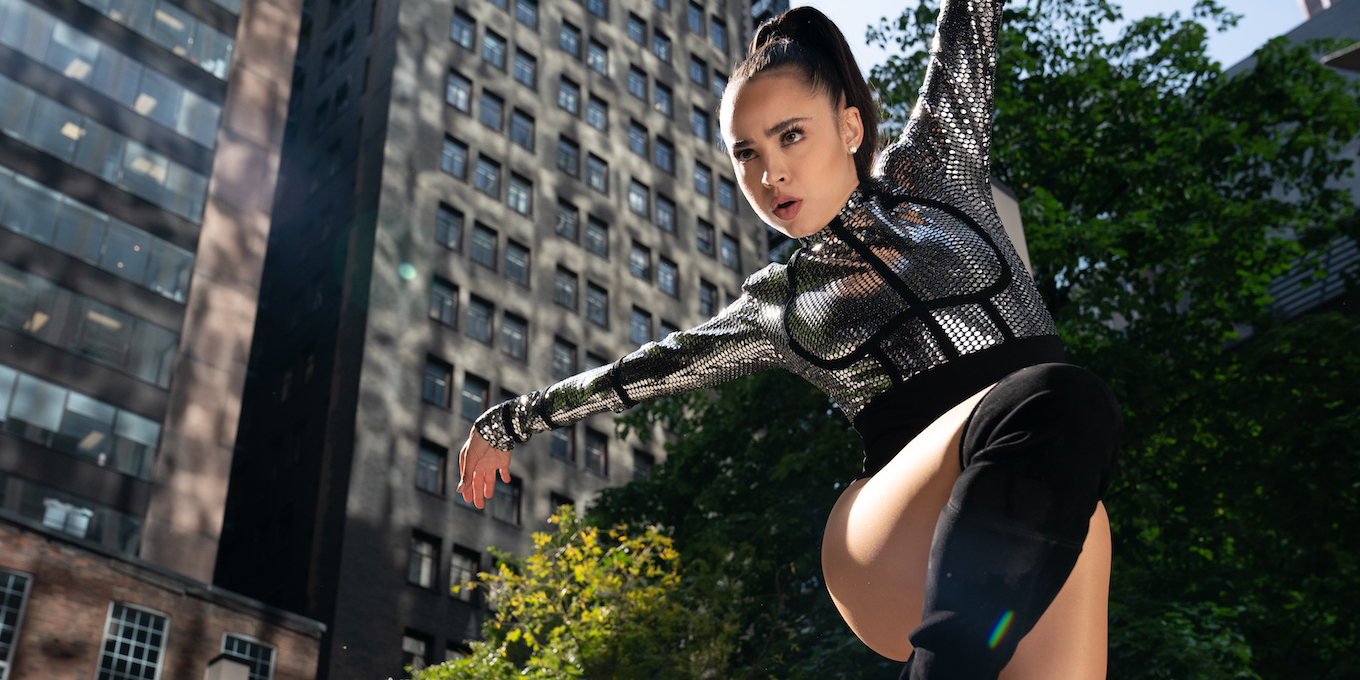 There’s a moment early on in Netflix’s feel-good dance comedy Feel the Beat that’s destined for memedom. Upset and disappointed after a career setback, protagonist April (Sofia Carson) heads to the local grocery in her small hometown for some snacks. Deciding she can’t wait until she’s home, she walks around taking huge, aggressive bites out of a block of cheese. It is, as one fan pointed out, a whole mood. “I love that moment so much, and I love that people gravitate towards it. When we’re feeling down, food is comforting,” Carson – who you’ll recognize from Disney’s Descendants franchise and Pretty Little Liars spinoff The Perfectionists – says with a laugh. “For April, it’s cheese. For me, it’s chocolate and popcorn. I love cheese too, so I’m right there with April. I feel like both cheese and chocolate have therapeutic relief.”

With Feel the Beat, which is streaming now, the actor-singer gets to return to her roots; the 27-year-old started dancing when she was just three years old. The movie follows April, an ambitious dancer who gets blacklisted from Broadway and kicked out of her NYC apartment. She returns home to Wisconsin, where she agrees to help prepare a group of young dancers for a competition – only when she realizes that one of the judges is a major player in the New York dance scene. We hopped on the phone with Carson to chat about the movie, being a role model and filming in Toronto.

Why Feel the Beat?

I was immediately drawn to the script because I feel exactly what April feels. I fell in love with dance when I was three years old. And dance was kind of my window into falling in love with art. It was the first time I felt like I was at home. When I was on stage, I felt free. That became my whole entire world. So April’s story is so vivid and real for me because I’ve lived it. It was real and personal.

I also loved the story that’s told by the young characters in our film. April realizes that it’s [their] quirks and imperfections that make them so beautiful. She learns from those girls, who never try to be anything else but who they are. They’re so unapologetically happy with being themselves. I loved that so many people would watch this film, young girls particularly, and hopefully, feel seen and learn that nobody has to be anything other than who they are.

You mentioned feeling at home on stage as a young dancer. Has that feeling followed you in front of the camera, or are they totally different experiences?

I think they’re different. When you’re on stage, you can’t help but lose yourself in that moment, in the lights, in the crowd. It’s an incredibly beautiful and liberating feeling. When you’re shooting a movie, it’s different. Or if I’m shooting one of my music videos, because I also get involved behind the camera and I want to get involved on the directorial side of things. It’s about finding a balance of performing in front of the camera and being honest and authentic, while also thinking about angles and things like that.

Have you always wanted to direct, or has that become a newer interest as you’ve developed your career?

I started to notice that when I was working on music videos, I loved being super hands-on with the shots and other creative [aspects]. After doing a take, I love watching it back and learning from what I did, changing it and talking to the director. I really love the behind the scenes of what it takes to bring a story to life. And after working with [Feel the Beat director Elissa Down] and seeing how the honesty of the film, I [became] obsessed. I would love to add directing to my resume.

What do you look for in a project?

Authenticity. [I want] a story that feels real to me, something that would allow someone in the world to feel seen. And the female characters. I hate the phrase “strong female characters” because there is no such thing as a weak woman. We have to stop saying things like that. But, at the very beginning of my career, before I’d even gotten a role, so many female characters would break my heart because they were so stereotypical and one-side. That’s changed so much, thankfully. There are so many more incredible roles, women directors and women being represented as multi-dimensional human beings. That’s what I loved about April, and it’s really important to me.

Thanks to your role in the Descendants movies, a lot of your fanbase is younger. How do you think about using your platform as a role-model figure?

It’s the most important role that I’ll ever play. I’m so lucky to have the platform and the voice that I do, and to be able to tell stories that impact a younger generation – whether that be with just a smile, or helping them feel accepted and loved. I also use my platform to educate on what I feel are important causes, from my work with UNICEF to what is the most important movement of our time, Black Lives Matter, and urging people to take this moment and get to the polls and vote. Throughout my career and travels, the most fulfilling feeling is meeting young women and men who tell me their story and that the things I’ve put out in the world [have helped them]. That means more to me than I’ll ever be able to express.

Usually, when people pursue a creative career as you have, they’re not thinking about becoming a role model for younger people. How have you adjusted to that role?

Evie [in Descendants] was my first movie role. It changed my life in so many ways. And she, and the film, became a phenomenon that impacted, and continues to impact, millions of people around the world, particularly young girls. I remember I was visiting a hospital once and a few of the kids were interview me. One young patient told me what Evie meant to her, how she felt beautiful and believed that beauty lies within. Hearing that from her mouth solidified the importance of everything that I do and say – whether it’s in a role I play or a song I write, a photo I take – impacts her and others just like her. I thought, “Wow, I’m really lucky.” I think from that moment on, it became the most important aspect of my career.

Feel the Beat was shot in Toronto. Where did you hang out when you weren’t working?

I miss Toronto with all my heart. I would give anything to go back. I was based right in downtown Toronto, across from TIFF. There was a Pilates studio nearby, and the restaurants on King Street were great. I also loved walking around Yorkville, and all of Toronto, really. We shot during the summer, so it was amazing to see how active everyone was. Everybody was outside. I would walk through the University of Toronto campus, went to parks. We really fell in love with Toronto.

The Half of It Is Only the Beginning for Alexxis Lemire