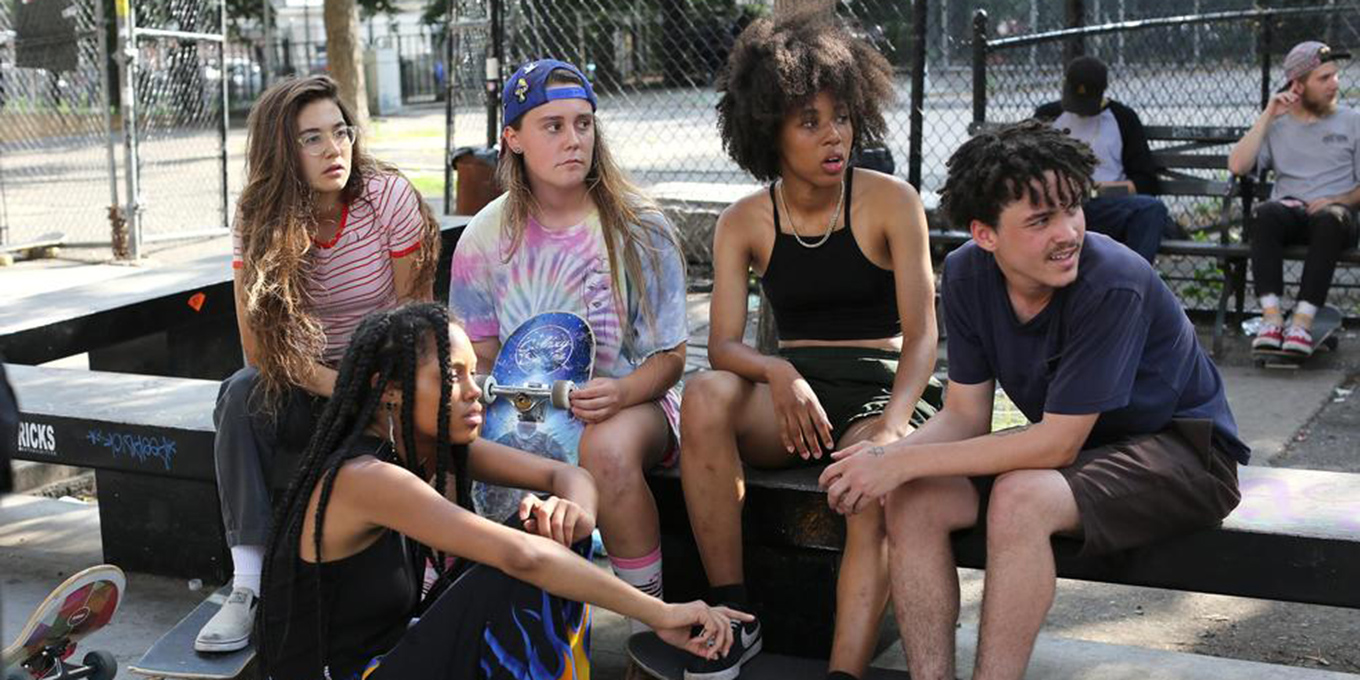 Filmmaker Crystal Moselle trusts her intuition. It’s what led her to approach a group of six siblings with waist-length hair walking down a street in New York City for a conversation that turned into the critically acclaimed documentary, The Wolfpack. It’s also what led her to befriend two teenage girls holding skateboards on a New York City subway train a few years ago.

The girl were members of a women’s skate collective called The Skate Kitchen, which would end up becoming the title of Moselle’s 2018 film, starring the girls as fictionalized versions of themselves. The Sundance festival favourite has been praised for its natural depiction of female friendships and the chemistry between the cast (none of the girls are trained actors).

The newest addition to the Skate Kitchen world is HBO’s Betty – a spin-off television show starring Nina Moran, Rachelle Vinberg, Dede Lovelace, Moonbear and Ajani Russell, who were all in the film. The charming series is a look at the crew’s lives – filled with drugs, sex and men who are still trying to be skate park gatekeepers – as they navigate the concrete jungle on their trusted skateboards.

We reached Moselle by phone in Brooklyn and chatted about how the new series was developed, the girls’ wardrobes and how it feels to have the New York-centric show be released during the pandemic.

I read that you met a couple of the cast members on the subway. For our readers who don’t know the story, can you talk a little bit about that initial meeting?

I met Nina [Moran] and Rachelle [Vinberg] in the subway [in New York City]. Nina was incredibly charismatic and I’m drawn to that sort of charisma and one-of-a-kind personalities. We became friends and did a short film together called That One Day for Miu Miu. Then we immediately had the opportunity to turn the short into a feature film, which HBO then checked out.

How soon after the release of Skate Kitchen did plans for Betty begin? Was a TV series something you always had in mind for the Skate Kitchen universe?

Plans for Betty began about a month after the release of Skate Kitchen. I wasn’t thinking of a TV series originally, although people who had watched the movie had said, ‘We want to know more about the other girls. We could live in that world forever.’ So to me that was an indication that it could become a series, but I wasn’t really thinking of it until HBO approached me.

Let’s talk about the title. It’s an obvious nod to the way “Betty” is used to refer to women in skate culture. How did you land on it?

I didn’t know at all that that’s what the title was going to be. We spent about two months trying to figure out what we were going to name it. We were frustrated, so I called my friend William Strobeck – he’s a director, he did all the recent Supreme videos – and he’s someone from the skate world that I like to chat with. I was like, ‘What do I name this show? I can’t think of a title.’ He was like, ‘Oh, you gotta name it Betty.’ At that point we just knew that was the one.

I imagine that recognition of girls’ skate culture was amplified after your film was released. What has the experience been like for you and your cast?

They started to gain a lot of attention on Instagram before the movie and the show were released, so it’s been gradual since then. These girls are so humble and they’re not relying on this to be their everything. They still have other interests and other things they’re doing.

What was your personal relationship to skateboarding like in the past and how has it changed?

I’ve always kind of been in the skateboarding scene. I hung out with a lot of skateboarders growing up and would skate around a bit. I never did tricks or anything though and I wasn’t very good. Personally, I’m too old at this point to to get into it because when you fall, your whole body hurts for days and days. [Laughs]

How did you approach making Betty for television vs. Skate Kitchen as a feature film?

The biggest difference was the writer’s room for Betty. Having a group of writers that had done a television show before was incredibly important for the process of what we were doing. I was very lucky to have a room of incredible writers that helped create the world and developed the story. Everything else felt very similar [to making Skate Kitchen]. We had rehearsals and it was a bit bigger of a production but not that much bigger.

Skate Kitchen mostly focused on Camille’s [Rachelle Vinberg] story. How did you develop the storyline for the other characters? Was it based on continued conversations with the cast, or was there stuff that didn’t work in the film that you wanted to use?

The girls are creative collaborators on the show, so they are consultants. I hang out with them so much and the little stories they tell me or things that happened become bigger stories in the show. It’s always this kind of ongoing dialogue and conversation of what we can bring to the show.

There’s a very raw and authentic feel to the show, just like the film. How scripted was it?

All the scenes were scripted and we knew each day exactly what we were going to shoot. I did let the girls go off script and do their own thing quite often, though. When they take it into their own hands, it becomes more theirs.

I know the girls do all their own stunts. Is there a sort of choreography you like to have planned out before you shoot skating scenes?

I wouldn’t say it’s choreography, but we would say, ‘We’re going to skate down this street now,’ or something like that. Sometimes they would figure stuff out with our skateboard cinematographer, Joe, and they would create plans for what they wanted to do. I let them do that since it’s a very niche process and sometimes we would be confined in a certain area.

Were there any challenges in filming in the city? There are tons of amazing shots of the girls weaving through traffic.

Not really – I’ve been shooting in New York for so many years and the connection to the streets in a lot of the work that I’ve done is really just documentary work, which involves just figuring things out. It felt very much like riding a bike: you just weave in and out of traffic and you just trust it and feel it. It’s very intuitive.

New York City is such an important part of Betty and the vibrance of the girls skating through different boroughs is really powerful, especially right now. How does it feel to have it premiere during this unprecedented time?

It’s wild because the streets are like an extension of our lives in New York. We all live in these apartments that are generally small spaces, so the streets, the city, the asphalt, the parks; they are a part of our existence here. While we’re confined to our homes I think it’s pretty nice that you can explore the streets in the show. The way that I film and the way that I want people to experience the show is like you’re there with them. You’re experiencing it with the girls. You’re in these parks and you’re not just an observer – you’re participating as well. It’s a difficult time we’re all going through but I hope that people can escape a bit with this show.

The show also really dives into personal – and, at times, difficult –subjects, like queerness and sexual assault, in a very nuanced way. Can you talk a little bit about your decision to include those aspects?

My generation grew up thinking that the way that we are treated by men is something that you have to deal with. What I learned from their [the cast’s] generation is you don’t have to deal with that. You actually can fight those things and not stand for it. With the #MeToo story, the idea that emerged was what happens when somebody you know gets MeToo’d. It’s discussing what the complexities of the situations and the complexities of what #MeToo allegations are. We’ve stepped into a new place where women are taking more ownership of their own bodies, which is ludicrous to say out loud, but for so long we haven’t. It’s time to actually explore the subtleties and micro-aggressions and have claim and ownership over ourselves.

Switching gears a bit: the style in the show is excellent and seems very true to each character’s personality. What was the styling process like?

It’s all inspired by the girls. The girls worked with Camille, our wardrobe and costume designer, and just created versions of themselves. It’s all clothes that they would wear in real life.

Do you have a character whose style you identify with the most?

Probably a mix between Indigo and Janay.

Is there anything else in the works we can look forward to seeing from you?

We have ideas for season two, so if they green light it we will move forward. I’m also making a documentary about a robot named Sophia and developing a film about my father’s time working in a mental hospital in the ’70s.