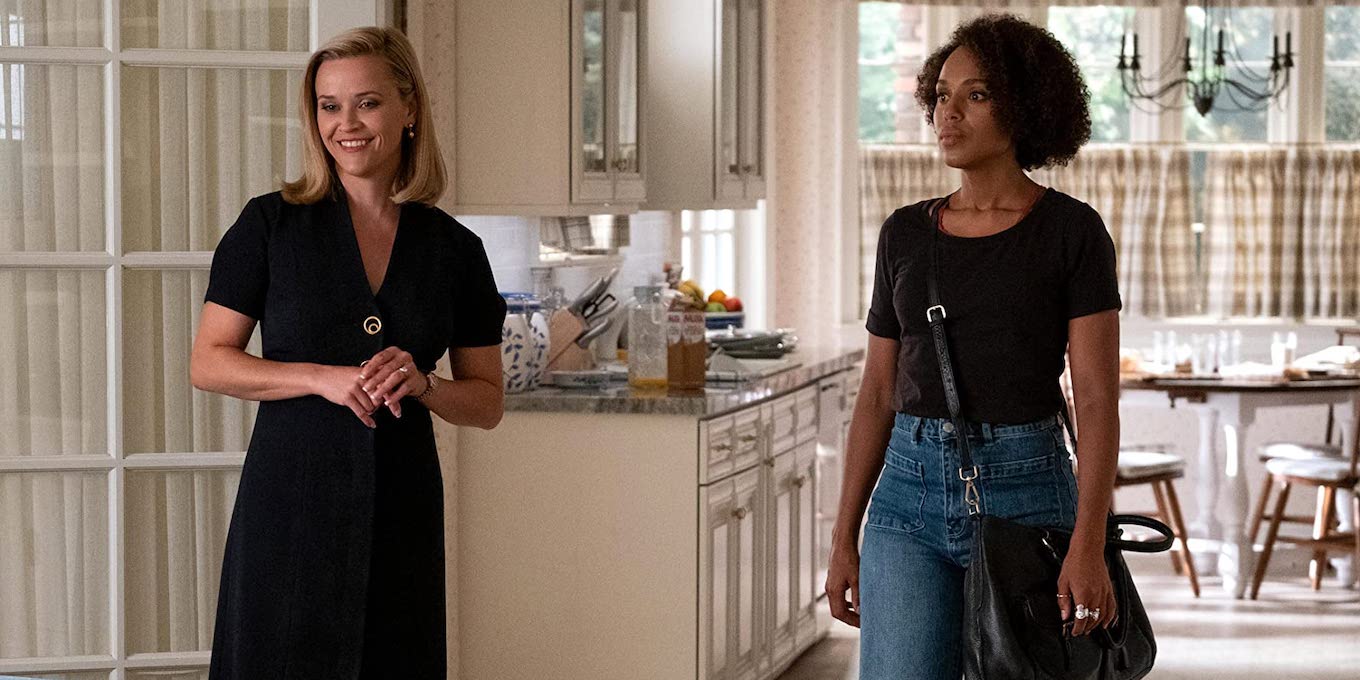 For Reese Witherspoon and Kerry Washington, one of (many) draws of working on Little Fires Everywhere was clear: working with a powerful group of women to tell to examine the different ways women move through life. “It’s important that we’re telling stories that our daughters, and other people’s daughters, are going to grow up and see a better, more accurate reflection of what the female experience is,” Witherspoon says during a Zoom roundtable with Washington. “I was just talking to my daughter [Ava] this morning about what she sees on film and how she’s seeing more female storytellers, directors and screenwriters. And she feels more emboldened to speak up because she’s hearing more women finally being honest about their experiences.”

Witherspoon and Washington both produce and star in the adaptation of Celeste Ng‘s bestselling novel of the same name, now streaming in Canada on Amazon Prime Video. The pair star as Elena and Mia, two mothers from different socioeconomic backgrounds who become intertwined in each other’s lives. We joined celebs on the roundtable to chat about making the show, motherhood and why telling diverse stories about women is so important.

On why they wanted to adapt Little Fires Everywhere

Reese Witherspoon: “The theme of motherhood definitely drew me to the material – getting to explore different kinds of mothering in one piece was really appealing.  Also, getting to work with Kerry on this project was a beautiful experience. I feel grateful to have a partner like her and to be able to have [tough] conversations. It’s been a lot on my mind [recently], with everything happening here in America and the discussions we’re having around race and how people are treated. One thing Kerry said to me at the beginning of our creative journey was that we have to be able to have difficult conversations with each other, and I think about how little that is possible when people stop talking and get quiet. To be able to have this diverse group of women having conversations in this safe space was really beautiful.

Kerry Washington: Yeah. We learned early on that in order for that to be true and to have those tough conversations, we had to be willing to say the wrong things at times and [realize] we weren’t going to do it perfectly. That’s one of the things I really love about [Little Fires Everywhere]. These characters are very, very imperfect and are often saying what we, from our judgemental standpoints, easily say is wrong. But to have it out in the open means we get to talk about it and process it and acknowledge it. And that feels more important than staying in our closed little closets of fear.

On the challenge of getting into character

KW: I think for both of us, this is the kind of work we’d never done before, which was inspiring but also challenging. What made it doable for me was to be partnered with Reese. You can be nervous about the fight, but when you step into the ring and your partner is as proficient and committed and courageous as Reese is, you just feed off of each other. Anything that felt scary felt so much more possible because we were in it together, even though our characters were enemies. Behind the scenes, we were sisters making sure that we could do the dance.

RW: This was definitely one of the hardest things I’ve ever played. I know Kerry struggled [with this] too. These characters aren’t good or bad. There’s a whole spectrum of behaviour that is not justifiable, not okay. But in creating characters that are deeply flawed, you hope that people will go on the journey with you. We wanted so badly for people to make it to the end [of the series] to understand that their character flaws are human. No one is the hero of the story. Every motherhood journey has its own struggle and women deserve the space to be seen and heard.

On how the show made them think about motherhood

KW: It actually made me reflect on my mother’s role as a mother. [On the show], we’re playing moms of teenagers in the ’90s, and we were teenagers in the ’90s. So that made me think about my mother’s experience and what she was going through, and that provided context for who she is. And in some ways, of course, that impact how I parent – a lot of what I do is figuring out what I was taught subconsciously by my mother.

RW: [Little Fires Everywhere made me think about] many of my blindspots. My daughter’s like, “Mom, I’ve learned so much from you.” And I said, “Ava, I’m learning so much every day.” I am a 44-year-old woman who is humbled by what I don’t know and what I learn from the perspectives that I don’t walk through. I learned so much on this show about things that were told to me, about sexuality and race and the immigrant experience, that were told to me when I was a little girl that are not true. I learned so much by feeling safe to talk to Kerry about the things I heard growing up and letting all that shame and embarrassment about not knowing just exist.

On the importance of telling stories about women

KW: There should never have been a moment where we were forced into a false identity. As women, we’ve spent so much time, historically, being told what we’re supposed to look like, how we’re supposed to act and behave. We’ve been taught to be good and nice as opposed to being taught to be authentic. Now, as producers, Reese and I have the opportunity to tell stories about women’s authenticity – about who we really are and what we’re really going through. And that is so liberating because we can reject these false ideas that are put on us.

RW: If we don’t have that genuine expression of the female experience, women will continue to be silenced and not live up to their full potential and power. So you hope that, by creating television shows about flawed and real women whose lives matter, people watch it and realize it’s a moment for them to do [the same]. I think about this a lot, about the young people who will see [our work] and what they will take away from it.

The Conversation About Racism All Canadians Need to Hear