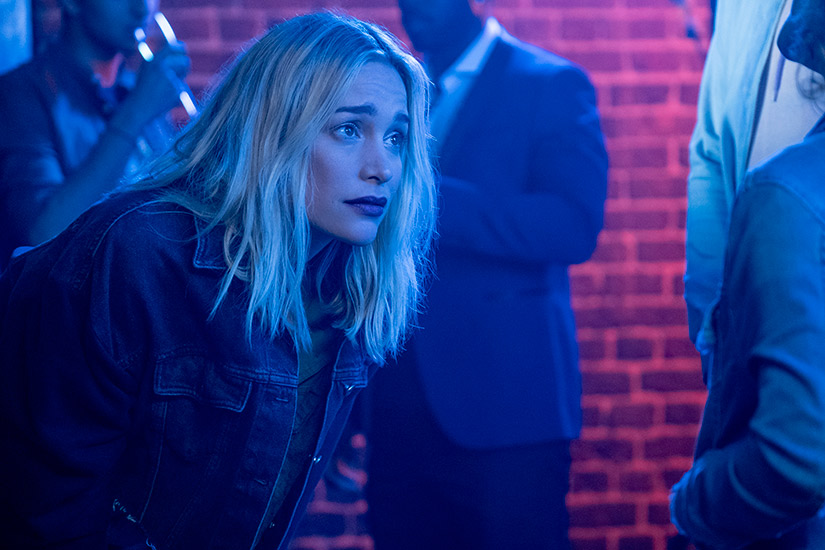 For Piper Perabo, signing onto Netflix’s DJ-turned-nanny sitcom Turn Up Charlie was a no-brainer for a few reasons. First, it was co-created and stars Idris Elba (she loves his British crime drama Luther), which…duh. There’s also the fact that she thinks her character is so relatable. And the third? “When I read I was going to play a DJ I was so happy because so often I play characters who have to wear really high heels and at the end of the day your feet hurt so bad,” she says, laughing. “I was like, ‘YES!’ DJs wear sneakers and tracksuits! [My character] has such cool style, but it’s so comfortable. It was heaven.”

In Turn Up Charlie, Perabo stars as Sara, a famous American DJ who moves to London with her British actor husband David and their daughter Gabby. They both have very busy careers and Gabby is quite demanding (that’s putting it kindly), so they ask David’s childhood best friend Charlie (Elba), a struggling aspiring DJ, to be Gabby’s nanny. We caught up with Perabo to chat about the show (which hits Netflix last Friday), her activism and a possible Coyote Ugly sequel.

What can you tell me about Sara, your Turn Up Charlie character?

She’s a powerful woman who’s working full time and trying to manage a family, and doing a not that great of a job. That’s a really modern, relatable story. I can relate to the idea of trying to balance a really overwhelming, full-time job and having family responsibilities at the same time. Everybody has some version of that, and I like that it’s kind of the aspirational version, because she’s married to a movie star and they live in London.

I have to ask, because it’ll be the question on everyone’s mind: what was it like working with Idris Elba?

He is so cool. I have to say, in real life, he’s even more handsome than he is on screen. At the first rehearsal, it was a little hard to concentrate, staring at him. [Laughs] You’re just like, “Wow, even your ears are beautiful.” It was honestly kind of distracting. I mean, anyone would get distracted. It’s just insane. But he’s a really positive, hard-working, kind person, so you sort of quickly get over how handsome he is. As an actor he’s very present, and that pulls you into the work.

Activism has become such a huge part of who you are now. Why has it become so important to you to speak out about causes you care about?

I’m really concerned about the direction that our country is going in, and I want to help get it going in the direction that I feel is better. One of the things that I can offer is my platform. Because of my job, I have this platform on social media; what I can offer is this megaphone that I have. And so I’m trying to use that to help make the change that I want to see in the world.

It’s been almost 19 years since your breakout movie, Coyote Ugly, came out. It’s still a movie that people love so much. Why do you think it’s had such a lasting effect?

I don’t know! It’s hard to be objective about it, because it was my first big movie. It still kind of feels like a personal growing experience, for me. Part of what’s relatable about Coyote Ugly is that it’s about having a dream and working really hard just to get your shot. A lot of people can relate to that—a lot of women these days can relate to that.

I know Tyra Banks has said she wants to do a sequel. Do you think it’ll ever happen?

She sent me a message, like, “We’re doing it!” I responded, “Tyra do whatever you want to do!” She’s like, “I don’t care! We’re doing it!” [Laughs] I don’t know! I mean, we’d need to have a script, obviously—we’d need more than just me and Tyra. There’s a couple of pieces missing. But I thought it was so cool that Tyra was so excited.

And before I let you go, what’s one thing you’re really into at the moment?

I’m into the Fenty Beauty primer. I was at a protest march in Washington D.C. last summer and it was really hot. I was next to this woman and this female police officer came up to us—we weren’t doing anything, we were within our rights to be protesting, but we wanted to keep it cool. The police officer comes up to us, and my friend I’m standing next to was a Muslim woman wearing a hijab, so I was thinking to myself, “Please [to the officer], let this stay polite.” And the police officer says, “Your skin looks so good! What do you use?” And my friend goes, “Oh, I use that Fenty Beauty primer. It really makes your foundation stay in place.” And then the cop said thanks and kept walking along the lines of the protest. When I got home to New York, I went to Sephora and bought that exact Fenty Beauty primer. [Laughs] I want to even be looking good during a protest march.

Exactly! This is why women can rule the world. Like, the police officer can walk up to the protesters and be like, “Your skin looks amazing,” but we’re still in the middle of things and getting a lot done.