Never Have I Ever's Maitreyi Ramakrishnan Is on the Rise 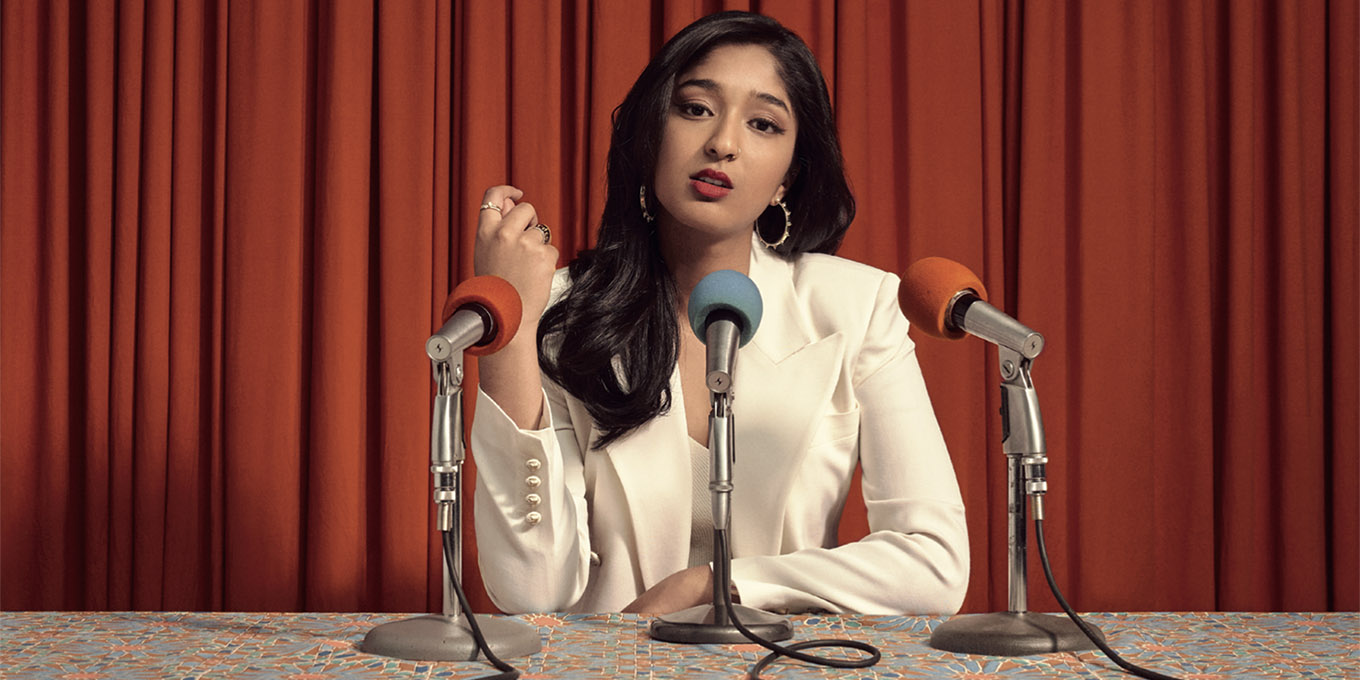 Maitreyi Ramakrishnan has the kind of Hollywood breakout story that you usually only see in the movies. The now 19-year- old Tamil-Canadian was in her last year of high school in her hometown of Mississauga, Ont., when a friend saw an open casting call for a young South Asian actor to play the lead in a new Netflix series. The show also happened to be created by Mindy Kaling and was inspired by her own childhood and teenage years. Knowing that this was the perfect part for her, Ramakrishnan decided to take a chance. She was told to submit a self-tape, so first she had to look up what a self-tape actually is. Then, with the help of her friend, she shot her audition in her school library and sent it off. A few more self-tapes and a couple of trips to Los Angeles later, Ramakrishnan landed the role, beating out 15,000 other hopefuls and winning the actor lottery. The prize was playing 15-year-old Devi Vishwakumar in last summer’s coming-of-age hit series Never Have I Ever, the second season of which just premiered in July.

“I think acting happened by chance, because in high school I only did plays for something to do after school,” says Ramakrishnan over Zoom from her family home in Mississauga. “I wasn’t going to be on a sports team,” she adds with a laugh.

Ramakrishnan plays an awkward, endearing and incredibly funny first-generation Indian-American in the series, and in real life, this confident, well-spoken young woman is even more magnetic and hilarious. It’s easy to recognize what Kaling saw in the talented teen. She has never taken an improv or acting class, yet her jokes land, her humour is smart and self-aware and her comedic timing is spot-on. When I bring this up, she smiles and nods. “You know what’s really sad?” she says. “I didn’t do anything! I watched The Office 15 times—I love Michael Scott. I literally live in a world where I think I’m as lovable as he is. That’s basically it.”

This love is fitting since Kaling not only starred in The Office but was also one of its writers. Ramakrishnan was introduced to Kaling (the first famous person she’d ever met) when she was flown to L.A. to audition, and since then the two have formed a lasting friendship. “I absolutely adore Mindy,” says Ramakrishnan. “She’s one of the very few actors representing South Asians in Western media, and I am very grateful to her for being such a pioneer. Of course, she’s a sick, dope-ass boss, but she’s also a really good friend. If I ever need anything, I know I can text her.”

It helps to have someone like Kaling in your corner, especially when you’re navigating a quick rise to fame with no previous experience in the industry while also representing an Indian-American teenager—a character that’s unfortunately not often portrayed in Hollywood. The reaction to Never Have I Ever has been overwhelmingly positive, with a lot of fans telling Ramakrishnan that they finally feel seen.

“One of the funniest responses I got was a fan saying that every time they watch the show, they think Devi is going to leave the screen—but she’s in almost every scene,” she says. “We’re used to Asian or South Asian minority-sidekick characters coming in for a quirky moment and then leaving.”

“At first, i put pressure on myself to represent everyone, and then i realized that i’m one girl, i’m one story—i’m only 19 years’ worth of a story!”

This visibility has put a lot of pressure on the young actor, who has been trying to find her footing throughout this intense experience of being thrust into the spotlight. Luckily, Ramakrishnan has her family to support her, and she spent her summer at home with them, just like any other 19-year-old. But her life is still very far from normal.

“There’s been a lot of advice and a lot of growth,” she says. “At first, I put pressure on myself to represent everyone, and then I realized that I’m one girl, I’m one story—I’m only 19 years’ worth of a story! How can I represent everyone? That was a big breakthrough moment for me.”

Part of the appeal of the series—and one of the reasons it has garnered so much praise—is that the characters are so relatable. Even though the show is about the life of a teenager, Devi’s experiences are universal. The awkwardness, the crushes, the embarrassment and all those cringe-worthy moments can be appreciated by everyone. Plus, it’s incredibly funny and narrated by John McEnroe, who plays himself and doesn’t hold back with his opinions on the characters’ actions.

“To call this a YA [young adult] show does it a disservice,” says Ramakrishnan. “The fan base is not just a younger audience—it’s all across the board. Mindy and the team do a great job of writing believable moments. You feel yourself there. You’re not cringing at Devi—you’re cringing with her because you’ve been there.”

With season two of Never Have I Ever under her belt and recently confirmed season three, Ramakrishnan is gearing up for her first big-screen role, playing Lizzie Bennet in Netflix’s The Netherfield Girls, a modern adaptation of Jane Austen’s Pride and Prejudice. But until then, she’s just looking forward to being able to do what she enjoys in life again, which right now means two things: “Amusement parks and dance parties,” she says with a smile.

A post shared by Never Have I Ever (@neverhaveiever)

Keeping it Real: a Q&A With Mare of Easttown’s Kate Winslet
Annie Murphy Is Flying Solo
Canadian Women Made History at the Tokyo Olympics