Meet the host of the new fashion series Stitched 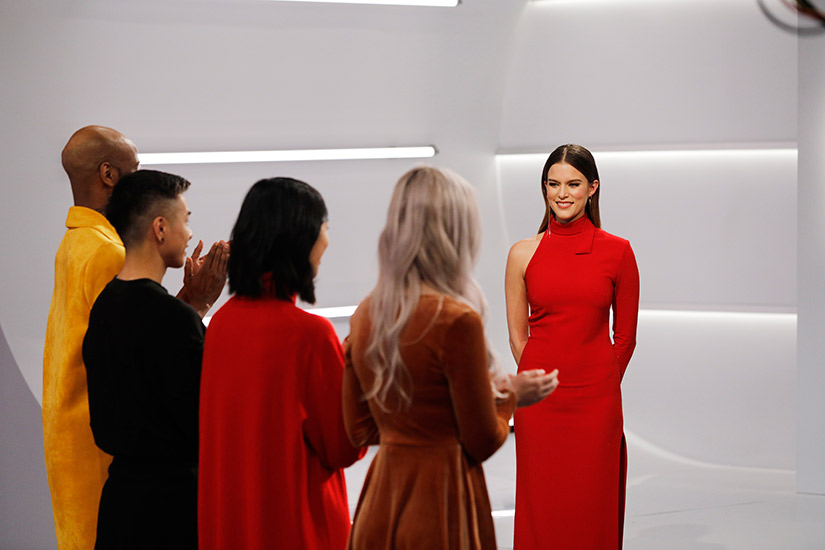 Turns out sometimes it does pay to listen to your parents—at least it did for Kim Cloutier. She was a student in Montreal when her photographer dad suggested she try modelling. Pretty soon, she was starring in the fashion magazines she loved flipping through, with editorials in publications from Cosmopolitan (UK) to ELLE Spain and ELLE Canada. Now, between cover shoots and campaigns with brands including Simons and Lands’ End, the Brooklyn-based model is taking over your television as the host of fashion series Stitched, which premieres on September 9, and co-stars ELLE Canada editor-in-chief Vanessa Craft and style expert Joe Zee.

On with the show “Every episode, there are new designers and a new winner. I think people are going to like seeing the surprise of each creation. I got emotional once. There was a designer who I feel has a promising career, but we had to let her go. The thing is, when you’re filming, you don’t say goodbye just once; you have to do it at different angles. I had to say goodbye to her the most times, and I was like, ‘No, you guys make me want to cry; I don’t want to do it again!’”

Team bonding “There was a lot of downtime because the designers had to create their garments, so we [Cloutier and judges style expert Joe Zee and ELLE Canada editor-in-chief Vanessa Craft] ended up getting a TV and we’d watch [trashy movies like] Showgirls. On  our days off, we’d all go to a dance class at the Underground in Toronto and blow off some steam dancing to Beyoncé or Britney Spears and then grab sushi.”

Skin deep “I could spend all my money on skincare. I use a Caudalie oil at night. During the day, I just wear mascara and lip balm. I make my own natural lip balm, but I also love Fresh tinted lip balms.”

Favourite fashion “Alexander Wang is my go-to. I’m also into oversized dresses. My favourite is Stella McCartney. Mackage does a great moto jacket, so that’s going to be my hero piece this fall.”