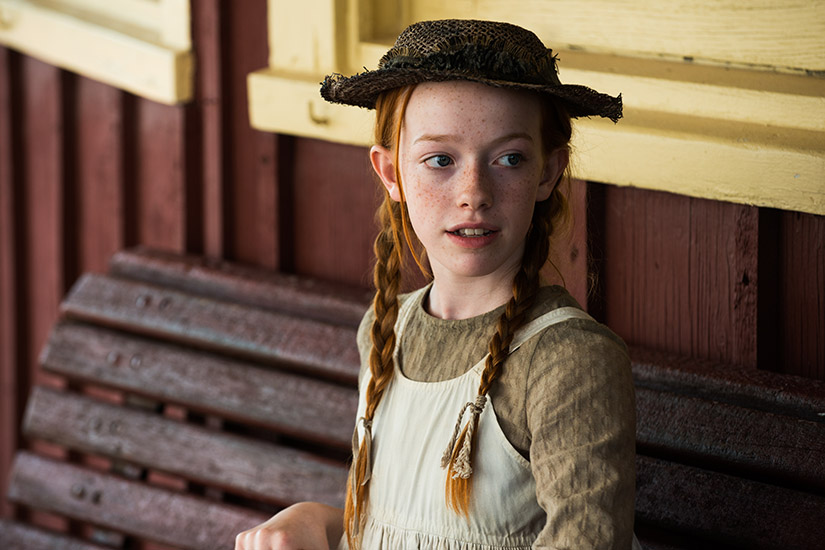 Here’s a pro-tip: To really enjoy the new CBC adaptation of Anne of Green Gables, premiering Sunday, it’s best to forget everything you know, put that beloved 1980’s version out of your mind, and surrender to the particular charms of this latest reimagining of a Canadian classic.

At the centre of this transporting, dreamy miniseries is Amybeth McNulty, the tween who beat out 1,800 other actresses to play Anne Shirley for a new generation—and a sceptical crowd of older, die-hard Anne fans. It’s no spoiler to say she shines as a believably verbose, quirky in a not-annoying-way Anne, doing a commendable job of inhabiting both the joyful, romanticly exuberant bits (“Lake of Shining Waters! White Way of Delight!”) of Anne we expect, and the darker contours this version explores in the orphan’s story.

We got the chance to chat with the blonde-in-real-life 15 year old—in Anne’s actual bedroom on the show’s Toronto set—about getting into character, costume, and what happens when you have a growth spurt halfway through filming.

ELLE Canada: So where were you when you found out you got the part?

Amybeth McNulty: I was in my living room. We have a dining room connected and it’s glass door so you can see through and we have the phone in there. The phone rang, and I’d been waiting for two weeks because I knew by this point I was in the final two. My nan answered and she was on the phone for a while. Me and my granddad who were still in the living were just kind of waiting going, “is this the call?” and “is this them?” and “it might not be them it could be someone else.” We just couldn’t tell by her facial expression. Eventually she put down the phone and she looked really sad so I was like all right, okay, I don’t have it. Then she came in and she just went well, “they want you!” and I just started sobbing and crying and screaming and running up and down the hallway. That was the 21st of August. I can’t believe I still remember that.

EC: It’s a big moment in your life!

AM: It was crazy! I don’t think I’ll ever forget that.

EC: Did you do any prep for this role?

AM: It didn’t really take much to put myself in her shoes. We’re very similar. She may be 13 and I’m 15, but we’re very similar in age and we both love nature and the outdoors, we like standing up for our political beliefs and what we believe in. She’s a feminist, I’m a feminist. Of course I didn’t go through all the things that she went through so that did take a little bit for me to be like, okay, what would that really be like?

EC: This adaptation explores some of the abuse that Anne suffered when she was working for families before she was adopted by Mathew and Marilla.

AM: It does go over that subject a little bit more in the flashbacks. They aren’t extremely graphic, but they are brutally honest. She got beat, she got slapped, she got called names,  and there was very, very little love for her and she was just trying her best. She went from home to home to asylum to orphanage all with strangers that she didn’t know. There was no kind of family there, which is terrible to think about, but it’s relevant for a lot of people today as well. My great grandmother was actually hired out as a slave at 11 years old, so there was a way I could definitely relate to telling her side of her story that maybe she didn’t get to tell anybody. I definitely brought a sense of her life in Ireland and to this one.

ELLE Canada: What was your favourite day on set?

AM: Ohhhh God! You can’t ask me that! But, can I just say the slate scene?

SL: Where she breaks the slate over Gilbert Blythe’s head? Classic!

AM: It was so much fun. And Lucas, who plays Gilbert, he was so lovely. But I mean I got to hit him with that slate probably over 40 times. It was like a little foam slate, and obviously it wasn’t real. He just kept saying, “You need to hit me harder, like genuinely hurt me.” And I was like, “Lucas, I can’t do this!” I loved getting to scream a little bit.

EC: What was it like when you first got into Anne’s costume?

AM: My first costume was this horrific orphanage dress. It’s terribly ugly and it’s got tears in it, it’s brown and it’s too small for Anne, so it was tight on me. I hated it and I loved it so much. I was like, “it’s so awful, but it’s so perfect.” And the boots are my favourite. I’ve grown two foot sizes and four inches during the shoot—I went through this whole growth spurt, finally—but these boots even though they’ve changed now they’re still so beautiful and they’re just these brown, plain boots. They’re very different to the girls’ ones in the school, you’ll notice the girls where quite petite black ones and all the boys are the same as Anne’s and she doesn’t know she’s wearing boys boots or anything. But no, they definitely helped me literally step into being Anne, which was great.

EC: Did your growth spurt cause any issues with filming?

AM: Surprisingly not. They just gave me the stunt double’s dress that was slightly bigger. But at the end of shooting, we had to go back and shoot a bit in episode 3. Obviously I’ve grown about 3 inches at this point and my hair had gotten quite a bit longer.I had to stand next to Dalila, who plays Diana Berry, in the scene. When we first met we were the same height and now I’m easily 4 inches taller than her, so it was crazy standing next to her. Most of the time I was off camera so it was fine because it was mainly for other coverage on the girls, but me and Dalila were just so shocked at how much I had grown. I was like, “Are you shrinking?” and she has was like, “No, you’re growing. Shut up.”