The Oxford-educated actor on her filmmaking ventures and the importance of representation in rom-coms. 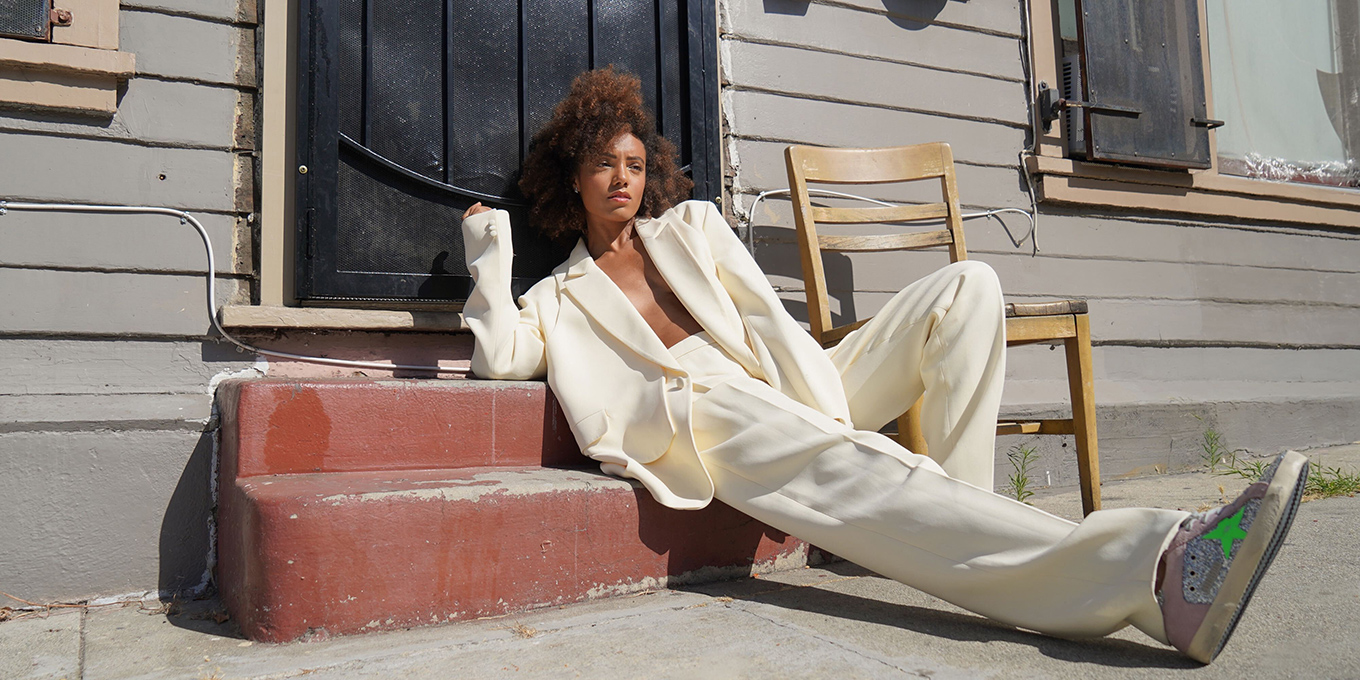 The sequel to the wildly popular Netflix original rom-com, The Kissing Booth, hit the streaming service on Friday, and with it came a new addition to the cast: the aspirational Chloe, played by London-born actor Maisie Richardson-Sellers.

It’s Richardson-Seller’s first rom-com role, but you wouldn’t know that based on how easily she fits in with The Kissing Booth mainstays Elle (Joey King), Lee (Joel Courtney) and Jacob Elordi (Noah). You might recognize her from roles in DC’s Legends of Tomorrow and The Originals – or, if you happened to attend Oxford University in the early 2010s, you may have seen her acting and directing theatre productions on campus.

Richardson-Sellers is currently far from her hometown of London, self-isolating in Los Angeles with her partner and puppy. We called the actor to discuss the complexities of rom-com characters, her journey from Oxford University to Hollywood and how she plans to make positive changes for a more inclusive entertainment industry.

What attracted you to the role of Chloe?

What I love about her is that she is a fiercely independent, vivacious, warm, quick-witted and very intelligent woman. I love seeing women in that way and I also don’t think we see enough diverse representation within the YA rom-com genre, so it really excited me, the idea of this figure. At the end of the day she’s very true to herself; she’s very honest, and people around her interpret and misinterpret her, but she herself has really strong morals and integrity. Also, to go to South Africa, which I love, it was such an exciting project for me.

How do you relate to her?

We’re both very outspoken and we’ll do whatever we can to protect and to uplift the ones that we love. I went to Oxford and she went to Harvard, so I definitely think that love of education and knowledge is similar. I think I’m more of a weirdo than her, she’s a little cooler than me. She also has a better sense of style than me, I’m very low maintenance, but I think at the heart of it, we share that fire and love inside us.

Chloe at first glance seems like a character that viewers might want to dislike, but she proves to be charming and smart. How did you balance that multi-dimensionality?

Yeah, it was really fun to play with that, because we had to be really careful about how we portray her. At the end of the day, I kept coming back to just being truthful. She is a very affectionate, very loving person. She’s cheeky and playful, and if I did, if I did play that honestly and thoroughly then you can understand why someone might be threatened. by her, but her attention still stay true to. It was fun to challenge that male-versus-female stereotype that we often see within rom-coms especially, and to load you into thinking about what was going to happen, and then to sort of flip it on its head. And so many people really look at their own lives and to know that verismo friendship taps on people, and it can be for fun, it doesn’t always have to be as thought or something more. But I really hope the especially the younger generation, see that sort of lead into those inter gender relationships for themselves

Do you have any favourite memories from filming in South Africa?

I went to a three day safari in Port Elizabeth, which was amazing; we saw lions and elephants and giraffes. We climbed mountains together, like Lion’s Head and Table Mountain. We would do endless tasting menus; we just lived the high life while we were there. We spent so much time together offset and it really created that family feel when you’re spending four months in a different country with each other. The highs and the lows, everything is very intimate.

What do you hope viewers will take away from the second film?

I really hope that they will see that individualism and quirks and being different can be celebrated and that those unique traits that you have are what makes you special and what make you shine the brightest. Elle is not a conventional character as a lead – she’s not a mean girl, she’s just really herself. I think we need a lot more of that in the world right now.

This is your first role in a rom-com. What are your favourite romantic comedies?

It’s funny because I didn’t grow up with a TV, so I’m so new to it. My partner has actually been sitting down and making me watch all the classics. I love Sixteen Candles, The Breakfast Club, Ferris Bueller’s Day Off… I just saw Bring It On for the first time a few months ago and loved it.

Let’s talk a little about your career journey. How did you get into acting?

My parents are both actors, so I grew up around the theatre as well as backstage watching rehearsals. I also just loved the world – I loved the use of art as a tool for communication and to challenge conceptions and assumptions and prejudices. I’ve always been passionate about theatre especially. My parents recommended that I get a degree to have an option because of how hard acting can be and so I wanted a degree that interested me the most, which was in anthropology and archaeology. My agent happened to be at a play I did at Oxford… I got a call and was asked if I had ever thought about acting, and said, ‘funnily enough I have,’ and from there things just took off. It was a lot of luck and chance, so I’m so grateful for that encounter.

How did studying anthropology and archaeology inform your acting process?

For me anthropology is the history of culture and the diversity of individuals throughout history. To be able to study everything from Amazonian tribes to Southeast Asia, to Chinese medicine, I think it just really informs me when I jump into different bodies and different experiences as my characters.

As an actor, how do you prepare for a role onstage vs. on screen?

With stage, a lot more of the preparation is collaborative, because you have the rehearsal process, which I love. Whereas with screen, you’re doing all of that preparation alone, which is a shame sometimes. When I’m doing any role, my first thing is finding out the core of who they are. What are their fears? What are their biggest regrets? What are their dreams? What are the aspirations? What challenges them? What annoys them. I create the fully fleshed-out individuals with a whole backstory. So that when it comes time to be them, I can react organically as them without having to think about it because I know them so well.

Do you find it easy to separate yourself from the character once you’re off-stage or off-set?

I’ve never had a problem with that. I have my tools and my process – a big thing for me is music and I always have a playlist for each character. It’s so complete and once I put the costume on and the makeup on and I step out there without all the details, it’s easy to sort of slip back into me. I do think there’s a piece of each character that stays with me. I try to take my favourite piece of each one and learn from them and try to embrace that in my everyday life.

What kind of music did you have on your Chloe playlist?

Her dad is a diplomat so she has lived everywhere and travelled the world. There’s a lot of West African music and I really tried make it more of a cultural experience.

Was there a film or play that stuck with you as a kid that inspired you to pursue performance?

There’s a play called For Coloured Girls Who Have Considered Suicide When The Rainbow is Enuf by Ntozake Shange. I read it when I was about 15 years old and it just struck me. It looks at the diversity and similarities of the Black female experience across America. It’s so haunting and beautiful and tragic and inspiring and uplifting, it covers the whole emotional spectrum. I actually ended up putting it on and directing it at Oxford, it was the first play that I directed and I also acted in it. Everywhere I go, I have a copy of that play with me.

The Kissing Booth 3 has just been announced! Anything you can share about that?

It’s bigger and better than ever. It was great because it shows that period of time that very precious last summer between going from high school to university and you know, everyone’s being challenged because they know that they are going to have to diverge and so it’s a really heightened time. There will be tons of entertainment, Chloe and Marco will be back again so obviously the pot is stirred.

How have you been keeping creatively fulfilled over the past few months?

I finally have time to do work on the projects that I have been wanting to create, but sort of put on the back burner while I’ve been filming other things. I’ve used this time to really flesh out my production company primarily, which is called Bareface Productions. It’s going to be launching this year –  specializes in telling narratives by and about marginalized communities and LGBTQ+ individuals, whereby the people going in front of the camera also are able to come behind the camera, telling and creating the story through every stage. It’s been a good time for writing and focusing on that, and to connect with other creatives around the world in order to start this story process.

How did you develop the idea for the company? Was it something you were thinking about for quite a while?

I’d been thinking about for over two years now, maybe because of my experiences within the industry and seeing the lack of complex, positive, diverse representation in front of the camera. Often when you do get [that representation], sadly, the representation is not always there behind the camera, with who is actually telling and creating and funding the stories. Often you miss out on some of the nuance and the complexity of these stories that you can only really get from experience. That was the starting initiative and through all my travels I’ve met so many fantastic creatives and people with just stories that you wouldn’t even be able to make up. They also wanted to be able to create a platform where we could share resources and contacts and uplift other minority filmmakers as well.

Watch the New Trailer for ‘The Kissing Booth 2’

Malia Baker’s Not Afraid To Use Her Voice, On- and Off-Screen

Netflix’s ‘Cursed’ Puts a New Spin on a Familiar Tale

Rosa Park has curated a modern retreat in historical Bath.