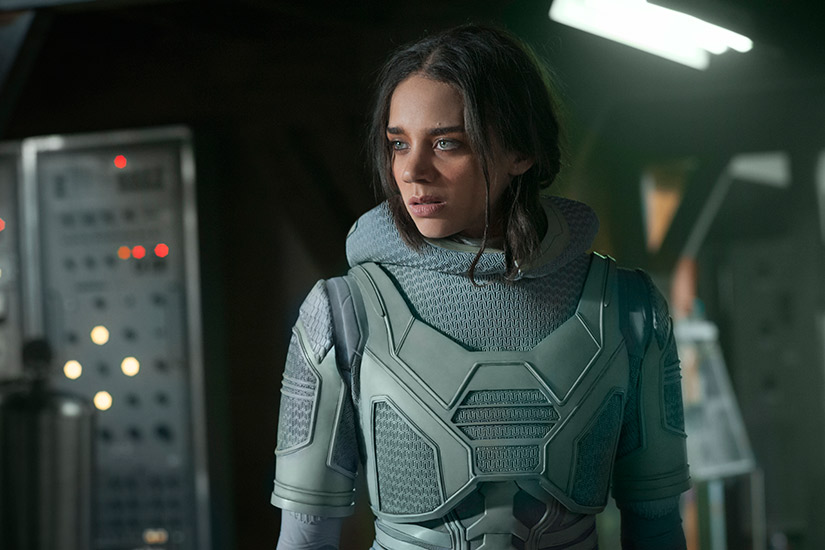 Ant-Man and the Wasp, Marvel’s latest action-filled romp, is still a week-and-a-half away from hitting the big screen when we meet up with star Hannah John-Kamen and she is excited and more than ready for fans to finally see it. “It’s so nice to even talk about the character a little bit right now,” the 28-year-old Brit says.

But this is a Marvel movie we’ve met up to talk about it, so there’s not that much John-Kamen can reveal. Still, keeping the Marvel Cinematic Universe’s highly-guarded secrets wasn’t a problem for the actor. “I’m a stickler for rules,” John-Kamen explains. “I’m a fan and I don’t want to know, I don’t want things to be spoiled myself, so it was quite easy to not spoil anything.”

John-Kamen is also no stranger to the spoiler-filled world of sci-fi/fantasy. She’s had roles in genre favourites Black Mirror, Game of Thrones and this year’s Ready Player One, but is perhaps best known for her double role on space adventure drama series Killjoys (which just so happens to be a Canadian co-production). In Ant-Man and the Wasp, John-Kamen stars as Ava, a.k.a. Ghost, a woman with the dangerous ability to phase through solid objects who goes to extremes to steal potentially life-saving tech from the titular heroes (Paul Rudd and Evangeline Lilly).

We caught up with the star in Toronto to chat about joining the Marvel Universe and playing the villain.

Congrats on joining the Marvel universe! How did it feel when you found out?

Honestly, it was absolutely amazing. I couldn’t believe it, I’m still pinching myself. I’m a huge fan of the Marvel movies myself and of the first Ant-Man as well. It was just incredible to invited to join the team.

Were you a fan of the comics?

I have grown up with comic books in my life, but do you know what? It was the he-who-shall-not-be-named DC comics. [Laughs] I loved Arkham Asylum and the Joker, also some Superman. I adored Harley Quinn, she’s a cool bad ass.

I really do feel like it has come at a great time. I think we all need it after Infinity War [ed’s note: no spoilers!], we need to laugh!

That’s something that’s great about Ava. She’s not really out for destruction, she’s just trying to save her life.

Well, that’s the approach I had with the character. She’s not just woken up one morning and thought it would be hilarious for world domination whilst twiddling her evil moustache. She’s got a goal and a purpose, and a very righteous one. Yes, she’s the antagonist and the threat to our heroes in the movie, but I think she’s misunderstood.

You’ve played antagonists before. Is that always the approach you have with those characters?

I always do. It’s important to, for me, because life isn’t black and white and people aren’t black and white. As an actor, you’ve got to believe what you’re doing is truly good, and the audience has to connect with you and see that humanity.

In the comics, Ghost is a male character. What was it like to take on this genderbent role?

It was amazing. The great thing is that there’s not a lot on the character; there’s no origin story in the comic books. I had a lot more freedom to take the character and really give her life and be the first person to play Ghost. At first, of course, it’s very daunting because it’s a huge responsibility, but it’s been an honour.

Do you have any favourite moments from set?

A special memory is the first time I put that suit on and walked on that set and the sheer size of it. I will never forget that first day and just being completely embraced by the Marvel family. Also just doing a fight scene with power, it’s very cool. Fighting Evangeline (Lilly, who plays Hope van Dyne, a.k.a. the Wasp) was fun.